What I Don't Want To See Vs. Louisville This Weekend

Why my frustration with USF football isn't about the won-lost record. Seriously, it's not.

Share All sharing options for: What I Don't Want To See Vs. Louisville This Weekend

What I don't want to see vs. Louisville this weekend... is the expression on those two USF defenders' faces.

That is a look of confusion, fatigue, and looking for answers that they know deep down aren't coming.

Those faces are why I'm angry with the leadership of USF football. Not the 2-4 record. There are scenarios where I could accept USF being 2-4. Florida State, Rutgers, and Nevada are all very good teams; one bad bounce on the road against a decent Temple or Ball State team, and there you are. Somewhere, there is an alternate universe where USF is genuinely unlucky to be 2-4 right now, and will spring some upsets to end up with 7 or 8 wins.

This is not that universe.

But you wouldn't know it from Skip Holtz's public proclamations. They have mostly been of the "remain calm, all is well" variety, and promises of improvements that should be evident by now if they're coming. Even after the Florida State game, I said USF could have a successful season if they could apply that level of performance to Temple, and learn from their mistakes. Instead, we got... well, look at the picture again. And that image doesn't even capture the players' hands-on-hips stance, the traditional stance of tired defenders.

(As an aside, I don't mean to pick on those two players. The emotion they're showing seemed to permeate the entire team, especially the defense. Those were just the two players that happened to be on camera.)

Now let's put those confused faces into perspective. That image is from just before a key 3rd-and-9 late in the Temple game. USF had scored to cut the lead to 30-28, and needed a stop to get the ball back with about four minutes to play. Here's what happened: 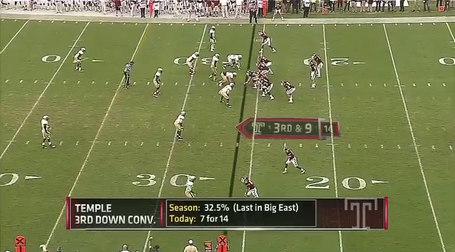 Temple lines up in the shotgun. Note from the graphic that the Owls are not good at converting third downs, but did so at a good rate against USF.

The play is a quick flare screen to tailback Montel Harris. Frankly, this is a bad play. Harris gets the ball six yards behind the line of scrimmage, on the short side of the field. There's no running room, and no deception in the play that would create any. The running lane is narrow, and DeDe Latimore (standing on the "0" in "30") is in the right place to fill it.

Harris cuts left behind his blocking, but Lattimore and Tevin Mims have proper angles. Surely this play will be stopped for little gain.

Lattimore and Mims converge on the Temple tailback as they should, but he carries them for additional yardage. More Bulls join the struggle to bring down this 5-foot-10, 207-pound, 2-star recruit.

With more than half the Bulls defense now involved, Harris finally squirts out of bounds, only two yards short of the first down.

In football, as with most things in life, we gauge success on results: Wins, losses, points scored, points allowed, third down conversion rate. But I think this play exemplifies how football games are decided by things that don't show up in the box score. By any objective measure, the USF defense did its job. They got a key third down stop. They got their offense the ball back, and gave themselves a chance to win the game. But individual actions within that play, and before it, and the attitudes of both teams all game long, revealed who was going to win that game.

Skip Holtz is fond of saying "we're X plays from being Y and 1." That might be true on some level, but being one play away is not a random variable. As I said in the post-Florida State "moral victories" piece, football games are decided in key moments, and USF has consistently been losing those moments. Yes, they got a "crucial third down stop" in the above play, but they got pushed around doing it. USF later botched a field goal, and took a five-yard loss on a 3rd-and-1 running play, both at important moments when the game was still winnable. That's not luck, folks.

There's a famous quote that "luck is the residue of design." USF football is not showing a lot of design these days. And that's what I think USF fans are upset about. I think they're less upset about USF being 2-4 than they are that USF football's current leadership looks increasingly incapable of directing this football team. Some people have taken to the pejorative "Kragholtz," but I think there's a more USF-specific parallel to be made here.

Before he achieved fame as Selection Sunday's LOLcow, Seth Greenberg was the head basketball coach at USF. He was here for seven years to the day, which is fitting for a man whose leadership often seemed like a Biblical curse. Greenberg needed only two years to take the Basketbulls from terrible to average, and then spent the next five years infrequently flirting with above-average. Then he went to Virginia Tech and repeated the same pattern.

That Montel Harris play in the Temple game reminds me of the opposing player and game that convinced me Seth Greenberg would never lead USF to the NCAA Tournament. His name was Shawn Daniels, and he was a power forward for Utah State. He was about 6-4, built like Charles Barkley, and otherwise unremarkable. His opposite, USF's B.B. Waldon, was four inches taller, and was so long and strong and athletic that he seemed to be part greyhound.

Utah State won that game, largely because Shawn Daniels ate B.B. Waldon for lunch. While Waldon relied solely on athleticism, Daniels understood positioning and leverage and technique. On offense, he faked Waldon into the air to get free for baskets and draw fouls. On defense, Daniels out-rebounded Waldon because he was always in position while Waldon never was. At times Waldon looked to the sidelines for guidance, with an expression on his face much like the ones in the lead photo.

And this competence edge extended to their whole team. Whenever Utah State wanted to change a play, their point guard stuck a number of fingers in the air, their entire team knew exactly what to do, and they did it. South Florida trying to change a play was like a game of QWOP. And USF's point guard was Reggie Kohn, one of the better ones in school history. That game indelibly betrayed Greenberg's weaknesses in tactics and technique.

Granted, this is not a perfect analogy. USF football's problems seem less about tactics and technique, and more about mindset and preparation. And unlike Greenberg, Holtz has at times exhibited the qualities that have been missing of late. So I haven't completely lost hope, but I definitely need to see some improvement.

And I don't mean wins. I mean better performance, better execution, better focus. No more botched plays, lackadaisical tackling, confused facial expressions, poor performance at key moments, and further promises for improvement. Yeah, everybody wants to win, and so do I, to be sure. But from what I've seen so far this season, I think USF football would be better served by a good performance in a loss than a bad performance in a win. That's for this season and the future.

And everything ought to be in line for a good performance. USF is coming off an extra week of preparation. The opponent, Louisville, should inspire a strong game from the Bulls players. The Cardinals are ranked, but have looked vulnerable. USF won its last trip to Louisville, under Skip Holtz, with many players from that game still on the roster. The depth chart has been re-evaluated. USF can win or lose Saturday, but there's absolutely no excuse for this team to look as disheveled as it did against Temple. And that's what I'll be watching for.