You Can't Spell "Schadenfreude" Without "USF"

After the Bulls duff'd it against Temple, USF fans took to every form of the Internet they could think of to rip into USF football's lack of success in the past two seasons and to call for the firing of Skip Holtz. Let's take a look!

Share All sharing options for: You Can't Spell "Schadenfreude" Without "USF"

Yes. USF lost again. And yes, it is perfectly reasonable to be incredibly angry with the way this football team has performed in the past two seasons. Ever since the win over Clemson in the 2010 Meineke Car Care Bowl, USF simply has underachieved.

No, underachieved isn't the word. USF has sucked.

In three short seasons, USF has turned from a national threat to anyone who saw them on their schedule, to that guy who went out drinking the night before his test because he only needs a C- to pass and then gets a D. There are plenty of observations as to what exactly is our problem, game to game. Many see the secondary playing too aggressively and giving up big plays. The drops from the receivers have easily cost the offense a handful of points, and could possibly have changed some games. And many blame coach Skip Holtz, as is typical of struggling teams' fanbases. As guys who are here to bring you the news of the team from a fan's perspective, we typically use snark and satire to mask our rage for the crappy play of our team. But there are those who aren't quite as word-savvy as we. USF fans took to the internet following USF's signature "WTF" loss of the week, their fourth in a row, this time to Temple. And the outrage was clear.

Our first stop on this magical adventure is at everyone's favorite irrational USF fan hub, The Bulls Pen. The forum has been notorious in the past for harboring members of the fan base that get worked up and turn to the Internet, looking for other enraged fans to validate them. I'm already prepared for one of them to read this post and then get pissed off and yell about it in a new thread. (Note from Jamie: Both Collin and I were longtime posters there before I started this blog.)

Anyway, as the loss was really sinking in, forum user USFBULL18, who I assume made his account in a rage, which would explain the all-caps, started a thread simply titled "FIRE SKIP HOLTZ!!!", so you knew there would be rational conversation about how this program could move forward.

The thread was received with much agreement, as expected. There are four pages of rage-y goodness in addition to all that as well. It's reminiscent of that time two weeks ago when USF lost to Ball State and the Bulls Pen guys decided it was probably a good idea to go get a "Fire Skip Holtz" billboard taken out. That idea seemed pretty popular, too. Because, you know, that's exactly the message we want to send to the rest of the country, and prospective coaches if you got your way, about our university.

(Another note from Jamie: If you want to take out a billboard, be a little more clever than that. Like this:) 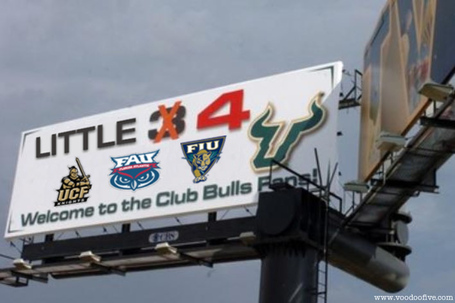 Obviously things didn't stop there. If you're looking for some fun USF conversation after a bitter loss, look no further than Greg Auman's blog. Not in the actual posts, but in the comments section. One of them has 369 comments(!), which I assume is some kind of record. Here are a few select comments from some of Greg's posts since Saturday afternoon: 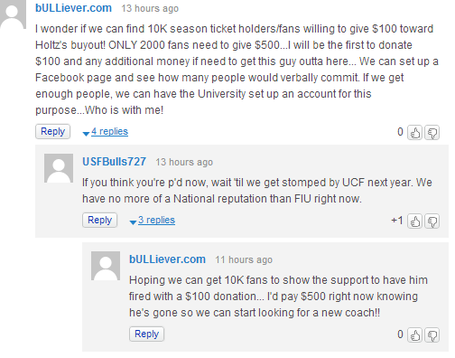 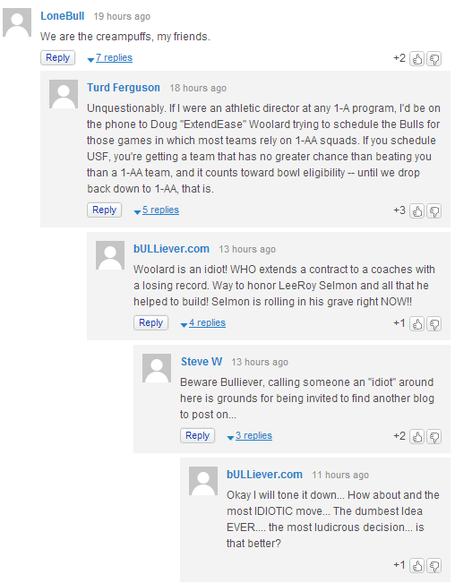 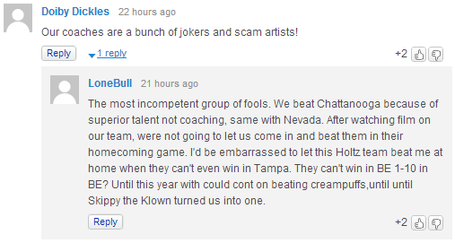 First of all, scam artists? I do not think that word means what you think it means. All in all, Auman's three posts after the game have accumulated 369, 74, and 83 comments, respectively. But wait, there's more! In a separate conversation, we here all agreed a while ago that making a "Fire{insert coach's name}.com" site, regardless of how bad the team looks, is not the proper way of doing things. Welp, SOMEONE MADE ONE AND IT IS HORRIBLE.

SkipHoltzMustGo.com is a delightful Web site that has all of three pages. The homepage is pretty much what you see in the picture -- a butthurt posting about Holtz's record. The second page is a copy and paste from Skip's Wikipedia page. The third page is an updated record sheet of Holtz vs. the Big East. I assume it will continue to be updated weekly as long as USF maintains a losing streak.

My personal favorites are the Facebook groups dedicated to rounding up people who probably don't give any money to USF athletics and getting them to boycott the athletics program until Holtz is fired. The page entitled "Official Fire Skip Holtz" is the main one, obviously, because it's official.

Since its inception after last year's season-ending loss to West Virginia, the page has racked up 539 likes. I didn't even know there were that many people who were aware that Skip Holtz was the USF football coach. Then, there's this: 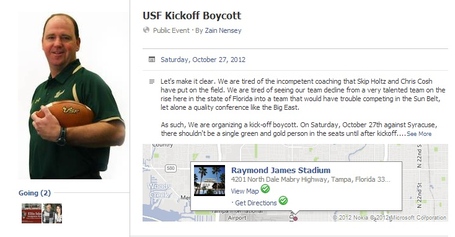 So now these guys are trying to rally up USF football "fans" and get them to boycott the opening kickoff of the USF homecoming game against Syracuse on October 27. That'll probably go well. (And how can you be "Going" to an event that requires you not to go somewhere?) 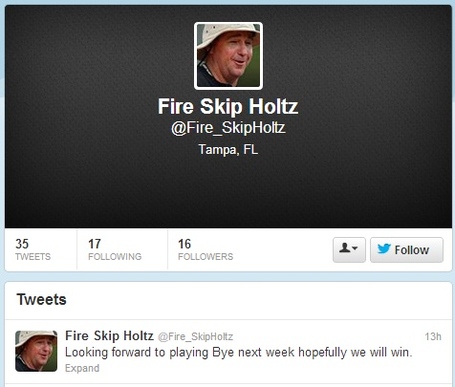 The Fire Skip Holtz Twitter account is an outlet for some fan to anonymously state facts that we all already know about USF's football record, and express dismay for the way things are going, all using a minimum of proper sentence construction. Clever! Then there are people who are using their actual Twitter accounts to say what they're thinking about how much they want Skip gone. 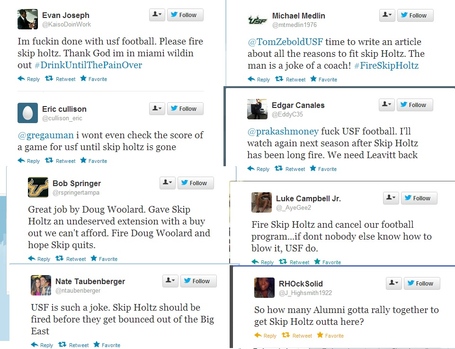 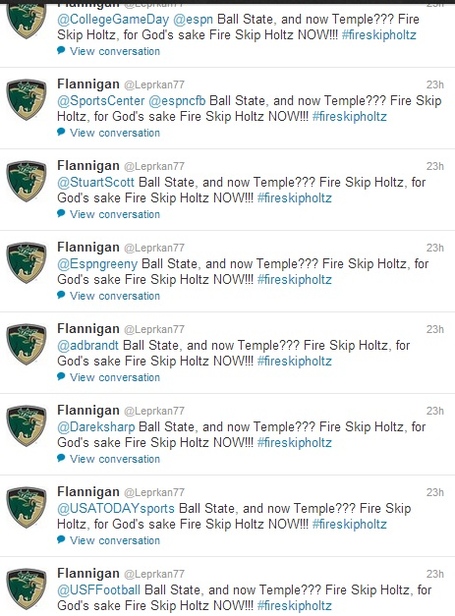 Fact: Just because you announce your opinion to everyone who could possibly know what you're talking about, it doesn't mean they're listening.

I get it. We're all upset that our team sucks this year. Maybe you're all right, and firing Holtz is the right answer to send this team back in the right direction. We're a young but proud program that has gotten accustomed to winning. But remember when we all thought Stan Heath had to go? And then he found some players that really fit his system and started winning basketball games? 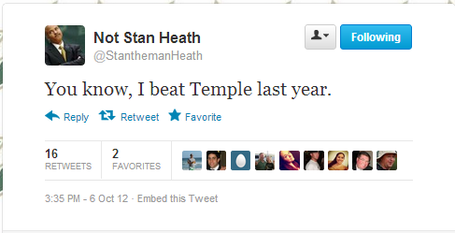 So couldn't it then be a good idea to at least ride it out for another season before we start getting feisty? I'm not saying you're wrong for being upset, and you're not even wrong to question whether Holtz is right for us, but this team isn't going to go anywhere without support. Besides, as Collin already pointed out, firing Holtz just really isn't an option financially right now. So we've just got to relax and hope that we figure things out in time for the new Big East setup next year.

Until then, tweet and comment wisely, everyone. Here's a funny one, just to show that there's no hard feelings. Or maybe it's to show that ignorance really is bliss.