The Ghost of USF Christmas Present visits our athletic director and shows him just what a mess things have become, all on his watch.

It's time for Part 2 of our story. If you missed Part 1, you can read it here.

Doug Woolard is standing in his bedroom, a little shaken as the Ghost of USF Christmas Past departs. He doesn't have to wait long, though, as another ghost appears.

The ghost appears. It's B.J. Daniels.

DANIELS: Doug, I am the Ghost of USF Christmas Present.

B.J. and Doug appear in a conference room early on a Monday morning. Bill McGillis is going on and on about some minor detail from Saturday's football game. The staff looks physically and mentally exhausted.

DANIELS: Oh, just another one of the super-early death march staff meetings following a game, because whatever trivial matter worked McGillis up into a lather can't wait until a normal hour of the day.

WOOLARD: What could possibly get him that worked up?

DANIELS: I don't know, some TV not tuned to the right channel? Anyway, when this is done, he'll go tweet about this meeting using some kind of upbeat gibberish. And these people will go back to their jobs and take it out on their staff, even if they don't mean to. This is how morale gets low and people decide to quit. Do you think this is how the best athletic department in the Big East is supposed to be run? You know about these meetings, don't you?

They leave that conference room and appear in another one, where some kind of financial presentation appears to be going on.

DANIELS: In this meeting, you're seeing the new financial projections when a new TV contract finally gets signed.

Woolard looks at the numbers on the screen.

WOOLARD: That can't be right! Is that... less than what we get right now?

DANIELS: Yeah. You get a little more from TV, but you also made a lot of money off NCAA tournament units before, and there won't be nearly as many now. There may be years where the Big East doesn't get the one spot in the access bowls, so you can't count on getting playoff money every year. And casual fans aren't going to come buy tickets to all these uninteresting games, and then you make less money off parking, and merchandise sales, and fundraising's going to take a hit... and don't forget all the conferences who are going to get much, much more money now. They get a lot more, and you get less.

WOOLARD: I guess we'll have to go back to the students to cover the...

DANIELS: Uh, I don't think so. They already told you they weren't going to go along with your newest request. I think they figured out how much of the bill you already stick them with and don't want to bail you out anymore.

WOOLARD: But how are we going to cover all the debt service on the Athletics Village and the Sun Dome?

Next they appear in Stan Heath's office. He is on the phone with someone and he sounds upset. 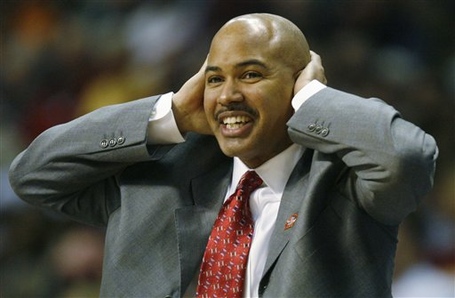 HEATH: I know, this is ridiculous... this used to be the best conference in the country... yeah, you saw that rumor too? That the Catholics might let UConn and Cincinnati play in their league? Unbelievable... I mean, is this even a major conference without them?... What am I supposed to tell kids who want to play here? "Hey, you'll get to play against Tulane and East Carolina and SMU and your folks will never see you on TV!"... Right, and what do I tell the kids who already came here expecting to play the best of the best? Are they going to want to leave?... Yeah... maybe I'm the one who should think about leaving...

DANIELS: He's just frustrated, but you know you can't get anyone as good as him to come here if he leaves for a better job. And there are going to be plenty of better jobs out there now. By the way, your soccer coach and your softball coach are mad too. This new conference is going to be horrible for them. They're only your two best sports, though, so no big deal, right?

Woolard and Daniels leave Heath's office and reappear on the north patio of Raymond James Stadium during the FSU game.

DANIELS: Hey, how many people do you think are on this patio?

WOOLARD: I don't know, how many people do you think are on this patio?

DANIELS: Well, I bet it's not 11,000. I don't think 11,000 people even fit out here. Not even close. You know that's how many tickets to this game went unused, right? And that even if people were standing here, they would have counted as being in the stadium? And if there were really 11,000 people here and they were students, then the student sections would have been almost completely empty, right?

WOOLARD: Why are you telling me all this?

DANIELS: Oh, did you not see this? 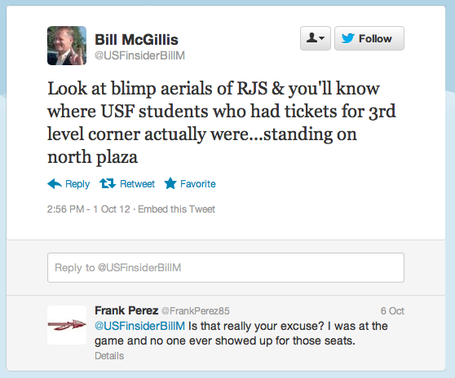 As Woolard looks at that, they appear in Judy Genshaft's office as she is on the phone with UCF president John Hitt, haggling over a statement they will issue together.

DANIELS: I mean, it makes sense for both of you to do this, and they're just as screwed as you are... but do you really think your fans will be OK with this? You spent years and years proving you were better than them, on the field, on the court, on the diamond, not batraping kids, not getting on probation, not costing the school millions of dollars in a civil trial... there was no debate. Now you want people to accept that we have to cooperate with them? How did you get us in this position?

Woolard is silent as they reappear in his bedroom.

DANIELS: All of us worked our asses off to try and make USF succeed. I hurt myself three times because I tried so hard. Maybe too hard. What did you do for us? You built some buildings that you may not be able to pay for anymore. What else did you do? Anything? How is USF better off than it was when you got here? If this was the private sector, and you were the CEO, and you had to explain all this to your stockholders, do you think you'd still have a job?

DANIELS: Well, as bad as things are now, they could get even worse... but you'll see for yourself...

Daniels disappears. Doug is clearly not looking forward to the Ghost of USF Christmas Future, but he knows it's around the corner.