Since when does USF basketball care so much about getting highlights on the SportsCenter Top 10?

Share All sharing options for: The Airing of USF Basketball Grievances, 2012 Edition

As I did in 2010 and again last year, I'm taking the occasion of Festivus to hold an airing of grievances toward USF basketball.

Now, compared to some of the other grievances we have with USF this year, this one is very, very minor. And we want to be careful how we air this grievance because we don't want it to fall on the shoulders of the staffers who are actually doing this, because I'm pretty sure that this is something they're being told to do.

But since it is Festivus, and grievances must be aired... when did USF basketball become so obsessed with getting themselves into the SportsCenter Top 10 every game?

#SCTop10 nominee with the Anthony Collins to Victor Rudd alley-oop ... Collins sent that pass from the other 3-point line

In case you missed it, @usfmbb's Victor Rudd made @sportscenter's Top 10. Worth another look, or two, or three...gousfbulls.com/mediaPortal/pl…

Victor Rudd once again makes #SCTop10 coming in at No. 8for his game vs. Bowling Green

You know what this reminds me of? You know how random people on Twitter with like 18 followers will start asking celebrities for retweets? It's really annoying when they do it, right? Well, what's different about USF throwing #SCTop10 into a tweet every time someone makes a big play in a basketball game? They're basically asking SportsCenter for a RT. It's needy. It's something that small schools do for publicity. And on Friday night it was such a priority that they got all of Victor Rudd's game-saving and game-winning shots sent off to ESPN, and then they couldn't post the box score to their own Web site correctly. I had to use Bowling Green's box score to write my game recap. (I wrote this post late Saturday night, and the link still didn't work. Maybe by now it does.)

Now, like I said, I have a feeling this was someone else's idea, and not something the staffers decided to start doing on their own. We can't prove it, but this kind of preening does fit a certain profile in department management. Possibly someone higher up, who also tries to draw attention to USF's minor accomplishments... 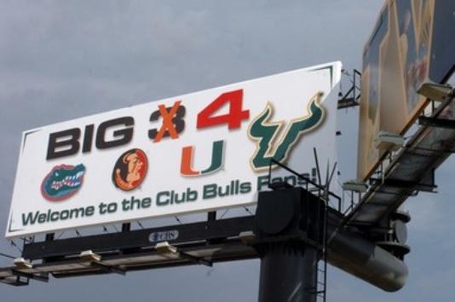 Look, it's only December. You'll have plenty of time to make SportsCenter when conference play begins and you have at least a half-dozen chances to beat ranked teams. And then you won't even have to tell anyone about highlights, because they'll already know. Shilling for a five-second highlight where the anchor also has to mention you needed triple overtime to beat a lousy team… it doesn't seem worth it. For now, just worry about keeping the lights on until the game ends.