Share All sharing options for: Bizarro NCAA Football 13 Simulation - USF In The ACC

Florida State and Clemson moved to the SEC. Louisville and BYU joined the Big XII. The ACC added Pittsburgh and Syracuse, then picked off the other four "legacy" Big East teams (Rutgers, UConn, Cincinnati, and USF) to get to 16 and match the SEC. The Big East was restocked with C-USA teams but lost its autobid to the Mountain West, because Boise State and San Diego State remained there. Everyone else stayed put.

How did USF do? Well, it was another long season. 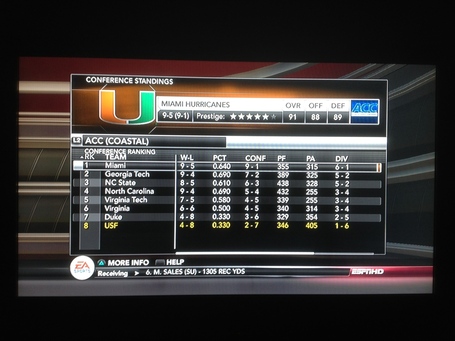 We're not surprised to see USF at the bottom of the division, are we? The Bulls' only ACC wins were against Duke and Rutgers.

More details (and the great moment in the history of the ACC Wheel of Destiny) after the jump.

First, let's take a closer look at that 4-8 season for USF. 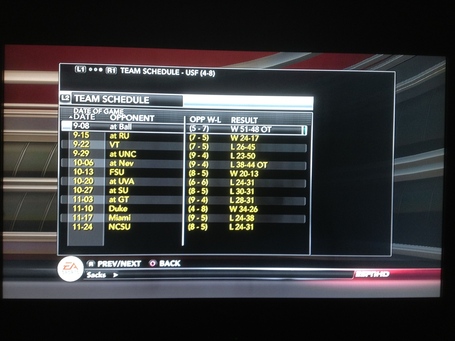 It was another year of close losses and meltdowns. They needed overtime to beat Ball State and gave up a ridiculous 48 points in the process. They wasted a 27-3 third-quarter lead to Syracuse and lost by a point. They coughed up a touchdown to Nevada with a minute to go, then lost in double overtime. North Carolina blew their doors off. But hey, USF beat Florida State again! That almost makes up for everything else that happened. They s'posed to be SEC!

The Bulls' stats? Not good. 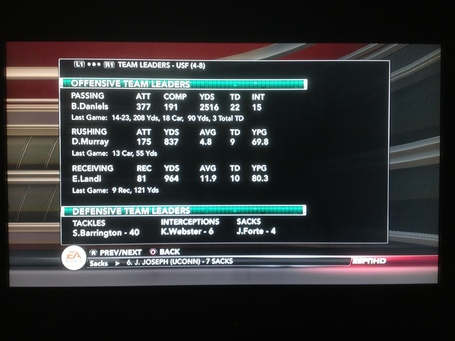 B.J. Daniels barely completed 50% of his passes, although he was the team's second-leading rusher and added seven TDs on the ground. But the pass distribution was pathetic. Only Evan Landi, Andre Davis, and Sterling Griffin caught more than eight passes. Chris Dunkley completely went to waste (six catches for 179 yards, but three touchdowns). Sam Barrington actually had 90 tackles when you add in assists, but if Julius Forte leads the team in sacks with 4.5, something's gone horribly wrong with Ryne Giddins.

Enough about USF, though. Their season was the basic catastrophe you probably expected. You may have already figured out that Miami won the ACC championship and went to the Orange Bowl. But you'll never guess who they played in the ACC Championship Game. 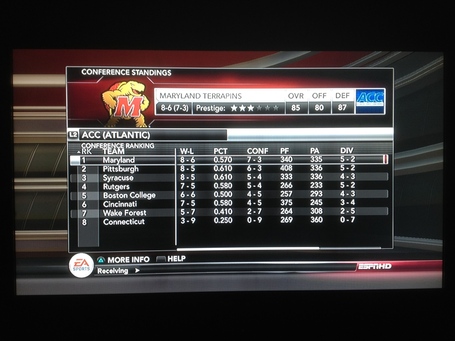 Yes, despite roughly 45,000 player defections and Edsall being Edsall, Maryland somehow won the Atlantic Division and earned the right to get dusted by the 'Canes in the title game. Never has the ACC Wheel of Destiny spun so crazily, as Pittsburgh slipped from an early 6-1 start and lost a critical home game against the Terps to finish second in the division. In the Coastal Division, Georgia Tech handed Miami its only ACC loss, but when the Yellow Jackets were beaten by Virginia and NC State, they gave away the division crown.

Overall, the ACC was horrible. Like, 2010 Big East horrible. No one won 10 games, even with bowls included. They got destroyed in their BCS bowl again, and no one in the conference finished the season ranked. (Georgia Tech led the league in the "Others Receiving Votes" category.) Even Louisiana-Lafayette, the Sun Belt champion, managed to come in at #25. #GoodJobGoodEffort, ACC! A truly pathetic showing. Which everyone would probably sweep under the rug like they have for most of the last decade. 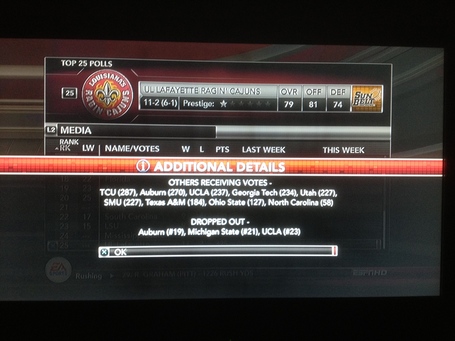 Actually the entire season was very lopsided. Only two BCS conference teams lost less than three games. One was Kansas State, who went 12-2, won the Sugar Bowl, and finished #3. The other was the undisputed national champion at 14-0. 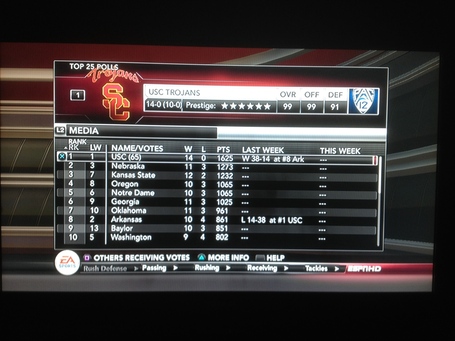 USC buried a three-loss Arkansas team in the national title game. As for the other BCS bowls: