Process: We Had 10 Guys on The Field in Goal Line D. TWICE IN A ROW!

Share All sharing options for: Process: We Had 10 Guys on The Field in Goal Line D. TWICE IN A ROW!

Look, it was a win on the road in a tough place to play against a good opponent in Nevada. Congrats to the Bulls, they showed a bunch of heart and character down the stretch. But as we've said here before, it was bad process, good outcome.

And if the Bulls keep making massive mistakes in terms of process, time and score, as well as clock and game management, they're going to get killed against better opponents. We've already mentioned somehow managing to get three penalties on two two-point conversion attempts, but what follows is as big a Dumpster Fire as you might see from any team all season.

With the Bulls trailing 21-20 with 10:35 left in the third quarter, Nevada's Stefphon Jefferson runs it up the middle on 2nd and 4 to the Bulls 2 yard line, setting up 1st and goal for the Wolf Pack. The defensive players for the Bulls on this play were Juju Forte, Luke Sager, Todd Chandler, Tevin Mims, Mike Jeune, Sam Barrington, Mike Lanaris, Kayvon Webster, Mark Joyce, JaQuez Jenkins, & George Baker.

The Bulls make several substitutions to get into goal line formation, but the ones you can see here are Cory Grissom and Ryne Giddins running on the field, while Forte begins to run off. 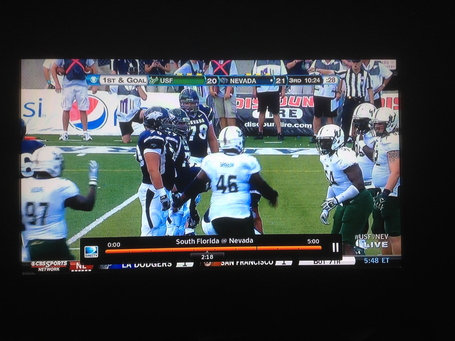 Here you can see Forte bolting for the sideline, which is the guy I saw sprinting off from the stands (we were sitting about parallel with the play here) just as someone behind me said "oh no, we've only got 10!!" 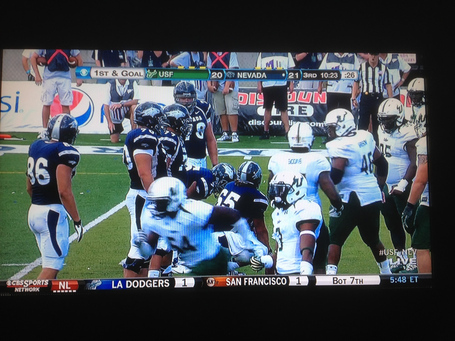 This is just before the snap on first down, and the Bulls line up with Giddins, Chandler, Sager, Grissom, Mims, Jeune, Barrington, Joyce, Jenkins, & Webster. 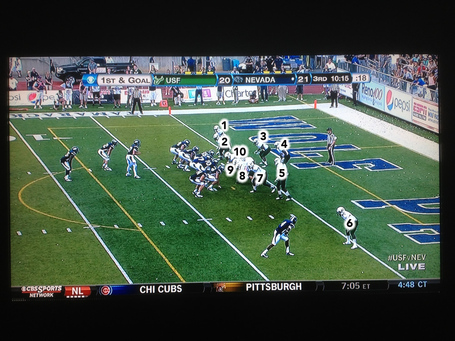 The result of the play was a 1 yard gain for Jefferson, as he was tackled by Todd Chandler. Since I only counted 10 as well, I was staring at Forte as he was still standing at the edge of the Bulls sideline which ends at the 25 yard line by rule. I was looking for him, or at least someone, to check in the game on the next play. That never happened, so for the second consecutive play we lined up with the same 10 men. Again. 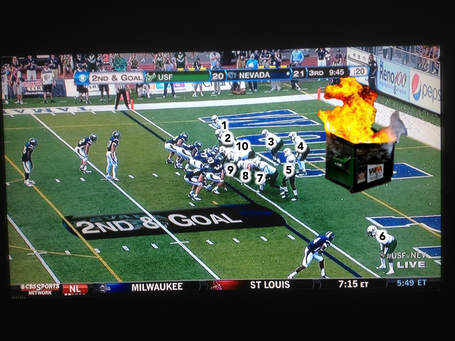 Of course we are USF, so you know the result: Nevada's Nick Hale runs up the middle, Barrington kicks the ball out of his hands to force a fumble, Jeune recovers, and the Bulls dodge a massive bullet. All with 10 men on the field. Twice. 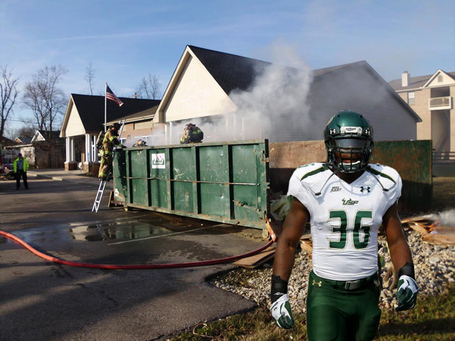 Well I guess this fire is... (takes off visor shield), extinguished!
YEAAAAAAAAAAHHHHHHHHHHHHHHHH!!!!

Try not focus on the result, but the process. This is one of at least a dozen crazy breaks the Bulls caught on Saturday, as the Gods were absolutely shining on them. But football coaching is about putting your players in position to succeed, and using the maximum allowed by the rules on the field is a good start. Add this to the wasted timeouts, the inability to get set on offense, the general confusion... it ran rampant all day. And it's got to stop beginning tonight.

We're big fans of Skip around here. He's building a program for the long-term, doing and saying all the right things, adding character guys that fit his system and represent the school with class, and, well, we like the cut of his jib. We're a bit shaky on an extension after a 5-7 season (as we'd be for any coach), but we think he's the right guy for this program. But to get us to that stated goal of a Big East title, things like this just can't continue to happen.