Thanks to USF Cheerleader Amy Phillips (@Ameliaaa_P) via Greg Auman for this one.

Share All sharing options for: USF vs. Louisville Haiku

You want USF
Athletics pared to a pic?
#FIREEVERYONE 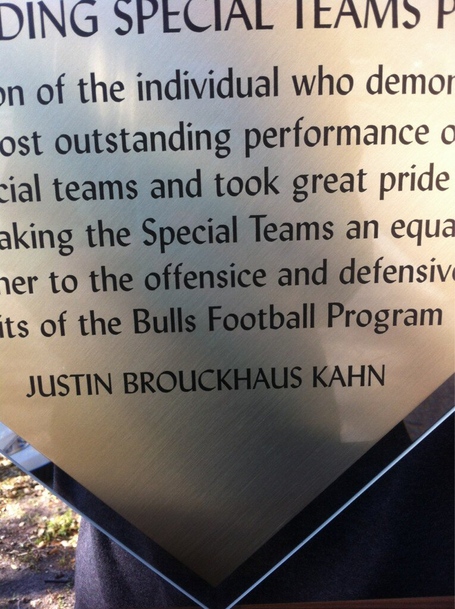 The Bulls lost by 18 because they are not a good basketball team. We are going to finish last in both men's basketball and football in the Big East this year. Louisville is still a legitimate Final Four contender, and Siva & Behanan are really good and Russ Smith is insane but we knew all of these things already. There were possibly more Louisville fans in the building today than USF fans. I would generously estimate that about 150 students of over 40,000 showed up to watch the #12 team in the country play on campus.

But this is the indelible image of the day for me. Justin Brockhaus-Kann played five years for USF. He was honored today at halftime with most of the other seniors from the 2012 class (which impressively has graduated 24 of 25 members already). And in his final season, JBK was deservedly given USF's Special Teams Player of the Year Award. But on that award, while mentioning that special teams is just as important as being a defensive or "offensice" player, they can't even spell his name right. What an absolute joke.

Someday, JBK and many of his teammates are going to be successful either in football or out of it. Someday, a development officer will hopefully engage them to give back to the program that gave them the education from which they launched their career paths. And things like this are the last images they'll have of their time in green and gold. It's a metaphor for everything we're doing wrong at USF Athletics presently. It's half-assed, on the cheap, and cutting corners. And it has to stop now.