The "USF Things" Bracket: Vote On Round 1 In The People Region

Time to start voting! We'll start with the first-round matchups in the People Region today.

Share All sharing options for: The "USF Things" Bracket: Vote On Round 1 In The People Region

Before we get started, I want to make sure you are aware there's been one change to the field. We've replaced "Sinkholes" with "The Oracle" as the 10-seed in the Things Region. I know that the Oracle staffers would probably like a higher seed, but unfortunately I don't think the campus at large views it quite the same way that they or I do. But I'm happy to add it to the field. It should have been there in the first place. My apologies.

The idea here is to determine what is the most USF Thing. My intention when I seeded the teams was to rank the regions based on their impact or popularity on the school, from the biggest positive impact to the biggest negative impact. But I know that the definition of a "USF Thing" could mean any number of things to any number of people. So you can vote based on whatever criteria you want. (Although I hope you don't advance the Fletcher Walmart, because that place sucks.)

There is one wild card here. If any matchup gets less than 50 votes, the results will be nullified and the Voodoo Five staff will determine the winner. So we're counting on you, the readers, to mobilize if there's something you feel strongly about. Tell your friends and neighbors about us. We always like adding readers and fans.

We'll do the entire first round over four days this week, one region at a time. Then next week we'll get from 32 teams all the way down to the final 2, and on Championship Monday we'll decide the winner. First up is the People Region.

Polls are open TODAY ONLY, until midnight Pacific time, or 3:00am in Tampa. May the most USF Thing win!

Here are summaries for each of the first-round matchups in the People Region. Voting is at the bottom of the page.

Judy's been the president of USF since 2000. She's helped build the university into one of the biggest urban research centers in the country. She also made this commercial, which has not yet stopped being funny.

Parking Services got the #16 seed because they're the only people on campus who irritate literally everyone, whether it's students, faculty, staff, or visitors. Rarely has the word "services" been such a misnomer. Won the Aggravating Campus Entity Conference's automatic bid after steamrolling Aramark in the tournament final.

Unknown symbol of USF fan exuberance, Singlet Guy exploded on the scene after the Bulls' win over West Virginia in 2007 thanks to this photo: 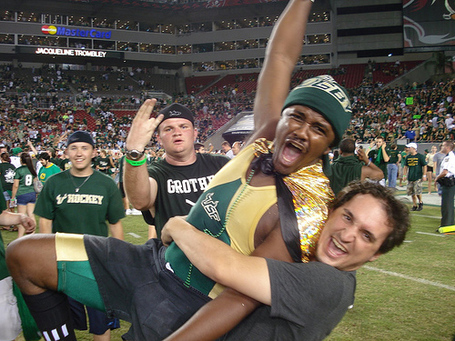 Castor was the president of USF from 1993-99. She pointed the school on its current research path and played a big role in not only getting the Bulls into Conference USA, but also in starting the football program.

Grothe was the mohawked riverboat gambler quarterback of the football team from 2006-09. He still holds the USF and Big East records for total offense, and was on the field for several of the Bulls' most notable wins. Also likes the #1 combo at Chick-Fil-A with sweet tea.

I'm not entirely sure Hulk Hogan actually attended USF, but he beat Gallagher in the Former Students of Dubious Fame Conference final to get the autobid.

USF's nationally-acclaimed dance team, the Sun Dolls are ambassadors of Florida sunshine and beauty, decked out in green and gold Lycra and sequins.

Brother Jeremiah and his friends hold court in between the Education building and Cooper Hall occasionally, telling passers-by that they are gay and/or going to hell because... I don't know, they happen to be in their line of sight and within earshot, I guess. Pulled an upset over the USF Hillel to get the Religious Organizations Conference bid.

Collins is the point guard and undisputed best player on the USF basketball team, whose mere addition to a derelict 2010-11 team turned the Bulls into an NCAA Tournament squad in 2011-12. Wore a Toy Story bandage during a game.

Sara Nevins is a boss. She has a microscopic ERA, holds USF softball's all-time record for strikeouts (with a season and a half still to go), and led the Bulls to their first Women's College World Series last year. Probably underseeded by the committee.

Leavitt was the undisputed builder of the USF football program. In his 14 years in charge, the Bulls went from literally nothing to a BCS conference and national rankings in three straight seasons. Will hopefully get his due when enough water passes under the bridge and certain people involved in his firing have retired.

Speaking of which, it's our athletic director! He really needs no further introduction, other than to say he got a #14 seed because there are a lot of people at USF who don't care about sports and therefore are not bothered by him. In the Mostly Inept Athletic Administrators Conference final, the teacher outdueled the student as Woolard knocked off Bill McGillis to make the field.

One of the most beloved figures in USF history, who was a key figure in the formation of USF football, then served as athletic director from 2000-2003 before stepping down and returning to his role with the USF Foundation. May not be a coincidence that things really went to crap in USF athletics after his untimely passing in September 2011.

Tony La Russa is the most decorated athletic USF alumnus. He made the playoffs 14 times, reached the World Series six times, and won three championships, one with the Oakland A's and two more with the St. Louis Cardinals. After the third title in 2011, he retired with 2728 wins, third-most all time.

(2) PHYLLIS MARSHALL vs. (15) STUDENTS WHO WEAR OTHER SCHOOLS' GEAR

Nowadays, countless USF students know the Marshall Center is named after her without even knowing who she was. Marshall started out as USF's first women's residence instructor, but she quickly became the face of USF student life, and eventually became the director of the University Center in 1975. She was so beloved that in 1987, students lobbied the Legislature to name the building after her when she retired, which it was in 1994. Marshall died in 2005, and unfortunately did not get to see the gleaming new building that also bears her name.

And then there are the fools who wear their Gator and Seminole gear on campus, even though they're USF students. You're here, not there, so get over it. If you need a USF shirt, go see Judy. She gives them out to people like you. (They got in the field by crushing Students Who Sign Up For Upper-Level Classes Just To Argue With The Professor in the Irritating Students Conference tournament.)