The "USF Things" Bracket Champion Is...

The votes are in, and it's time to announce the most USF Thing.

Share All sharing options for: The "USF Things" Bracket Champion Is...

It's finally time to announce the winner of the USF Things Bracket. We began with 16 people, places, things, and sporting events in the middle of March, and you cast your votes to get those 64 things down to a final four. In the semifinals, Lee Roy Selmon prevailed over the Sun Dome, and the USF-West Virginia 2007 football game knocked off Rocky D. Bull to reach the finals.

The pundits were predicting a victory for Selmon... but that's not what happened.

With 57% of the vote, the USF-West Virginia 2007 game has been named the Most USF Thing.

Winning the USF Things Bracket means you get a treasured Voodoo Five medal, an award I just made up a few minutes ago. Since an entire game won the award, and since we don't have any photos of this game in our database, we've decided to award this medal to Matt Grothe's college meal of choice, a #1 combo from Chick-Fil-A with sweet tea. 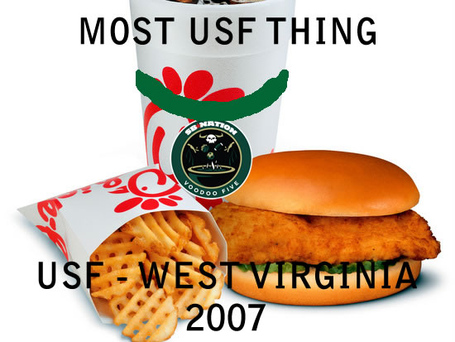 Congratulations to everyone involved in that game, including the players, the coaches, the fans, Pat White (DNF), Rich Rodriguez, and the Yankees hats that the Mountaineers wore off the team buses. I wish we had a higher high than this to celebrate, but it was still a pretty great night.

Here's the entire completed bracket if you want to see the round-by-round results. Thanks again for participating!