FAU vs. USF Film Room. The Offense: Its Gone From Suck To Blow

Note: We'll have much more grandiose thoughts about the FAU loss and what it means to USF Football in a big picture sense tomorrow, but we're still cobbling that together. It's a process, and the team isn't the only one that hit rock bottom after that loss. Expect lots of angst and writhing and such, but hopefully it'll be well-written.

Share All sharing options for: FAU vs. USF Film Room. The Offense: Its Gone From Suck To Blow

The USF Offense is Mega Maid:

So if the offense sucked under Skip Holtz... well, you see where we're going here.

Exactly how do you lose by a combined 50 points in two games at home against one team below the Top 100 in America and one in the FCS? Simple!! Miss blocking assignments. Drop passes on those rare occasions when you do actually get to a first progression. Have defenses teeing off on your offensive line because they couldn't block a sorority from a Manolo Blahnik sale. Start three different QB's with some combination of bad feet, noodle arms, not nearly enough athleticism, or terrible mechanics. And stuff all of these things in the shell of an offense no upperclassman on the roster was recruited to play in, so barely anything fits their skill set. It's like the perfect storm of horrendous!!

Let's break some of it down scientifically for as long as we can before the tears start again. On 2nd and 10 from their own 35 with the Bulls down 11 in the 4th quarter, USF lines up here in 11 personnel: 1 tight end (Sean Price, who runs a passing pattern), and 1 running back (Marcus Shaw) as well as their five offensive linemen. FAU blitzes their nickel DB Cre'von LeBlanc (lined up against slot receiver Derrick Hopkins), as well as their mike LB Adarius Glanton.

Since FAU has four down lineman here, it's six on six: six blockers versus six players rushing the passer. This means get rid of it quickly because you're not going to have much time, or run a screen or draw play to catch the defense overpursuing.

When the nickel blitzes, Shaw completely whiffs on him. Left tackle Darrell Williams also gets smoked, so Bench steps up into the pocket to buy some time. When he does he keeps running into more trouble as his leg gets grabbed by Robinson Eugene of FAU, who just pushed back right tackle Quinterrius Eatmon with an inside move like he was barely an impediment.

But the final blow comes from FAU's DT Trevon Coley, who was playing the "A" gap between right guard Lawrence Martin and center Austin Reiter. Martin and Reiter both stay in to block Coley, but after the pocket breaks down Reiter fails to hold his block at all, and Coley peels off from the A gap to the other side of the line and behind the line of scrimmage to drop Bench. It was a complete protection breakdown of epic proportions on a play where you wouldn't have much time anyway.

It also doesn't help that no USF player recognized the blitz and checked to a hot route or audible. Price seems to run a 5 yard stop, though I'm not sure if that's a "jerk" route where he reads the sam LB or just the designed safety valve of the play. But Bench takes the shotgun snap and still drops back 4 steps, which you should never do on what is basically a jailbreak blitz.

So other than the line getting whipped by a team that was 3-9 in the Sun Belt last year and a very unimpressive 0-2 going into this game, it also looks like USF failed to adjust to what it saw out there. Good times!

There's no clips available of the FAU goal line stand in the 2nd quarter, but check the alignment USF came out in on 3rd down: 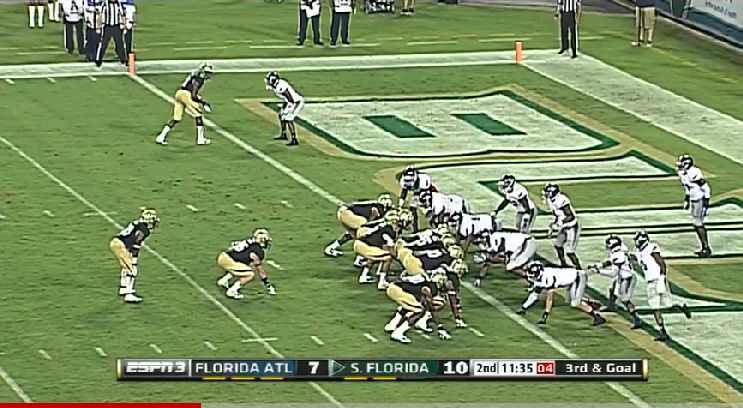 You can't see it here, but it's straight power to the edge with both tight ends motioning to the near side pre-snap, but fullback Ryan Eppes totally misses his block on FAU's Keith Reaser. Reaser gets in Shaw's way, and Jeremy McKnight just blows up his C gap to give enough time for Randell Johnson (#15 on the left edge of the line for FAU) to shed his blocks to get the tackle.... and by blocks I mean NOT A DAMN SOUL TOUCHED HIM AND HE CAME IN COMPLETELY UNBLOCKED. 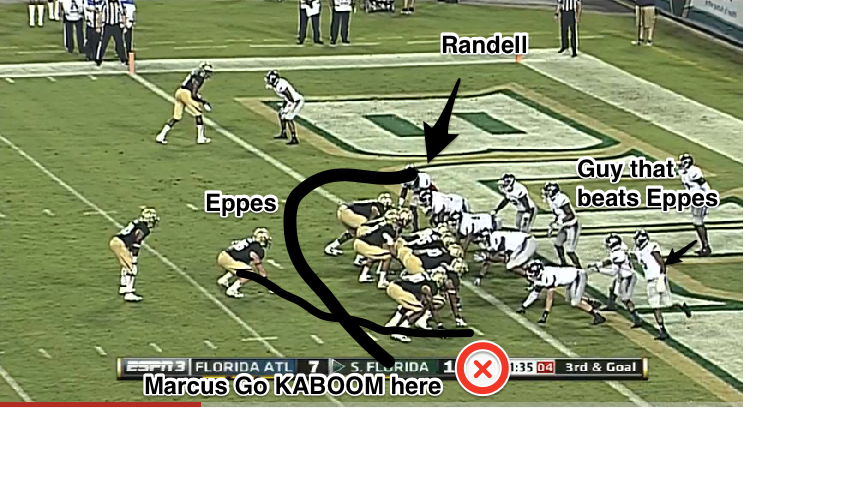 And before you ask no it wasn't a zone-read type play where you intentionally leave a player unblocked as you "read" him so that no matter what he's always wrong (defender runs after the QB, QB hands the ball off... attack the RB, QB keeps it and loops behind defender). This was a coverage breakdown exacerbated by terrible execution.

And then on 4th down, here's how the Bulls came out: 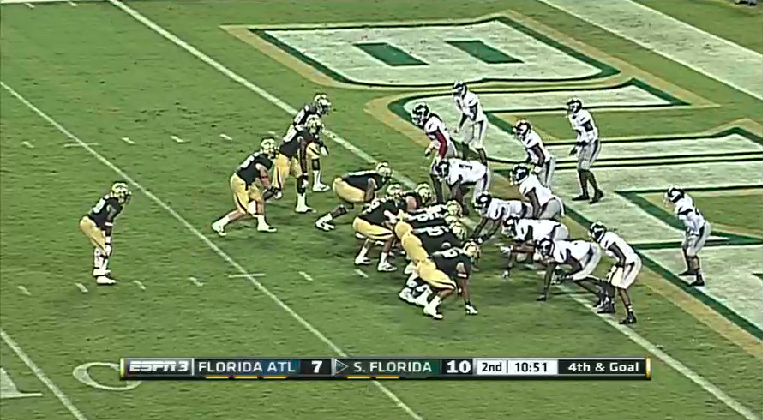 The Bulls go with 22 personnel (Shaw & Eppes at RB, Price & Mike McFarland at TE) & six linemen, and motion Eppes down to for a tight bunch on the left side. But FAU literally blows up every guy to the left of the center and Shaw never has a chance. Once again it's Randell Johnson running amok in the backfield for one of his three tackles for loss on the evening, and the second one in a row. And if it wasn't Johnson, it would have been one of the calvary of three more guys behind him that were unblocked as the ball left the tackle box.

Here's the jist of it: 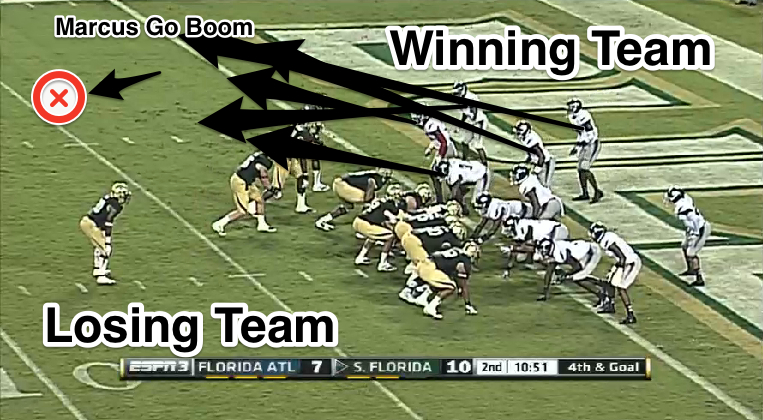 You can put this on the players not being very good, but it's also on the coaches to make sure they're in a position to succeed. Where's a sprint option play down here around the goal line to give Bench a chance to make some choices? USF ran an old-school option left earlier in this series, and the pitch to Shaw went for a 41 yard gain that set up 1st and goal at the seven. What about a misdirection or even a naked with a tight end running a drag across the back of the end zone? These are all plays that might help keep the defense guessing just enough that they're forced to stay home instead of selling out against the run here.

Coach Taggart, your thoughts on the offense?

#USF coach Willie Taggart: "I told our guys we're looking for playmakers. If they're out there, come see me.''

Well besides Andre Davis and Marcus Shaw, you don't have any. Sorry about that, but it's why we fired the other guy. You can thank previous management, and don't forget he took another one with him to Louisiana Tech.

#USF coach Willie Taggart: "We're trying to find every which we can to find some offense.''

OK now we're talking! Assuming you find this blog in your quest (sorry about the Spaceballs vid, dark humor is our crutch), can we make a humble suggestion from our couch?

How about some screens and misdirections that might help give our undertalented linemen a chance to hold their block just a breath longer? If defenders begin to realize that if they get out of their gap they'll have to stay home more, and that could give your terrible array of quarterbacks just a hair longer to make a decision or actually find a second progression on a passing play.

Screens and misdirections are a very small part of what Stanford does (the team that Taggart worked for previously and one that runs a very similar offense to what he wants to do here), but asking the personnel USF currently has to line up and hit the guy in front of them hard enough that he moves backwards might just be asking too much. These guys aren't good at all at what you want to do... so help them out a little.

In basketball this would be a team that should play a ton of zone defense and jack up a bunch of threes hoping enough go in that on the right night they can beat someone. They just don't have the horses, so play the math and give yourself a punchers chance. Right now, it's most likely the best way to win.

We understand that's not the culture Coach Taggart wants for his bus passengers. He wants to play very physical football, and build a program around hitting people hard and wearing defenses down. But he just doesn't have the horses for that right now. And if the square peg he's trying to fit into the round hole of his roster doesn't start to get a bit more circular, 0-12 is certainly a possibility.

Note: If USF is just playing possum until Black Friday, then open up everything in the playbook and springing it all against C. Florida... we're not opposed to this plan.