Welp, this sums it up:

One of the big problems this USF team has is they aren't very fleet of foot. They're twitch-quick in places (see Corey Allen, John Egbunu), but that's reaction quick and not speed quick. So sometimes it's hard to quantify how much of USF's defense is lack of effort and how much is lack of raw speed.

But against SMU, it was often a lack of effort. In transition, in the half court, on offense... basically all aspects of basketball. The Bulls couldn't stop anything SMU was trying to do as the Mustangs shot 27-53 from the floor (just 1-9 from 3 too), scored 42 points in the paint, and 18 off turnovers. They dominated on the block, and did so in both the half court and secondary transition.

I can't figure out how to pull video clips, but here's some still shots of what we mean.

Here's possibly the most basic offensive play you'll ever see. Nic Moore (#11) as the point guard passes high opposite to Markus Kennedy (#5). 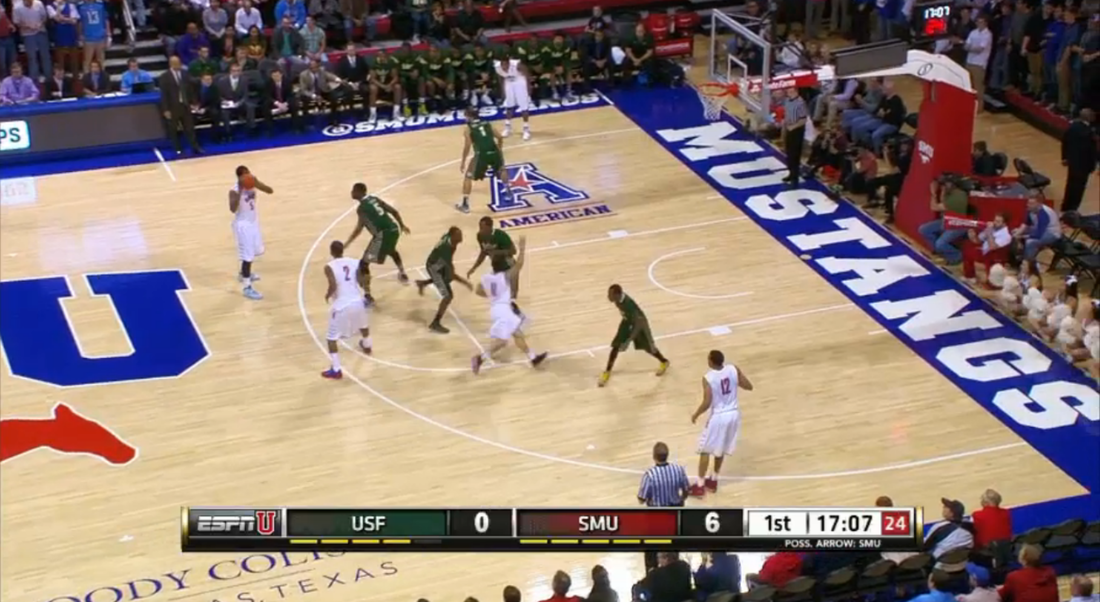 Moore comes down and sets a screen for freshman Sterling Brown, who averages 3.7 points per game. Brown runs the world's most pedestrian flex cut ever... but look how open he gets. 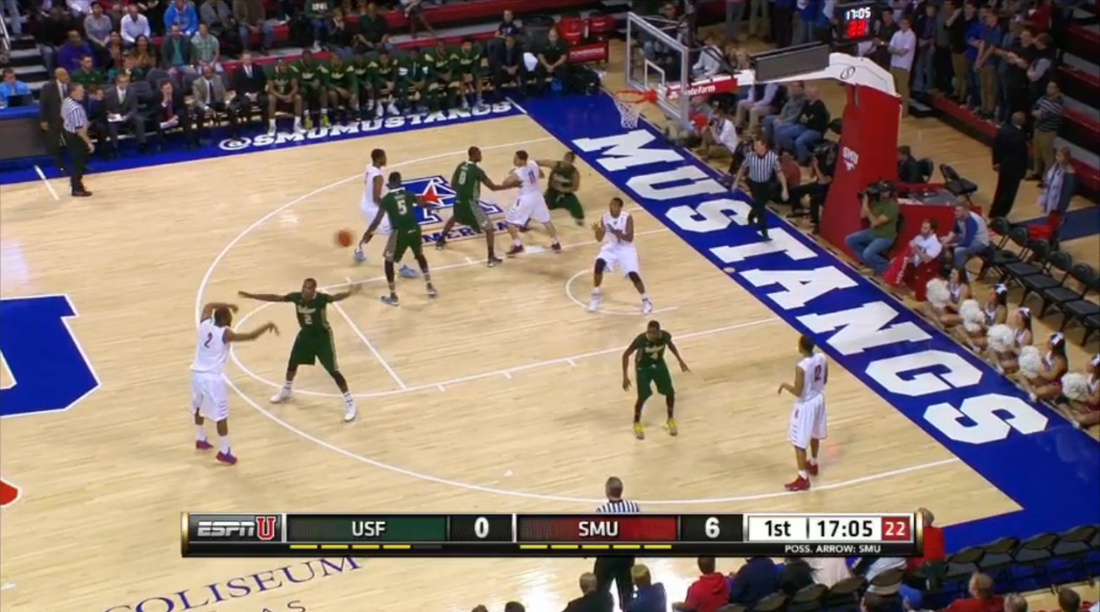 Either Musa Abdul-Aleem has to get over that screen a helluva lot faster, or it needs to be switched and Martino Brock needs to pick up the guy that's now wide open under the hoop. With a guy that scores 3.7 points per game... you can't be switching it. Abdul-Aleem eventually gets there, but fouls Brown as he's going up conceding two free throws. Teams generally aren't running stuff for guys that score 3.7 points per game this early, so this could very well have been an action to set up something later in the possession, or Larry Brown decided to target Abdul-Aleem, who's consistently been a poor defender this year. But it can't ever be this easy.

Moore passes to Keith Frazier (#4), who rubs off a Kennedy elbow screen. Ryan Manuel (#1) runs under the backboard from the right to the left, so this looks like a version of the "wheel" play that's been a basketball staple since forever. 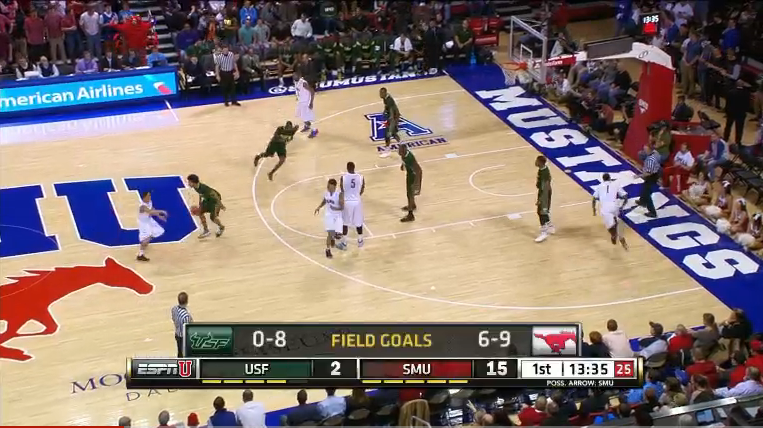 Kennedy sets up a ball screen, but Frazier instead passes back to Shawn Williams who filled in at the top of the key, while Kennedy decides to slip through to the rim. 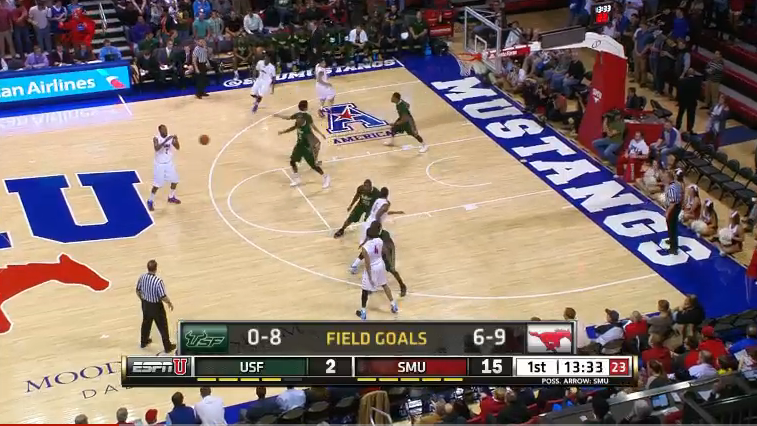 Chris Perry was guarding Kennedy (SMU's leading frontcourt scorer), but look how open Kennedy gets on the lob that goes over Perry's head for the easy dunk. 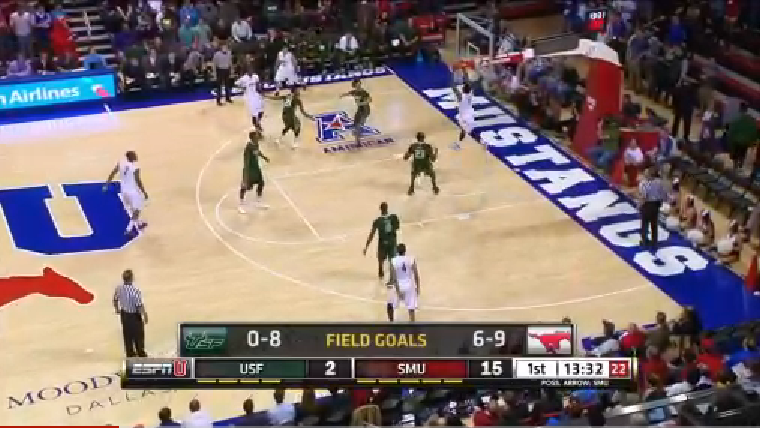 Some credit goes to SMU here for running some really basic basketball things effectively and unselfishly, but if you watched the game, you'd see just a total lack of hustle and heart from the Bulls.

SMU didn't get out and run, but they did a lot of things in secondary transition (not a true fast break, but what happens shortly thereafter). Here's a missed three from Abdul-Aleem, notice the ball is still in the air on the way to the rim, and time on the clock is 7:13. 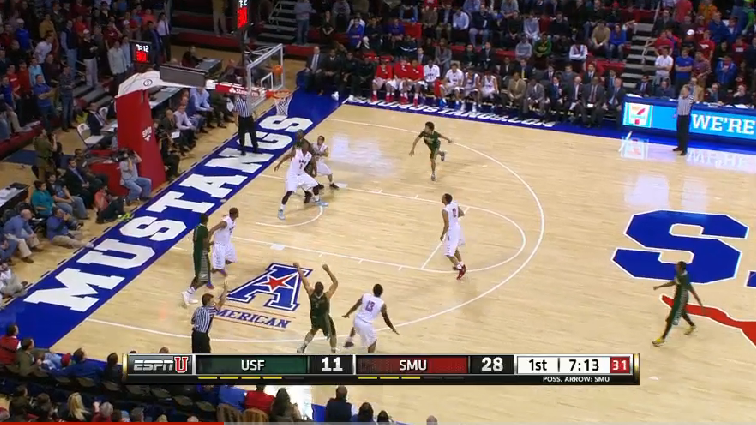 Williams corrals the rebound, finds Moore, and just seven seconds later you see Kennedy is on the block getting excellent position. He scores an easy bucket after this simple entry pass from Moore. 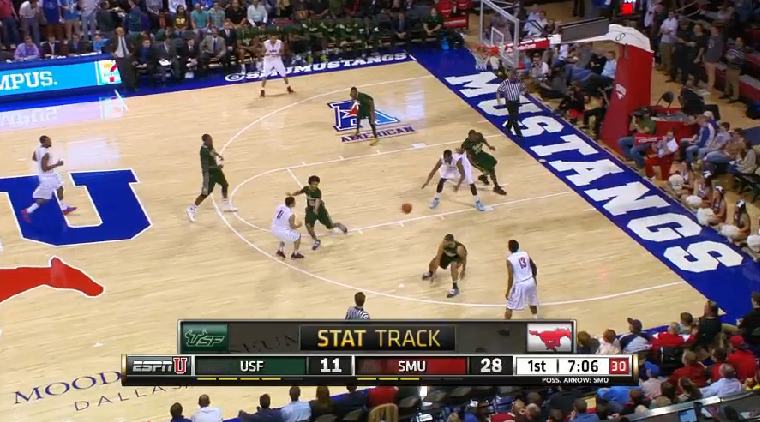 SMU had their way because USF simply didn't make them work hard enough to score points. It was an awful 13-0 to start, and the Bulls never cut it below 12 points the rest of the game.

Would a healthy Anthony Collins help this team? Of course. But the effort and hustle wasn't nearly good enough last night, and it's been that way in multiple games this year. This team goes through stretches where they play hard, but longer ones where the needed intensity isn't there. Last night might have been the most glaring example so far this season.

Vic Rudd going 2-13 doesn't help, and neither does 17-53 from the floor as a team (though 5-17 from three, which for this team is serviceable). But it was the defense and the lack of effort that sank the Bulls last night. They'll need to fix that, and fast, to be competitive the rest of the way in AAC play.