Josh Heath Could Play Against Temple, And How This Could Help

Could a solution to the point guard problem already be on the roster?

Share All sharing options for: Josh Heath Could Play Against Temple, And How This Could Help

Earlier this week, Stan Heath said he is thinking about removing the redshirt from his son Josh Heath, a true freshman. Beat writer Joey Knight thinks this will happen, and then some:

Heath fils is a pure point guard who led Tampa Prep to a state championship last season, averaging 6 assists and 11.9 points per game. He was not an elite recruit, mostly sought after by Ivy League schools and other small Division I teams, plus DePaul and Stanford. He also has a great hairdo.

Coach Heath was careful to downplay any impact Josh might have, saying:

It's not fair in some ways that he hasn't had a lot of games underneath his belt and you just throw a guy like that in the fire... I know he's not going to be ready ready, but there are some things I think he can do from just making decisions and making plays to make things better and take Corey Allen Jr. off the ball a little bit.

With Anthony Collins presumably unavailable until further notice, Corey Allen Jr. has been forced to play point guard, and the 2-3 zone defense has become kryptonite to the Bulls offense.

First, let's see how Collins' skill set can unravel a 2-3 zone. Here's a possession from the Detroit game:

Collins has the ball. Look where the Titans' top two defenders are: they're all the way above the three-point arc. There's plenty of space for the big men to cut into and get open.

Also, the top two defenders are awfully close together. Why is that? Probably because they've seen film of AC knifing to the free throw line and hitting that little floater shot of his. Their positioning takes away that option, but at the expense of defending the passing lane. The top player of the two is in poor position to deny a pass to his side.

So Collins passes that way, to Shemiye McLendon. Look how many options McLendon has. Martino Brock is cutting to the low post, and there's no one near him. Victor Rudd has looped to near the free throw line and has a little room to operate between the two layers of defense. John Egbunu is posting up against Detroit's Jermaine Lippert, who is about three inches shorter. The Bulls have options.

McLendon feeds Egbunu. Egbunu is well-positioned to put a post move on Lippert, or maybe dish it to Brock if Brock's nearest defender leaves him.

Lippert would then foul Egbunu, sending him to the free throw line. But it's a good possession against a 2-3 zone. The players found space, and set up a good scoring opportunity.

Since Collins has been out, the Bulls have faced a different kind of 2-3 zone. Since I don't have any screen grabs of the Las Vegas or Houston games, I'll borrow Collin's artful description:

That Houston zone is so soft a pillow manufacturer should sponsor it, and the Bulls have absolutely no answer.

What he means by that is that the players atop the 2-3 are further back, and those on the sides are further in. Like this: 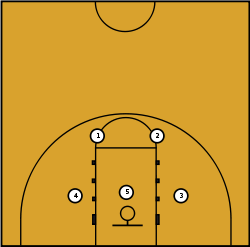 This kind of positioning makes it difficult to get the ball inside, because the passing lanes are much narrower. This tighter zone comes at the expense of not being able to defend USF's three-point shooters... but that's a trade any opponent will make, because USF's long-range shooting has been awful. Especially coming off the dribble. USF's only decent three-point shooters at the moment are Allen and Victor Rudd, who are more effective coming off a pass, or when they have room to create a shot.

If freed from running the point, Allen can find other ways to attack the 2-3 zone, such in this play from the Detroit game:

After almost a solid minute of USF passing the ball around the perimeter, Allen receives the pass in the top left corner.

Allen fakes his man into the air and drives baseline.

But USF isn't getting that play with Allen forced to play point. They're also not getting Anthony Collins' zone-busting free throw line floater, Collins' ability to shoot threes off the dribble (he's 7 for 18 on the season), or Allen's playmaking ability at the two.

Josh Heath can help a great deal just by bringing those elements back to the USF offense. He doesn't have to be Anthony Collins; just the threat of a long-range shot or some dribble penetration could be enough to force opposing defenses out of the pillow-soft zones as we've seen lately. That would open up space for our scorers to create, and make it easier to get the ball in to our big men.

It's tempting to compare this to the Mike White situation, in which a less-touted true freshman was de-redshirted and thrown into battle mid-season. That offense had almost nothing going for it; this team still has a lot of talented players. If Josh Heath's presence can help the other players do what they do best, and the team can tighten up some other problems (like transition defense), there's still time to have a successful season.