Legit scoop from the law firm of Auman and Knight at the Tampa Bay Times yesterday as junior cornerback Kenneth Durden tells them he will be heading to Youngstown State in the fall to play football.

Durden was part of what was considered to be a unit full of strength and youth for the 2014 Bulls, alongside guys like sophomores Nate Godwin and Johnny Ward. But his January arrest for weed in his dorm room put a damper on his returning to USF, and he sat out of spring practice while facing team discipline.

It's a hole the Bulls should be able to fill, but Durden did have 32 tackles last season as well as an interception. If there's a unit on the field where losing a player with experience would hurt the least, it's most likely the secondary. If he was a running back, we'd be a bit more worried here.

Good luck to Kenneth with the Penguins, who have a sponsorship deal with Tim Horton's. May this mean lots of delicious donuts and coffee in Mr. Durden's future. Otherwise I can't think of anything else distinctive about Youngstown State. Nope, nothing at all. Not a single thing comes to mind. Oh... right. 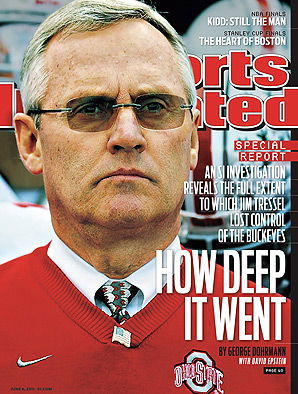 Remember, he's not the athletic director or the coach... He's the damn president of the university!!! This is still the most underreported story in the history of ever. They actually hired a university president that still has a show cause penalty!!! I guess the upside here is that Tressel obviously knows lots of people in law enforcement, which should be able to help get a felony pot charge either reduced or squashed.

Sincerely, all the best to Kenneth in Ohio. Let's hope he finds a fresh start there.