(DISCLAIMER: This contest is for entertainment purposes only. No actual money is being wagered.)

In the wagering world this week, the big news was the suspension of Florida State quarterback Jameis Winston. Apparently he stood on a table in the school cafeteria and yelled a certain phrase associated with an internet meme. This may be the first case in which someone's real-life fortunes were damaged by a poor choice of Internet meme; it's hard to imagine anyone being suspended over Good Guy Greg.

The Florida State-Clemson point spread started at 20.5, then dropped to as little as 10 on Saturday after it was announced that Winston would sit out the whole game rather than just the first half. (We post our final lines on Friday night, so it only dropped to 15 here.) The money line moved accordingly.

The game itself was very close, but Clemson blew a chance to win when C.J. Davidson fumbled late in a 17-17 tie. The Seminoles would go on to win in overtime.

No fewer than four players: DaGata, LeavittTown, LrdNorman, and ULismyhothotsex - had Clemson to win outright on the money line. LeavittTown, who placed the largest bet ($50) on the most favorable money line (+850), would have won $425. On the plus side, several of you did win on the point spread, which Clemson covered easily.

Here are some other plays from the past week as Internet memes. When Alabama opened at -14.5 over Florida, many of you reacted this way:

I still don't have the parlay button working yet - every time I go to work on it I find something else I have to fix first - so for now, email me any parlay bets you wish to place.

Utah had a player do the Heisman pose during their game at Michigan.

But Utah has a right to feel legitimately bad ass, since they won easily in the Big House. So does Mississippi State, the emptiest winning program in America, after they shocked #8 LSU. East Carolina, while not an underdog, hung 70 points on North Carolina to stake their claim to the Group of 5's automatic major bowl bid. 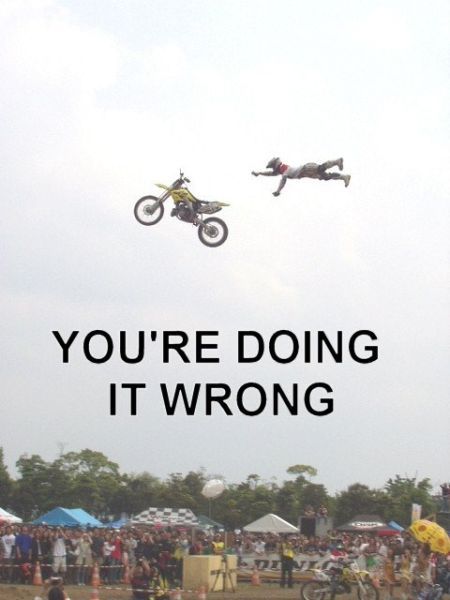 Lately there haven't been lines on FCS vs. FBS games, so no one could bet on this, but we have to point out Louisiana Tech losing 30-27 to Northwestern State. NSU scored 13 points in the last 4:20, aided by Holtz's decision to throw deep from his own 29 yard line with 70 seconds to go in in a tie game.

Also blowing a huge lead was California. The Golden Bears led 45-30 with four minutes to play, and lost 49-45. How did Cal manage to give up 36 points in the fourth quarter? You ought to be able to take a knee every play and prevent that.

With both UCF and Louisiana Tech off the board this week, it was a thin week for spite betting. I give the Randolph and Mortimer Spite Bet of the Week award to dsidwell31 for the "LOL your won-lost record" play of $1.11 against UConn. Honorable mention to DaGata for $1 on Troy State to beat Georgia. (He's a Florida fan, so I assume it's spiteful.) And I can't help but feel there's some hidden significance to ulismyhothotsex's $4.17 wager on Memphis over Middle Tennessee.

The Floyd's Money Team Degenerate Bet of the Week goes to LeavittTown, for making three bold money line bets: $150 on West Virginia +265 over Oklahoma; $50 on Clemson +850 over Florida State; and $40 on FIU +2650 over Louisville. Clemson would have won if they weren't Clemson, and West Virginia gave Oklahoma a closer game than expected. Too bad it didn't work out: all three coming in would have won a total of $1,882.50. LeavittTown aims high.

Honorable mention: tacoman206, for betting Washington at -25000 to beat Georgia State outright... and being in real danger of losing. Georgia State led 14-0 at the half before Washington woke up.

For the record, my criteria for Most Degenerate Bet are, in no particular order and subject to change:

It's one thing to bet on the teams you follow, or teams you know about. To me, being a degenerate is finding a reason to stake big bucks on Wyoming or Buffalo or South Alabama, and then becoming emotionally involved in their game if it turns out to be close.

Upcoming attractions: Can the Bulls cover the spread at Wisconsin? Can Cincinnati get a meaningful victory over Ohio State? Is Missouri-South Carolina still relevant? How about Arkansas-Texas A&M? Tennessee-Georgia? Can Duke beat Miami again? And hey, what about Army-Yale at the Yale Bowl? There should be more FBS games hosted by Ivy League schools.