Share All sharing options for: Those Who Do Learn From History Are Not Doomed To Repeat It

Back in the Seth Greenberg era, USF would always hang around the bubble until the end of the regular season, and then they'd go out on the road in the last game or two and crap the bed against Southern Miss or UAFB or some other horrible team. (Why UAFB? That's another story for another time.) They'd get stomped by 25 points and make sure there was absolutely no chance of postseason play. And now history is repeating itself. The Bulls went up to Chicago tonight to play an 8-20 DePaul team, with an interim coach, in front of about 1500 lethargic fans, and sure enough they got…

The difference between this team and those give-up teams was that tonight, USF made adjustments on offense and kept playing hard on defense. Back in those days, the whole team would go limp when things started fading, and they'd give up like 90 points. Tonight, the Bulls had the poise and the patience to figure out what they needed to do to win the game against a stubborn opponent.

This is going to sound crazy but I don't think the Bulls played as badly as it seems. I know they only shot 38.5%, but they missed a bunch of good shots, especially in the paint and especially in the first half. It was like they were shooting at one of those sleazy carnival rims that's shaped like an oval and the ball just barely fits through it. Even the made shots rattled in. If USF finished at the basket at their normal rate, they would have won going away. The microphones under the baskets picked up the Bulls' frustration several times as shots they normally make teetered on the edges of the rims and then fell off. (Mike Mercer was the most annoyed.) They also fought the ball all night, fumbling passes and struggling to corral rebounds. Even the go-ahead 3-pointer from Dominique Jones came off a loose ball that landed in DoJo's hands.

And what about DoJo? He was ice cold tonight, shooting only 4-for-17. In the second half I lost my cool and tweeted "Y'ALL COME WATCH DOMINIQUE JONES MISS OUTSIDE SHOTS" as he missed another contested three, but he also had plenty of open looks and made practically none of them. That's one of the things i liked about him tonight, though. He didn't have his shot at all, but he found other ways to get involved. DoJo picked up seven rebounds and stayed aggressive with the ball, ultimately scoring half of his 20 points at the foul line. Then, when the game ended up in his hands, he wasn't afraid to take the shot, and he finally made one.

DePaul ran their offense through underrated Mac Koshwal, and the Bulls struggled to cover him. Only occasionally were they able to slow him down, usually with a double-team. He had 24 points, 11 rebounds, and three blocks. Fortunately, other than Will Walker, who added 16, the Blue Demons just don't have enough players to compete with almost anyone else in the Big East. I feel bad for them a bit, because it's like watching the USF of 2-3 years ago. They certainly play hard, and when the Bulls started to get on a run in the middle of the second half, they kept it together and ultimately tied the game.

It was ugly and a lot harder than it had to be, but they won the game and that's the important thing. The regular season ends with a big game on Saturday afternoon against Connecticut, who USF has never beaten. I can hear Jim Calhoun warming up his pithy condescending quotes already. Bring it on, you cranky old bastard. Maybe we can fly this Ken Krayeske guy in and create another postgame freakout.

P.S. Nice cheap shot by ESPNU, putting this graphic up over a long shot of DePaul's interim coach Tracy Webster. I'm not kidding, it was the highlight of the game for me. And it was a source of inspiration... 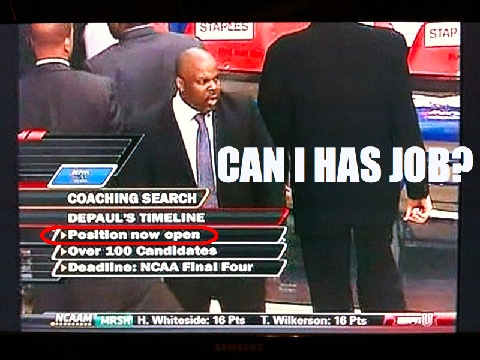