Let's Just Do The Last Four In Lottery Style

Share All sharing options for: Let's Just Do The Last Four In Lottery Style

As many of you have figured out, there isn't a whole lot of difference between any of the bubble teams this year. None of them stand out, but none of them are easy to dismiss, either. That's how you can have just about every bracketologist with seven Big East teams as locks into the field of 65, while Joe Lunardi only has six in his entire bracket. It's madness.

Chris Dobbertean is SB Nation's bracketologist. A little while ago he tweeted:

To everyone, I'm still not convinced the Committee won't draw the last 4 teams in from a Sepp Blatter-model ping-pong ball-filled fishbowl.

That would be awesome (especially if Charlize Theron was involved), but let's make it even awesomer. Put the names of the last 12 or 14 teams under consideration on Ping-Pong balls and throw them in the hopper like it's the NBA Lottery. 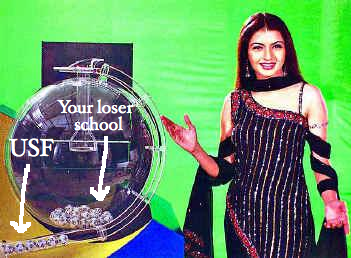 Have all the ADs sitting there on camera watching it happen. Put a couple of guys from Ernst and Young off to the side in dark suits and sunglasses to monitor the draw, and get CBS in there to broadcast it live. We'll even let Gus Johnson do the drawing so he can yell out "Riiiiise and FIRE!" as he opens the air valve to let a Ping-Pong ball push its way out of the hopper.

And if someone almost passes out with excitement like Dave DeBusschere did when the Knicks, ahem, "won" the Patrick Ewing lottery, even better.