Share All sharing options for: USF-Georgetown LiveBlog from Vegas Baby!

Our Las Vegas Correspondent DoJoMojo was nice enough to throw a liveblog together from one of the finest establishments that the city has to offer. Read about it after the jump.﻿

8:59am: We are broadcasting LIVE from the Venetian Sports Book in beautiful Sin City, Nevada, which has the Bulls +6.5, and the total set at 131.5. That’s just too tempting, so I just placed my first sports wager in a decade. Remember NCAA employees can’t bet. Welcome to my sudden falling into sports wagering degeneracy. Viva Las Vegas. 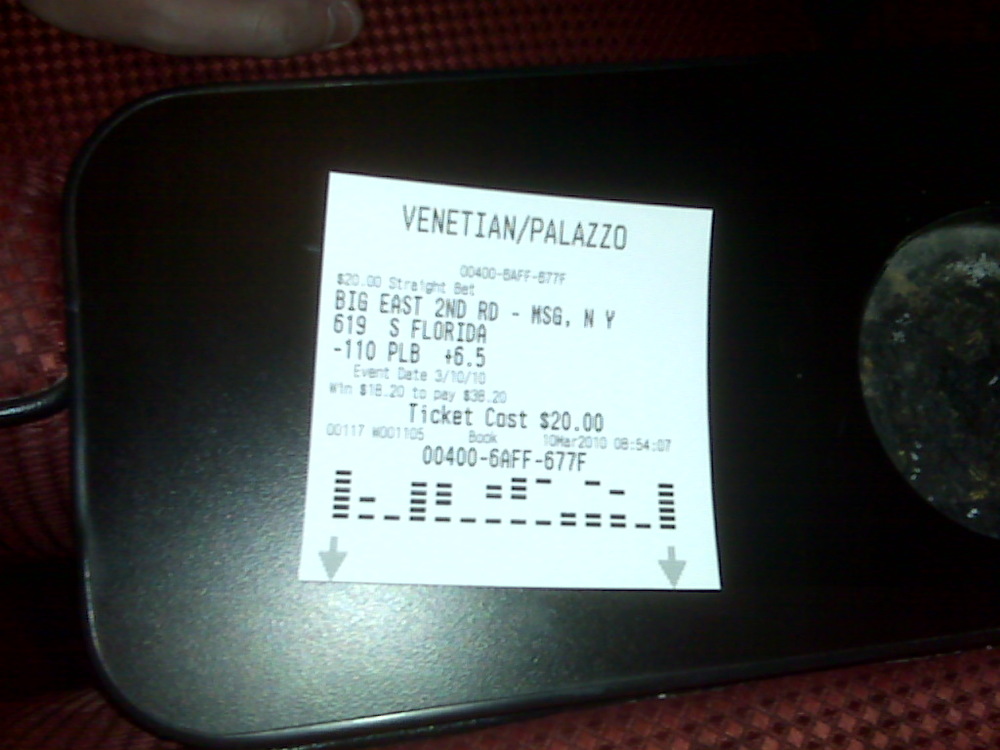 9:02am: There’s a Doris Burke sighting! You know it’s a big game when ESPN goes to the two man/one woman booth.

9:05: Hoyas iso Vaughn for the first hoop, not a good sign. If he gets off we’re toast.

9:06: Fraschilla says JT3 said he was more worried about Howard than Jones. I was at the game in D.C., sitting in front of Howard’s Mom, and he did have one of his best games as a Bull that night. But if they’re really more worried about #3, I’m happy with their scouting department.

9:09: Neither team in sync offensively early at first media timeout. USF stepping into the Princeton cuts effectively, keeping playmakers in front of them. This must continue.

9:12: Fitzpatrick with an excellent swat in the paint, completely ignored by the ESPN crew discussing Freeman’s diabetes.

9:13: Gilchrist 17 footer, butter. That’s gotta be there today. Remember, he didn’t play when we won in D.C. He needs to be the difference.

9:22: Gilchrist gets his 2nd foul with 11 min. left. X-Factor difficult role to play on bench, but Mark Madsen and Jack Haley have shown it can be done.

9:25: Clearly we have never seen a Princeton cut before. Got beaten/embarassed like Robin Ventura on that possession.

9:25: Bulls stagnant on offense, not getting any movement on perimeter. Need to either shoot over it, find better driving lanes, or start flashing to the post. It’s a 2-3 zone, we’ve seen these before. Time to execute.

9:26 Fitzpatrick is not the guy that needs to be shooting over the zone.

9:27: Fitzpatrick just beat on a back cut. Previous possession he committed a bad foul after getting beat on a rebound he should have had. He’s getting tortured right now. Bulls take a time out with 7:30 to go even though they’re in a media timeout zone.

9:29: Dojo for threeeeeeeeeee… airball. Is Reggie Miller available to teach us how to shoot in the World’s Most Famous Arena? It’s a miracle we’re only down 10 right now.

9:30 Just paid $3 for a Diet Coke that’s free everywhere else that’s not the sports book. Plus tip. FML.

9:33 Meanwhile, the expansion to MSG is clearly being built with our bricks. Sometimes basketball is simple. You can’t win if you can’t make perimeter shots. Unless you’re playing DePaul, obviously.

9:36 Famous fouls as the help guy on Monroe, Fitzpatrick checks back in. 21-9 Hoyas 4:35 to go. We can’t play worse, and we’re down 12. Visions of the game at the Verizon Center in January dancing in my head right now. We played an awful first half there too.

9:38: Dojo FINALLY penetrates and gets fouled. Converts 1-2. Did G-Town just miss their opportunity to pull away here??

9:39: Maybe not. Clark with another bomb from three. Going to have to extend on him. Or recruit him.

9:39: "YA’LL COME WATCH DOMINIQUE JONES HOOP AND HARM!!" Ignore the score at 24-12. We are absolutely in this game at the last media time out of the first half.

9:44: Dojo with his patented "Get On My Back I’m Carrying Us Until Halftime When We Can Regroup" runner in the lane.

9:45: Dojo with his patented "Get On My Back I’m Carrying Us Until Halftime When We Can Regroup" runner in the lane AND ONE. His basketball IQ is so high, he even intentionally missed the free throw so Fitzy could get fouled on the rebound. My love for him can’t even be quantified right now.

9:46: But Fitzy just missed his front end. Then Monroe abuses him like Chris Hansen is looking for him on the block. He absolutely must play better for the Bulls to stay in this game.

9:47: Gus blows an easy dunk, leads to a wide open jumper other end. We blow an end-of-half two-for-one opportunity, but Dojo gets to the rim and tips his own miss. Not pretty, opportunity missed there.

Halftime is Hoyas 31, Bulls 19. It isn’t a matter of whether USF makes a run here, but by how much. The Bulls will probably need the Hoyas to start clanging from the perimeter, and will need to do a better job on the back cuts, but you can’t play worse and only be down by a dozen.

Second half line is USF +1.5. Time to put my money where my keyboard is. Double down, yes please!! 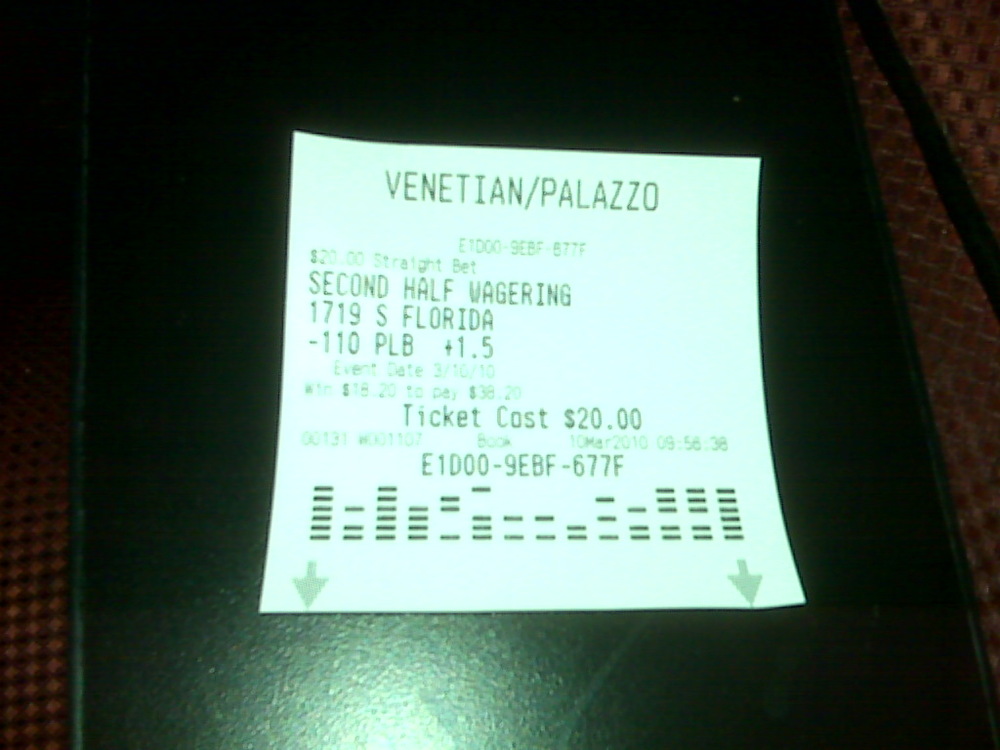 And NOW the guy at the window gives me a free drink ticket. I’ll be saving that one for the Syracuse game tomorrow.

10:06: Fitzpatrick SENDS the opening possession away with no return postage.

10:07: Fitzy ANOTHER rejection. Nique amazing catch in transition fouled on the way to the rim, knocks them both down. Where’s Sun Dome P.A. legend Jason Loughren? "Heeeeeeerrreeee COME THE BULLS!!"

10:09: Dojo drives and drops another dime to Famous, AND ONE. Knocks down the freebie. Team manager leaves bench, heading to dry cleaner to get Suit #3 pressed.

10:10: Famous gets pulled after the free throw (??), the bench rises to greet him. Huge opening minutes from him.

10:14: Dojo picks up his third foul, it’s offensive. But if anyone in America can play with three and play well, it’s #20. Mensa Basketball I.Q.

10:17: Wright with a 3 out of the timeout. Ruled a two. They’re going to have to miss shots for us to get back in this, we need to contest the perimeter better. That simple.

10:27: Howard turnover, Hoyas in transition get a layup from Freeman. 48-36 Hoyas at the second media TO. Bulls made a push, but the score is the same as it was at halftime. That’s a problem. The offense seems to have found its rhythm, but you have to stop the other team as well. If they’re going to get back in it, they need to get stops.

10:31: Howard with an athletic up and under. The penetration is there, the perimeter has got to be there too however.

10:31: Moving screen on Monroe for his 4th foul, 10:31 to play!! That is so big it can’t be quantified. Louie Anderson Big. Phil Hellmuth Ego Big. Remember I’m in Vegas, and this is running commentary.

10:32: Newly found offensive threat Chris Howard fouled, makes one of two. Bulls MUST make a run with Monroe on the bench. The paint has been there early, should be even more open now.

10:34: Vaughn fouls out on a moving screen with 9:10 to play. The paint should be REALLY wide open now. Georgetown has no depth. Bulls MUST get to the rim now.

10:40: Vaughn is out, Monroe, Wright, and Clark have four, but USF leaving free throws out there. 53-41 Hoyas, Dojo missed two of his last four from stripe. No mistakes allowed if the run is coming.

10:42: Basket interference not called, Gilchrist gets to line. Makes one of two. That’s not enough right now.

10:53: Dojo to the rim and scores, timeout Bulls. Yes, it hurts not making shots, but the lack of stops is why we’re in this predicament.

10:54: Monroe drop step on Gilchrist, and one. I’ve gone from checking flights to first round NCAA sites to hoping for a backdoor cover in the span of 45 minutes. College basketball shouldn’t mean this much.

10:59: Touch typing through my tears right now. Sorry for any misspellings.

11:03: Rolling time out called. Greg Auman’s bald head seen walking away from press table with his laptop. When the Aumanator heads for the press room. It’s officially over.

11:04: Noriega with a three. That would have been useful two hours ago. Also allows me to make a reference to one of the great underrated rappers of all time. "Eh yo we light a candle, run laps around the English Channel…"

Well Bulls fans, it’s been a helluva season. But you can’t win at the highest levels of college basketball if you can’t make perimeter shots, and you have to be able to get crucial stops. We couldn’t do those things today. But from where we were at the beginning of Heath’s tenure, to where we are now, is absolutely night and day. The future looks very bright for the green and gold, and in the immortal words of Herm Edwards, "we can build on this!" But in this case, we actually can. The Muma Center, the emergence of Dominique, and a fan base that is much more aware that we play the sport of basketball are all great positives. A deep NIT run wouldn’t hurt either.

Voodoofive.com will be your headquarters for the One More Year Dojo Campaign 2010.

Thanks again for DoJoMojo for filling in for us. I only hope that drink ticket is a double.