Remember, the DoJo-Go-Pro-O-Meter is not interested in hearsay, rumors, or gossip... only fact.

Stan Heath had an interesting quote in an entry on Scott Carter's blog that warranted a change in the meter.

Heath clarified his stance on Jones’ future on Thursday via text message, saying:

"I don’t have any expectations on Jones returning to school,’’ Heath said. "Until all the information about the draft and his most accurate status within the draft is available – I will not have an expectation nor will I advise him on what I feel is best.’’

That made me wonder if Heath had had any players leave early for the NBA at Arkansas. (He wasn't at Kent State long enough for that to happen.) The only one that did so was Ronnie Brewer, who gave up his senior year to enter the NBA Draft. Jones and Brewer had similar production in their junior year, although Brewer's measurables were a little better. The Jazz took Brewer 14th overall in 2006, making him the last lottery pick. Brewer declared for the NBA Draft in late April that year, but didn't hire an agent right away. Heath's quote at the time was interesting.

"It probably is a very smart thing for him to do. He definitely wants to play in the NBA, he knows that's a big part of his future," Heath said. "The rule was specifically made for guys like him -- guys who really are considered in that realm of first-round draft pick, somewhere ... who knows? With that, Ronnie is going to make sure that he doesn't do anything to jeopardize his eligibility."

So it stands to reason that if Dominique Jones were to make a move up draft boards - say, if he goes off in the NIT and the Bulls end up winning the thing - Heath would recognize DoJo's opportunity and not stand in his way. Based on this, the DoJo-Go-Pro-O-Meter is being adjusted up to 40%. 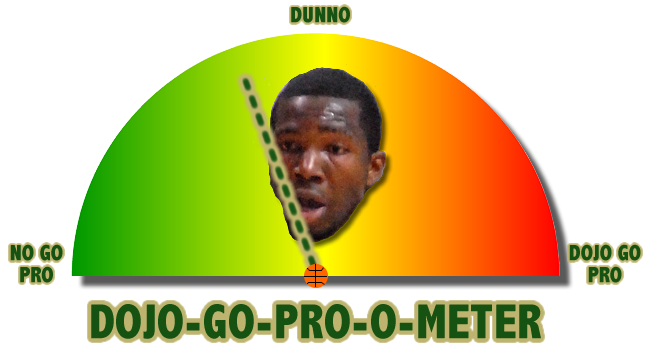