Well, today was a pretty revealing day as far as Dominique Jones's future plans are concerned. Actually it started last night, when Jones refused comment about the NBA Draft during a postgame interview. I happen to think that was a bad time to ask a question like that... even though I'm sure the media had to ask it anyway. It was the last game of the season, and everyone would be wondering. But emotions were obviously running very high with the way the game ended. Jones decided not to comment.

Then this morning came his Facebook status update, as reported by pretty much everyone:

"i should have kept it but i aint tripping…its time to make money now.’‘

To a lot of people this was over-interpreted to mean "He's definitely leaving." Well... no. I think the only thing that quote does solidify is that Jones very much wants to go to the NBA. But people seem to be taking a heat-of-the-moment statement and confusing it for a decision.

DoJo is a competitive, emotional player. For every "Y'all come watch Dominique Jones play!", there's a postgame plea where he wants more help from his teammates. The loss to N.C. State was especially painful not just because it ended the Bulls' season, but as he says in that status update, "I should have kept it." He gave the ball away 40 feet from the basket on the last play of the game, and everything went to crap.

Later in the day, Stan Heath (in an interview) and Jones (in a statement) basically said the same thing. Jones will probably submit his name for the draft, but won't hire an agent and will wait to see what the NBA scouts and GMs think. This is the first part of a process with several steps, and it doesn't automatically mean he's gone. DoJo hasn't done anything irrevocable yet. He didn't drunk-dial Stu Jackson at 4 in the morning and tell him, "HEY I'M DOMINIQUE JOOOOOOONNNNES AND I'M GOING PRO AAAAAAAAAAAHHHHHH (passes out)." Remember, Luke Harangody did this last year, when he was the Big East player of the year, and he ended up going back to Notre Dame.

The real tipping point seems to be what the NBA people think of Jones's pro potential. We have no idea what that truly is - there are a lot of mock drafts out there taking guesses, but for every mock draft that has him on the border of round one, there are others who barely have him in the draft at all. And besides, what the mock drafters say isn't important. It's what the NBA people say.

To me, this is a clear-cut case of "we don't know what will happen." So the only logical place to set the DoJo-Go-Pro-O-Meter is at 50%. But I'm setting it to 51% simply because no one can doubt that deep down, Jones wants to go to the NBA. That has to count for something. 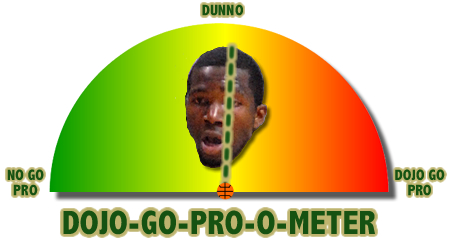