A Look Through the Gilman Gear Catalog

Share All sharing options for: A Look Through the Gilman Gear Catalog

Buried pretty deep in Greg Auman's blog coverage of USF spring practice were a couple of new toys Skip Holtz has out there on the field during practice drills. They were both from this place called Gilman Gear, and as someone who loves rifling through the Sky Mall catalog on airplanes looking for the dumbest things money can buy, I couldn't resist taking a look. 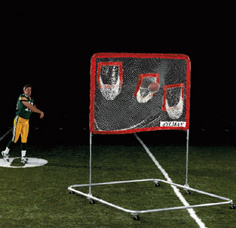 One of Skip's new toys is something called a High Release Net, which is supposed to help quarterbacks work on releasing the ball at the highest point and getting it over the outstretched hands of a zone linebacker. You can also work on pinpoint accuracy by putting little pockets on the net. It's basically an adjustable screen with pockets on wheels, and somehow this costs $750. The profit margin on these things must be unbelievable.

They also have Lineman Arches. These are about four and a half feet tall and they're designed to teach linemen to keep their pad levels down to try and get the edge at the line of scrimmage. Each one of these sets you back $225, as every handyman and do-it-yourselfer in America looks at it and thinks they could get that done for about $50.

Those look like the only gadgets that USF picked up. Oh, but there's more. So much more. 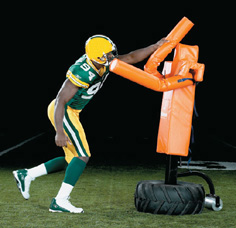 This thing is called a Sackmaster. The arms bend out like an offensive lineman in a pass-blocking stance, and the torso and shoulders can be twisted around like a real person. The arms flex back into position, so you have to push them out of the way to make your pass-rushing move. Cost: $995. 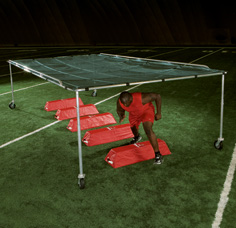 Now we're getting into the potentially unnecessary. The Super Chute is a 20' long net to help players stay low during running and agility drills, like they would if they were a ballcarrier. The net adjusts to heights between 42" and 66", at which point it's basically useless. And they want $1,675 for this thing. (That's a comma, not a decimal.)

Other Potential Uses: Something to hide when your athletic director asks what happened to the equipment budget, obstacle on Battle of the Network Stars. 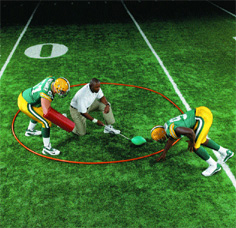 It's a Stringball. It's a ball on a string. It sells for $26. The copy actually says, "use it for get-offs." I really don't think I need to know. Hoop not included.

Other Potential Uses: I SAID I DON'T THINK I NEED TO KNOW. 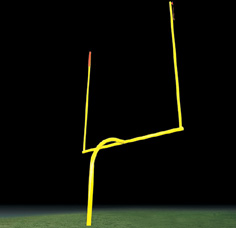 And finally, just to confirm that goal posts are expensive and not something you should let drunken students rip down after every so-called big win... Gilman Gear sells those too. If you want them painted yellow with the NFL-standard 30-foot uprights, it costs you a cool $6,550. But the Gilman Gear people, they know you're a sharp consumer and you're worried about cost. So they know how to close the deal.

Comes with Set of Streamers!

Other Potential Uses: A constant reminder that you should have just spent the extra $2,000 for the hinged goal posts when your students, fresh off ten straight hours of drinking at their tailgates, drinking beer inside the stadium, and drinking their smuggled flasks and Ziploc bags filled with Jack in the stands, storm the field to tear these down and carry them out of the stadium after you beat a team you are actually superior to.