Share All sharing options for: Eriksen Wins 600th, And Isn't Stopping There 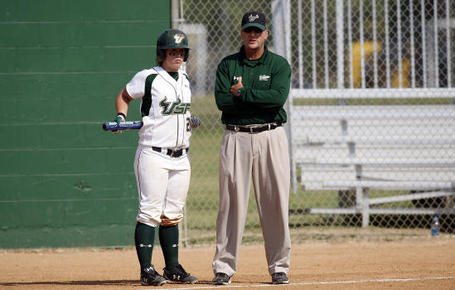 Because most of our eyes are rightfully tuned into one of the best NCAA Tournaments in memory, something might have slipped under your green and gold radar last week.  Ken Eriksen picked up his 600th win as head coach of Bulls Softball on Saturday.  Winning at anything 600 times is impressive enough, but to do it as head coach of a softball team with arguably the worst facility in the region, if not America, is just short of a miracle.

The respect Eriksen gets from his softball peers is clear, as he continues to serve as an assistant coach for USA Softball, helping the US to win a World Championship and an Olympic Gold Medal.  I don't know Ken well, but have always been blown away how his players, coaches, former players, and everyone around USF Athletics has only has great things to say about him.  You would be hard pressed to find anyone that is more beloved and respected in the athletics building.

Eriksen started as a baseball player at USF under Robin Roberts, finishing as a .315 hitter and playing five different positions for the Bulls.  After a playing career in both slow and fast pitch, including a Pan Am Games silver medal, he returned to his alma mater as an assistant coach, taking over the program as head coach in 1997.  Despite playing on a field many high schools teams wouldn't be impressed by (though thank goodness that changes next year), He has won three conference championships, has taken his team to the NCAA Tournament eight times in 13 seasons, advancing to one Super Regional in 2006, and was a screamer down the third base line in Game 1 against UCLA from really scaring the hell out of the 11-time National Champions.  And it's not just on the field success, as his teams are also always amongst the USF leaders in team GPA and APR, and have picked up more academic awards than could be listed here.

If you've ever watched women's collegiate softball, two things usually stick out; how a quality pitcher can basically single-handedly carry a team, and that damn singing and chanting coming from the dugouts.  The Bulls don't do that.  They get up and celebrate good plays, and they yell encouragement to their teammates, but they don't act like they're trying out to be extras on Glee.  They're there to play the game with passion and as well as they can.  But they are also incredibly emotionally stable.  I sat behind the dugout for the final game of the '06 Gainesville Regional the Bulls won to advance to play UCLA.  I think I was more excited than the team after it was over.  This group had just accomplished more than any team in school history, no small feat mind you, and acted like it was just another day at the office.  Their focus on the task at hand and ability to stay in the moment was startling.  That comes from great leadership, and that's what Eriksen brings to the table every day.

Kenny is also legitimately, laugh out loud funny.  Doug Woolard holds monthly staff meetings, and asks each head coach to give an update on their team.  When it's time for the softball report, all Eriksen is missing is a stool, microphone, and a brick wall behind him, as he is by far the funniest coach we've ever had.  Anyone that's seen him at an Around the Horns event or in any other public function can attest that there is no one better on their feet.  His weekly show on GoUSFBulls.com is good not only for the team updates, but the way they're delivered with razor sharp timing and delivery.

He has also had multiple chances to pack up and coach somewhere else, but has chosen to stay home, partially because of the promise that eventually his team will get a facility worthy of a perennial NCAA competitor.  It looks like finally his dream is coming true, and he'll be able to bring recruits to an actual building instead of showing them a drawing.  It will be tough for any recruit, especially a pitcher, to turn down the ability to play in a brand new facility for a head coach that has also been a teacher to Lisa Fernandez, Jennie Finch, and Cat Osterman.  The future for USF Softball looks bright indeed, and much of that is thanks to one man.

Hopefully someday, that field will have his name on it.  But until then, The Hawk will keep them laughing... and winning.