It's been a pretty busy opening week for Coach Holtz as he finally gets to see what he has in this football team. One of the big questions that most Bulls fans were asking about, was the heath of starting QB B.J. Daniels after he went under the knife this offseason to repair a partially torn rotator cuff in his left arm. Although he has been held out of contact drills, B.J. looks like he hasn't missed a beat. One big difference for Daniels though is the red no contact jersey that he has donned this spring compared to the gold caution jersey that he wore last season. 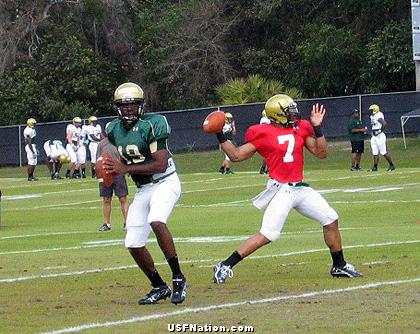 Keep an eye on how the walk-on quarterbacks do as well this spring. With Daniels and incoming freshman Jamius Gunsby as the only quarterbacks on scholarship this year, there will be a nice QB competition between walk-ons Ryan Eppes, Eric Johnson (Number 19 above), and Glenn Fagan for 3rd on the depth chart next season.

Another big question that we had this spring is who would step up to replace 7 starters on defense. David Bedford had a great opportunity to grab one of the openings at defensive end, but he was held out of the first two practices this spring along with RB Jamar Taylor so they could focus on getting their academics in order (Taylor will be held out of Spring Practice all together). After returning to the team, Bedford has been working with the 4th string defensive line. Although Bedford will most likely move up the depth charts, this is not the way you start out when dealing with an entirely new coaching staff.

While Bedford stumbled out of the gate, Ryne Giddins looks like he has taken advantage of the opportunity, and as Voodoo 5 talked about yesterday, the man has set some serious expectations for himself next season. While he has been running with the first team defense to start out the Spring, we really won't know exactly where he will be at until after the depth charts are released following a scrimmage on Saturday. DE should be a battle that should last all the way until the start of next season as Marshall, Bedford, Giddins, JuJu Forte, and Claude Davis all aim for the two starting spots.

Its great to see Maikon Bonani back on the field after his horrific fall at Busch Gardens last summer. Just the fact that Maikon is back on the field so quickly is amazing. I'm interested to see who Holtz pegs to be the kicker next season between Bonani and last year's starter Eric Schwartz.

One of my favorite things to look at is the yearly list of walk-ons, and to see if any of these guys make the fall roster. USF has had some great walk-ons start in the past, such as RB Ben Williams, and we had three former walk-ons in Mistral Raymond, Chaz Hine, and Jake Sims start for the Bulls this season. We've already gone through the two new quarterbacks, but there are some other interesting names out there, starting with DB and Name of the Year candidate Thanasi Mihalakos out of Terry Parker HS in Jacksonville. Another name you should keep an eye out for is 6'4 WR Corey Jackson from Lyman HS. The Bulls need a big receiver after Carlton Mitchell left, and if Jackson can impress the coaches he might be another steal for the Bulls.

If there is one thing you should be following, its the Senior Perspective series that the Athletic Department has started. Mo Plancher and Sabbath Joseph have already done one, and you can find the series on UStream here.

That pretty much rounds it up. If you have any questions or comments, leave them below or save them for the Open House Chat the V5 staff will have on Thursday during the NCAA Tournament.