Share All sharing options for: Today's News in Picture Form

Sometimes it's easier to show you the news instead of just writing it. 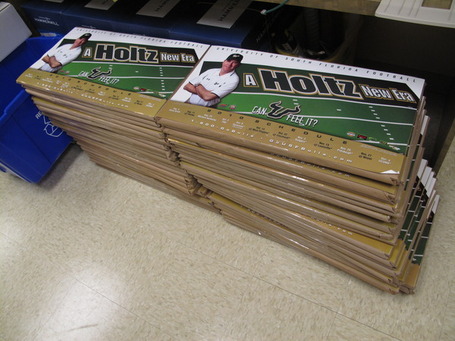 Show up this Saturday at 6:00pm at Raymond James Stadium and you can be the proud owner of one of these 2010 football posters. Also there's a spring game that night, so I guess you can stick around for that if you're into that kind of thing.

(Note to Keeley - you're not the only one who's a little beaten down by this year's slogan.)

Earlier tonight, Skip Holtz announced that the #1 offense will match up against the #1 defense. I think it's a good idea to have the starting units play each other because otherwise, whatever they accomplished during this game would be easily dismissed with "yeah, but they did it against the backups." Especially since Holtz is new, it's best for him to know what the strengths and weaknesses are going to be so that they can spend five months trying to accent them, fix them, or cover them up. It would be dumb to put on a meaningless show for the fans and then have no idea what to expect when fall practice gets started.

The spring game will be on ESPN 3 (formerly ESPN360) both live and archived on the Internet, which is a godsend for out-of-town fans like me, and for people who either can't make it or who can't watch it on TV. Expect borderline excessive coverage this weekend now that all three of us can watch. (L-I-V-E-B-L-O-G) 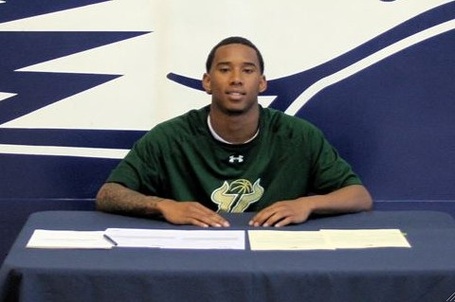 Here we see Shedrick "Showtime" Haynes about to sign his letter of intent and officially commit to USF. (The picture comes from Greg Auman via Lackawanna College.) He and Hugh Robertson both made it official today, unlike Jawanza Poland (see FanShot below), who is still wavering quite a bit. It seems like it's coming down to playing time, because in his remarks to Auman, Poland said that the signing of Robertson was playing into his decision. I don't get that at all - USF needs two wing players after Mike Mercer graduated and Dominique Jones left. And only four rotation guys return next year, none of whom play his position. There's going to be loads of playing time at the 2 and 3. Hopefully Stan Heath or someone gets this point across to him. 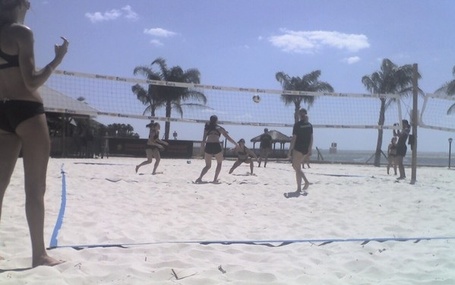 Toro Grande is the volleyball aficionado around here, and not to go all Sports By Brooks on you all, but I couldn't resist this picture of the team practicing for Fiesta on Siesta Key this weekend. (I guess this is volleyball's version of a spring game. Florida is awesome.) That starts at 10:00am on Saturday, if you can't make it to Tampa or if you just want to see 20 college volleyball teams playing on the beaches.