(Author's note: When I refer to "Scenario 1A" or "Scenario 1C", check the previous post to see what they are.)

SCENARIO #2A: The Big 10 takes Notre Dame or one BIG EAST team, plus Nebraska and Missouri, and expands to 14. No one else takes the bait and expands past 12 teams.

This is the only 14-team scenario where USF is not seriously impacted. The BIG EAST would basically stay intact. Refer back to Scenario 1A or Scenario 1C for what happens next.

SCENARIO #2B: The Big 10 takes Notre Dame, or some other school, plus up to two BIG EAST schools and expands to 14. No one else takes the bait and expands past 12 teams.

The BIG EAST probably holds on to its BCS designation by its fingernails as it adds two teams from Scenario 1C, plus a third all-sports team or a basketball-only team from Scenario 1A if Notre Dame leaves too.

But what happens if everyone else goes to 14?

If three or more all-sports BIG EAST members leave and no one goes past 14 teams, we think USF is well and truly fucked. And we're not just throwing that word around. It would be an epic fail of the highest order. Once it gets down to five teams, it's all over. The BIG EAST wouldn't have enough left in football to lay any claim to being a BCS-worthy conference, or even a viable football league.

Let's go through the 14-team expansions. We'll start with the SEC, since they can be the most selective. The only school out there that could realistically interest the SEC is Texas. UT has everything you could ask for as a conference - access to a new state, several major media markets (in addition to Austin, there are huge concentrations of Longhorn fans in Houston, San Antonio, and Dallas/Fort Worth), a top-notch academic institution, and an athletic department with a gigantic stadium, raging success in just about every sport, and a TON of money.

Why would Texas leave? Because it's the SEC. Because the only reliable football competition they have in the Big XII is with Oklahoma, who they were going to play every year anyway. Because the Big XII's television contract is absolutely terrible. (It's so bad that some teams have to broadcast non-conference home games on pay-per-view.) And because their in-state rivals have a long and cherished history of trying to rat each other out to the NCAA for any misdeed, making this a chance to get away from it all.

Texas needs a running buddy, so let's add Texas A&M, which has about 90% of what Texas has as far as money, facilities, and fan base goes, plus they have a sitting governor/president-for-life in Rick Perry* to help their cause. The only difference between Texas and Texas A&M is consistent football success. Well, and this:

* - I live in Texas. I am allowed to make fun of Rick Perry's quest to remain governor of Texas until the end of time.

So now the Big XII needs at least two teams. I figure they would take TCU and right a wrong committed 15 years ago when Texas legislators wheeled and dealed to get Baylor and Texas Tech into the Big XII instead of the Frogs. Then it's a race to see who can lay claim to Utah between the Big XII and PAC-10. The PAC-10 is already interested in them, and if the PAC-10 wins, the Big XII might claim Louisville. There aren't any other good options available. They have a strong athletic department and it's the only BCS school left that is still somewhat of a geographic fit.

There's a chance the Big XII needs up to two more teams, if the Big 10 takes Nebraska or Missouri away from them. They would have to swallow hard and take Cincinnati if they just took Louisville, and then who knows what they do for a 14th team if they need it. Do they rescue West Virginia or Pittsburgh? Or do they promote a team like Colorado State or Houston or Memphis? It's hard to say. Regardless, I don't think a Florida team would be in the discussion because they're too far away.

The PAC-10 gets Utah as team #11, then they would add Boise State, BYU (because they have no choice at this point, political misgivings be damned), and some other western team (Air Force? UNLV? Hawaii? Fresno State?) to get to 14.

Now the biggie. The ACC needs two teams. But don't get your hopes up. There would be 5-7 BIG EAST teams jockeying for two spots. For the sake of this scenario, let's say the Big 10 takes Syracuse and Rutgers along with Notre Dame. Louisville has been claimed already, so the five BIG EAST teams left would be Pittsburgh, UConn, West Virginia, Cincinnati, and USF. This is a guess and the teams could change, but let's say that Pittsburgh and West Virginia go to the ACC together because of their all-sports success and their 100+ year rivalry, plus their residual rivalries with their former BIG EAST mates like Miami and Virginia Tech.

That leaves three former BIG EAST teams out in the cold - UConn, Cincinnati, and USF. (If there are more BIG EAST teams left behind, they suffer the same fate I'm about to describe.) Through some terrible set of circumstances, we are all sent hurtling down the slippery slope of non-BCS doom... and right into the waiting arms of: 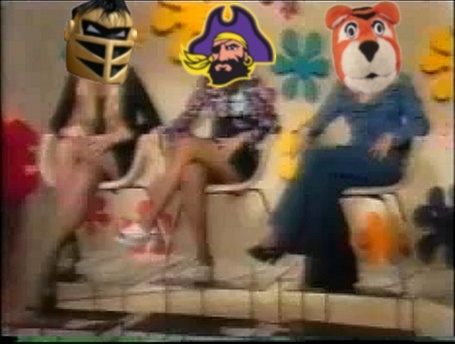 That's right, it's all three of our mildly unappealing candidates from Scenario 1C. So far this sounds like a total nightmare, doesn't it? Oh, but that's only six teams. We're going to need some more to have a football league. 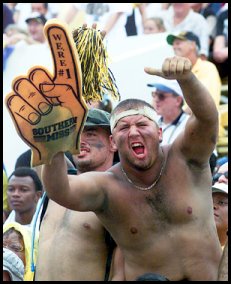 OH GOD NO KILL IT WITH FIRE. At this point I don't care how many more teams join. The tipping point has been reached for us.

Here's the big problem. What do UCF, East Carolina, Memphis, and Southern Miss fans all have in common? Answer: They absolutely hate USF. (Especially UCF and Southern Miss, who didn't need a reason to hate us in the first place.) It's pure jealousy and irrational hatred, born from the day USF left Conference USA for the BIG EAST. None of these new/old rivalries would be healthy or enjoyable in any way. We would be laughed at by all of them as the team who tried to fly away, only to get rejected and have to come slinking back with our tail between our legs. If USF has to rejoin them in some future league, it will be an absolute living hell.

Remember how you felt after Voodoo 5? Now imagine that misery stretched out indefinitely. Yes, it's that bad.

We haven't even gotten into the money ramifications yet. The TV contract would be peanuts compared to what USF has now. There would be fewer NCAA tournament shares to go around. The fan base would be totally defeated - season ticket sales would go down, and selling out football games would become nearly impossible. You could forget about an on-campus football stadium. Skip Holtz would probably (wisely) take the first BCS job he could get, and there wouldn't be nearly enough money to hire a proven replacement. Recruiting would go in the tank. Basically we would take the last 10 years of progress in USF athletics and unwind the whole damn thing, with not much hope of ever getting back to the point we're at right now.

So yeah, there's nothing on the line here.