Share All sharing options for: Comparing the Big 10 and Pac-10 Expansion Process to Characters From "Spaceballs"

(Hopefully you know what Spaceballs is before getting started here. If not, I suggest IMDb.)

I started comparing conference expansion to the movie Spaceballs when I said that everyone expanding to 16 teams would be "going to plaid." Then I said the Pac-10 presidents authorizing expansion was like Dark Helmet saying they would have to go to ludicrous speed when they were trying to catch Lone Starr. Now that it's all happening, we just took off for ludicrous speed, and who knows if we'll all end up crashing headlong into the dashboard and needing a five-minute break, or what.

Then I thought, let's take this to the nerdy extreme and figure out who would be who if everyone in Spaceballs was a figure in the college expansion land grab. This is as many as I could think of, but feel free to add some more in the comments. And remember: You're looking at now, sir. Everything that happens now, is happening now.

- Princess Vespa - Notre Dame. Everyone wants her, but she doesn't know if she wants anyone. Also, recently got a huge nose job.

- Lone Starr - Jim Delany. On an endless quest for money (and TV markets), but can he rescue Princess Vespa and pull in the biggest cash haul out there?

- Barf - Joe Paterno. Barf's tail had a mind of its own; Paterno can't stop thinking out loud about any of this. Plus he kind of looks like a bulldog on its hind legs. 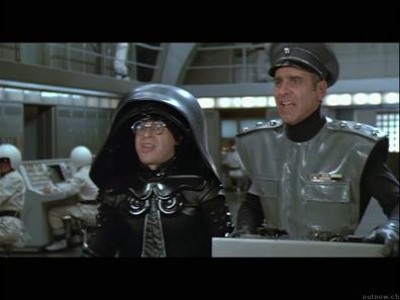 - Dark Helmet - Larry Scott. Not a perfect fit because they're not after Notre Dame here, but he's the one who called for ludicrous speed, so it has to be him.

- Colonel Sandurz - Texas A&M. Constantly trying to reason with Dark Helmet, who calls him chicken and a petty excuse for an officer before he finally falls in line.

- Pizza the Hutt - Missouri. Comes right out and asks Lone Starr for the money, but instead ends up eating itself to death.

- President Skroob - Dan Beebe. Tries to act like he's totally in command, but doesn't have a clue and ends up getting shot off to God knows where.

- Prince Valium - Dick Ebersol/NBC. Boring as hell, no one's interested in him, but Princess Vespa is going to be stuck with him because her dad is calling the shots.

- King Roland - Jack Swarbrick. His only goal is providing the best for his daughter, unless someone is able to prove that they are better. Maybe Delany will break up the Ebersol-Notre Dame re-do wedding by announcing he's a prince. 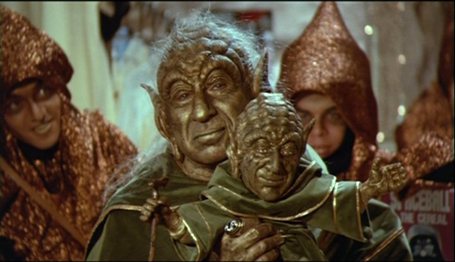 - Yogurt - Craig Thompson. Very wise and has important things to say that everyone should listen to. May also be good at merchandising. Unlike the movie, though, no one cares what he is saying.

- Major Asshole - Texas. Can't even leave the Big 12 gracefully, without trying to win the blame game.

- Megamaid - ESPN. The tool with which everyone will try and suck up all the fresh cash from the planet Druidia. Can also apply to the BCS. I'm not picky here.

- The alien that pops out of the guy in the diner - Baylor boosters. They made a lot of nasty snarling noises and scared everyone for a minute, but it just ended up being a big song and dance routine before they left.

- The guy on Spaceball One who gets a laser to the groin - Iowa State. Punished for no good reason by Dark Helmet. Never had a chance. 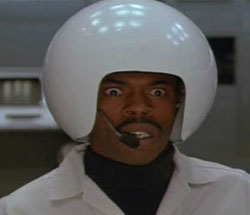 - Charlene and Marlene (the "doublemint twins") - Kansas and Kansas State. Hung around President Skroob too long, ended up nowhere.

- The one million spacebucks - Nebraska. Not the biggest prize for Lone Starr, but hey, if he can't have Princess Vespa, at least he has the money.

- The ape-people - Every non-BCS school watching this happen from afar. "Oh shit. There goes the planet."