Before we get to our "15 For 15" Honorable Mention list, here's how we came up with our ranking of the top 15 football players in USF history.

All three of us filled out our ballots from 1 to 15, and we each listed some other players that we considered but decided not to include. The #1 player on each list was given 15 points. #2 was given 14 points, #3 was given 13, and so on down to the #15 player, who received one point. We then added the scores together and ranked everyone who appeared on a ballot. As we go through the top 15, we'll list how many points they received.

Trae Williams, CB/2004-07 (3 points) - Williams played opposite Mike Jenkins, and towards the end of his career he started getting more action because teams were quite simply afraid to try and throw to whoever Jenkins was defending. Williams took advantage with 16 career interceptions, second-most in USF history. He tied a school record with seven INTs during his junior year, and he holds the school record with four career interceptions returned for a touchdown, including three in a row in 2007.

Derrick Sarosi, OT/2001-04 (1 point) - Sarosi started all 44 games during his four years at USF, across the wide-open spread of Marquel Blackwell to the run-heavy Andre Hall era. He moved from right tackle to left tackle after his freshman year without missing a beat, and was named All-Conference USA third team both years the Bulls were in that league. You might remember this picture from the Tampa Tribune after the Bulls beat Pittsburgh in 2001 - that's Sarosi. 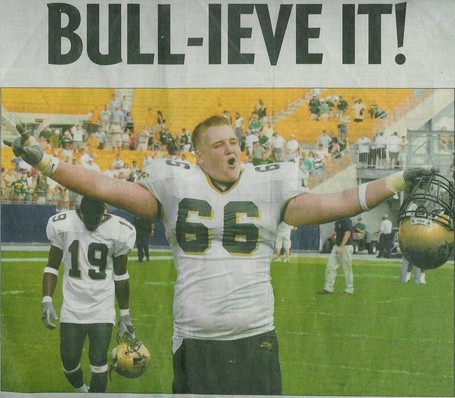 Shurron Pierson, DE/2001-02 (1 point) - Pierson made quite an impact in his two years in a Bulls uniform, recording 10 sacks in 2001 and 18 overall, both of which were school records until George Selvie came along. He had four sacks against Southern Miss in 2002, which is still tied for the school record. Pierson was really the first defensive lineman USF ever had who you could consider unblockable, and even though he ended up making a regrettable decision to leave early for the NFL (his pro career fizzled quickly), he was still a force.

Clif Dell, WR/1997-98 - The 149 receiving yards Dell racked up in USF's first-ever game is still a school record. He was the Bulls' first home-run hitter at receiver, scoring four touchdowns of 50 yards or longer, including two 75-yarders. Dell also averaged over 23 yards per reception in 1998. After his college career ended, Dell became a top receiver for the Orlando Predators in the Arena league.

Jason Pierre-Paul, DE/2009 - Most of you know Pierre-Paul's story and accomplishments. I won't go through the whole thing again, but if you're wondering why he isn't on the list, it's because he was only at USF for one year. Longevity counts.

Taurus Johnson, WR/2005-08 - Johnson never led USF in receiving in a season during his career, but he had a knack for making big plays that made him Matt Grothe's favorite receiver whenever he really needed a completion. He currently ranks third in Bulls history in career receptions (112), fourth in yardage (1434), and second in touchdowns (12).

Terrence Royal, DE/2002-05 - Royal is really the forgotten defensive end that filled the gap between Shurron Pierson and the George Selvie/Jason Pierre-Paul tandem. All he did was start 32 games and register 19.5 sacks, including a fantastic 2005 season where he picked up 10 sacks, forced 4 fumbles, recovered three, intercepted a pass, and scored a touchdown. Royal is now a fullback/linebacker for the Tampa Bay Storm in the Arena league.

Carlton Mitchell, WR/2007-09 - Mitchell headed to the NFL after Jim Leavitt was left go, leaving as the all-time leader in receiving yardage in USF history. We covered his backstory extensively when we profiled him for the draft, so I would refer you back there for his bio. And if you want to follow him on Twitter as he heads to training camp with the Cleveland Browns, here's where you can do that.

Bill Gramatica, K/1998-2000 - The middle child in the demonstrative Gramatica kicking family (between Martin and Santiago), Bill made 36 field goals during his USF career, including a record 63-yarder in the last game of the 2000 season. He ranks second to his brother Santiago in career field goals (Santiago had 38), but Bill got the nod since he accomplished it in only 2 1/2 seasons. I might be misremembering this part, but I think the left-footed Gramatica briefly attempted to kick right-footed after pulling his groin muscle in 1999, an injury that ended his season.

Tony Umholtz, P/1997-99 - The first USF player ever named to an AP All-American first team wasn't Marquel Blackwell, or Andre Hall, or George Selvie. No, it was Umholtz, who was named a I-AA All-American in 1999. Sure, Brandon Baker arguably has better stats, but you had to see Umholtz's punts - they were moon shots that were hardly ever returned. (In 1998, he had a 40.1 punting average and a 39.3 net average. It's nearly impossible to do that.) Not only that, but when Bill Gramatica hurt himself in 1999, Umholtz stepped in and added kicking to his repertoire, making four field goals and 20 extra points.