The Most Important Player for USF Basketball - Number 6

Share All sharing options for: The Most Important Player for USF Basketball - Number 6

Ed note: For the countdown so far and the articles for each of the players, click here.

As the players are named, and the numbers get smaller, it takes a lot more thought figuring out who will be the next player on the list. I had a lot of trouble between this one and number 5. I really wanted to put this guy higher, but in the end I couldn't pull the trigger. So the 6th Most Important Player for USF Basketball this season is Augustus Gilchrist! 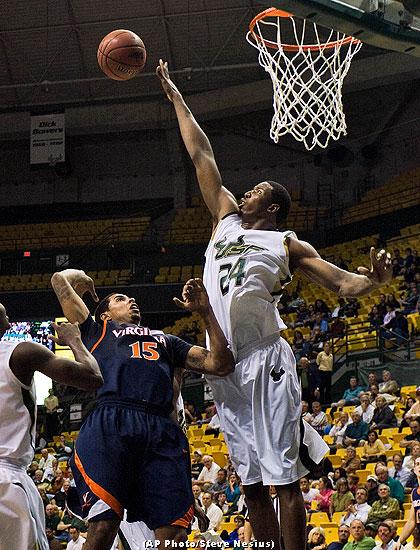 Playing in 18 games, Gus was 2nd on the team with 13.1 points to go along with 5.9 rebounds a game. Statistically he was the best 3-point shooter on the team going 47 percent from deep. He held his own down low in the post when he had to, and he almost averaged a block a game.

Gus was primed to have a breakout sophomore season with the Bulls after a freshman season where something didn't seem right with him. Some just chalked it up to not being in real game shape after not playing a competitive game for a year and a half. After going through the offseason conditioning program, and still feeling sluggish the trainers ran through a battery of tests to see what was wrong. After finding out that Gilchrist was anemic, they quickly gave him an iron supplement and Gus was a completely different person.

I think most people forget that Gus led the team in scoring before his injury, and he was shooting an insane 80% from three before he went down. Jones and Gus had some chemistry on offense, and it seemed like we had a legitimate 1-2 scoring threat for the first time in ages. Though as soon as Gus went down, Jones put the team on his shoulders and we went on that crazy ride this season.

So what should we expect out of Gus next year? I expect him to lead the team. It's insane to think that he will have the most experience on the squad, but with players leaving early for one reason or another, Gus is the guy now. The team will need a leader now that their 3 most experienced players in Mike Mercer, Chris Howard, and Jones are gone and someone needs to step up. Might as well be Gus.

So who should be Number 5 on TMIPFUSFB Countdown? The answers as always are below.