Where I Come From: My Favorite Moment

Share All sharing options for: Where I Come From: My Favorite Moment

This post is sponsored by EA Sports NCAA Football 11.

There are a lot of big moments in USF football history, the kind that make you jump up and scream and high-five everyone within a 50-foot radius. This may not be one you remember, because odds are you didn't get to see it, not even on TV. But I did. In the process, we saw the first big game from one of the greatest players in Bulls history.

The Bulls traveled to TCU on September 25, 2004. The year before, the Horned Frogs had ended USF's long home-field winning streak with a 13-10 win, a game where Gary Patterson basically destroyed Ronnie Banks's career with constant pressure. He was sacked, I think it was nine times, and hurried countless others. It got so bad that Brian Fisher had to be pressed into duty at QB, and he pulled off a ridiculous touchdown pass to Elgin Hicks to give the Bulls a shot.

When you think of TCU football in the last decade or so, you think of their defense. But in 2004 the Frogs' defense was shambolic. The week before the USF game, they went out to Lubbock to play Texas Tech. After TCU raced out to an early 21-0 lead, the Red Raiders collected themselves and scored 70 points in roughly two quarters' worth of game time. I remember leaving my apartment to go out for a day of mild debauchery after watching the first quarter and being quite concerned with how the next game would turn out. When I found out Tech had won 70-35, I started rubbing my hands together. This was going to be good.

Anyway, this was the payback game, and as it turned out, TCU had a long home-field winning streak of its own that would not survive the night. To get there, the Bulls had to survive the wildest game they've ever played. You probably missed it because at the time, Hurricane Jeanne was approaching Florida from the Atlantic. Hardly any Bulls fans made the trip, and the ones that did either lived there already, like me, or they were willing to risk their property for a not-really-important football game between two teams leaving the conference at the end of the year to head in different directions, and maybe never play each other again. (EXTREME FANDOM.)

Instead of relying on Pat Julmiste and the shaky passing game like Texas Tech had the week before, USF ripped into the Frogs' soft defense with some guy named Andre Hall. This was his coming-out party.

He ran for 119 yards and three touchdowns, and caught passes for another 65 yards and a fourth TD. Sure, Julmiste threw for 324 yards, and it was easily the best game he ever played because, again, TCU's defense was a train wreck. But this was the Andre Hall show. It was the first time we saw what would become his hallmarks as a runner - his vision, his balance, and his ability to make guys miss at the second and third levels.

TCU held a 24-17 lead with about ten minutes left, and that's when the game completely jumped the tracks. First, USF committed THREE personal fouls in one defensive series to keep a long, clock-eating Frogs drive going. (The Bulls finished with an ungodly 18 penalties for 164 yards, both of which are still school records.) TCU lined up to try a field goal that would have iced the game, but it was blocked by Jon Simmons. This was the last defensive stop of the game. The Bulls worked their way downfield and tied it at 24 on a fourth-down pass from Julmiste, who faked a sweep to Hall, rolled right and then threw back left to Hall in the end zone. The Frogs needed exactly two plays to get the lead back, 31-24, but the Bulls rallied again, with Julmiste finding Joe Bain for a huge 53-yard pass and Clenton Crossley punching it in with 1:21 left. After getting stuck with bad field position on the ensuing kickoff, TCU tried moving the ball but eventually decided to run out the clock and go to overtime.

There were so few USF fans there that the numbers on our tickets were pointless, and by now everyone was either in the front two rows or leaning against the railing right next to the field, all waiting with rapt anticipation. The action came down to our end of the field for overtime. TCU scored easily on their first possession, but the Bulls answered to tie it at 38 and move to a second OT. At this point, I figured that the teams would switch ends of the field for the next overtime, so I took off into the tunnel, raced beneath the stadium, and came out around where I thought the 25-yard line was. But there were two problems. First, I had come up right in the middle of the TCU student section. And second, the teams had in fact not switched ends. (Also in my haste, I caught my cargo shorts on a railing and tore a pocket wide open.) The students taunted me in that typical haughty stuck-up private school way, and I rushed back down to the other end just in time for the game to start again.

Surprise, surprise, Hall scored another touchdown to give USF a 45-38 lead, clearing out Frog defenders like they were bowling pins. Then it looked like the Bulls might finally get a stop and win the game. It was 4th and 1 at the 16 and TCU took their one timeout. The few, the proud, USF fans spent the entire break begging and pleading and bargaining with all kinds of real and false gods to let the defense shut it down right here. Instead, Brandon Hassell took off on a bootleg and ran all the way into the end zone. We all groaned and tried to mentally prepare for overtime #3.

That wouldn't be necessary.

On the extra point, TCU dribbled the snap back and the holder, Reeves Dalton, couldn't get the ball down. Dalton tried running to his left but was met with a swarm of Bulls as he threw an illegal forward pass. Game over. Bulls win 45-44. 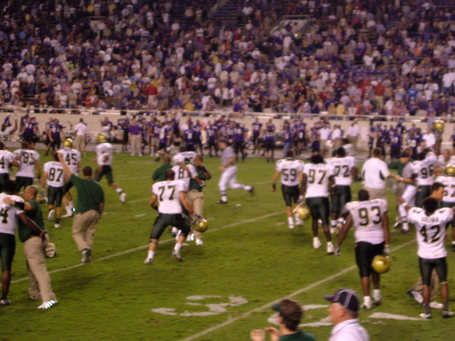 Pandemonium broke loose. Players went running in all directions. (One of them took a chunk of sod out of the field to take home as a souvenir. TCU complained about this even though the field was in terrible shape to begin with.) The stadium went deathly quiet. And we all went berserk. I'm surprised we didn't do one of those pigpiles like when a baseball team wins the pennant. We were absolutely delirious. The players lined up to high-five everyone at the railing. Leavitt ran around hugging anyone he could find. I was so amped up that I actually taunted a bitter 10-year-old kid wearing purple about HA HA CHECK THE SCOREBOARD YOUR TEAM LOST HA HA HA. I didn't care.

Later, we found out that no one had seen the second overtime back in Florida. The game had taken so long that the late local news started, and Channel 28 decided to break away to cover the hurricane. The only USF fans who saw the dramatic finish were those of us in the stands. The game had to be re-run a few days later so everyone could see the whole thing, and even then it was only on Bright House cable so a lot of people still didn't see the ending.

Fortunately my parents had Bright House, and I asked them to send me a copy of the game, which they did. But I didn't need it. I was there.