Friday Five Plus One Keys - USF at Florida

Share All sharing options for: Friday Five Plus One Keys - USF at Florida

posted by Voodoo 5 1 day ago

posted by Ken DeCelles 1 day ago

I'm writing this in the Beef O'Brady's on the USF campus, on a Friday afternoon, and there are actually people in here (besides me, Toro, and a cavalcade of Toro's friends coming and going before heading out of town). I would have basically killed to have this on campus 10 years ago when I was a student. And back then the campus totally emptied out around 11:00am on Friday mornings. But instead of being bitter or envious, I'm kind of pleased. This is finally a real live college campus, and it doesn't take the Bulls playing the Gators in football to make it feel like one.

But USF is indeed playing the Gators tomorrow, and here are the keys to what would admittedly be an unlikely win. We couldn't settle on just five, so here are your Friday Five Plus One Keys.

1. Do. Not. Give. The. Ball. Away. No dumb interceptions. No muffing punts or kicks. No reckless plays (this would be a bad week to work in an option package and start fumbling the ball around). The Bulls cannot win if they don't win the turnover battle like they did last year against Florida State.

3. Own the red zone. When you get there (and it may not be often), score touchdowns. When the Gators get there, hold them to field goals. Of course holding them to nothing would be preferable, but I wouldn't count on Caleb Sturgis missing a lot of kicks.

4. Keep the Gators offense out of rhythm. Change your line calls, your spies, your coverages constantly. Even taking away all the botched snaps the Gators had last week, they were seriously out of sync for three quarters against what is probably a dismal Miami University team. Force them into predictable situations -- 2nd and 12, 3rd and 10, whatever.

As Rick Neuheisel once said, "Punting is winning." Well, them punting anyway.

5. Take chances, but not stupid chances. By stupid chances I mean blitzing the house, or surprise onside kicks, or anything that can seriously backfire. This isn't the week to fake a punt on your own 15-yard line. However, it might be the week to go for it repeatedly on 4th and short, or break out that trick play you've been working on. (I am deeply opposed to trick plays but this would be the time to use one.) 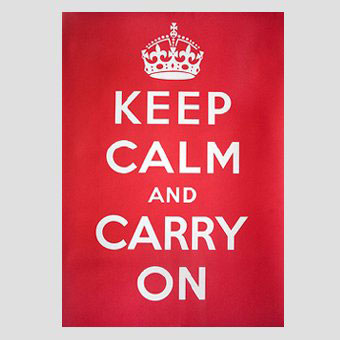 Maybe you've seen someone with this sign in your office to keep them from going berserk when things go wrong at work. Same thing applies here. Something is going to go wrong in this game. There could be a big play, or a killer penalty, or a special teams snafu. When it does, GET OVER IT. You can't keep thinking about it and then end up making more mistakes. Florida can get away with a sloppy game and still win. The Bulls can't.