After watching the game again, I realized this wasn't going to be a good game to do any deep examination. Stony Brook was so outmatched that many of the things I saw on Saturday are unlikely to be repeated, because this is the weakest team on the schedule (and probably by a wide margin). Once I saw Marcus Shaw's touchdown run, where the right defensive tackle broke into the backfield behind the vacated pulling guard and actually stood there watching Shaw run away from him, I knew this wasn't going to be of too much value. Against some other teams, the play would have been disrupted or shut down.

I also wasn't helped by the broadcast. Not having it in HD was hard, not because of the picture quality, but because those extra 5-10 yards that you can see down the field on a widescreen make this a lot easier to do.

So instead, I thought I'd take a look at a few select moments from the game in more detail and see what we could apply forward.

USF's first play from scrimmage looked like a called run. Stony Brook certainly expected one, as both safeties started towards the line at the snap, basically giving the Seawolves nine in the box. The offensive line started blocking like it was a run off the left guard. (They may have been fortunate not to be called for an ineligible man downfield.) But the left corner was playing a good 10 yards off Dontavia Bogan. Daniels read the run defense and quickly threw it out to Bogan, who took a step back from the line when he saw Daniels turn to throw him the ball. With everyone committed towards the middle to stop what they thought was a run, Bogan only had to make his man miss and he could outrun everyone to the end zone. That's exactly what happened.

If this was in fact a checkdown from run to pass, then these are the kinds of plays USF will need to recognize and make on Saturday. It's hard enough to move the ball against Florida, and if there are easy yards available then they have to take as many as they can get. I don't think the Gators will let Bogan run 60 yards for a touchdown on a play like this, but it can help the Bulls stay ahead of the chains.

Some more clips after the jump.

Take a look at these three punt setups and try and guess which one was called for an illegal formation penalty. 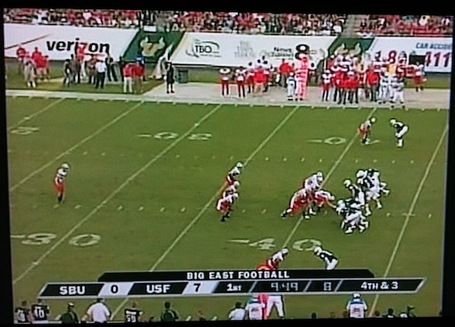 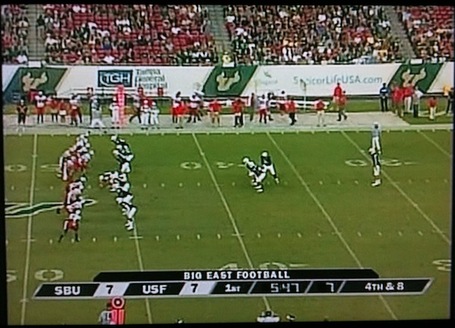 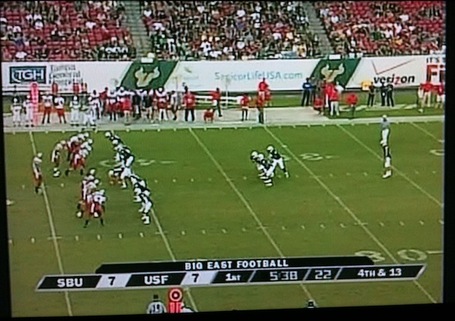 They all look pretty much the same, right? Seven guys up on the line of scrimmage, three upbacks, and the punter. It turns out the second one was called for illegal formation. The officials said USF only had six players on the line, even though none of these formations would appear to be legal based on that explanation. The call wiped out a Justin Brockhaus-Kann punt that Donte Spires had downed inside the 5. Then when USF lined up to rekick, they got into the EXACT SAME FORMATION. No penalty this time. But instead, the snap was low, Brockhaus-Kann fielded it on a knee, and the play ended immediately. The blown call cost USF about 70 yards in field position, and eventually 7 points.

CLIP #3 - WAS THE BLOCKED PUNT REALLY A TOUCHDOWN?

This one confused me. First, I still don't know why Drew Evangelista, the Stony Brook punter, would go ahead and kick the ball after retrieving it in his own end zone with two Bulls rushing towards him. The punt was blocked easily, and it rolled around in the back of the end zone. Chris Lane had to step over the end line to avoid Evangelista, and with his last step before picking up the ball for a touchdown, his foot was still partially on the end line and therefore out of bounds.

I looked for about 20 minutes to try and find the NCAA's rule on establishing yourself back in bounds before touching a live ball if you went out during a play, or if you're even allowed to touch the ball at all. But I couldn't find anything. I also couldn't figure out what the penalty would have been if there was one. Is it a safety because the ball was touched in the end zone, and the illegal touching makes it a dead ball? Does Stony Brook get to punt it again? I guess I shouldn't complain, because a touchdown was the best outcome.

I already knew B.J. Daniels had a huge throwing arm, but seeing some of the throws he made on Saturday also showed me how fast he gets rid of the ball. There was one play that was very similar to the spring game, where the pass went for a touchdown. Evan Landi was supposed to run a hitch pattern, but saw the coverage and kept going up the field. Just as Landi got into the seam of the cover 2 defense, Daniels fired a pass in there for a 22-yard gain.

That's a hard throw to make and time out correctly unless you have superior arm strength and/or a quick release. Daniels has both. In fact, he wasn't even really set with his feet to throw that pass -- he just flicked the ball out there as soon as he saw he could hit the seam. Next week, with the windows likely to be much tighter when the Gators go to a zone, those talents are going to be vital.