Earlier this week, I got the e-mail about 2011 baseball season tickets for the new USF Baseball Stadium. Obviously this stadium is going to be a huge improvement over Red McEwen Field, which was just three sets of bleachers with no chairbacks. And there's going to be a chance to improve the revenue that baseball generates. But this seating chart pricing seems really out of whack.

If I lived in Tampa and I wanted season tickets, I have two choices - general admission seats for $50 (the same as last year and maybe a little too low), or field box seats for... $500. 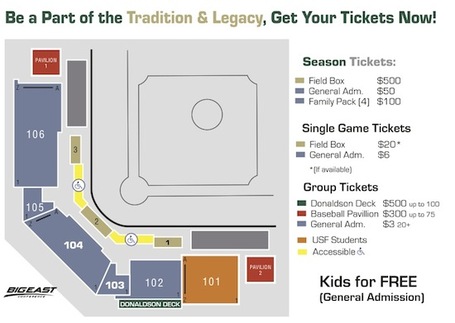 And from what I can tell, these field box seats don't include any special perks. No free food. No concierge or waiter/waitress service. Nothing like the Green and Gold Room for basketball donors. No Diamond Dolls standing next to me holding a shade over my head for the whole game.

That's an awful lot of money for baseball season tickets, even good ones. So I decided to see how much the most expensive season tickets were for the eight teams that reached last year's College World Series. None of them even came close:

Look at some of those deals! I can get season tickets to both UF and FSU baseball, who both play in better conferences, for a total of $275, or I can buy a field box season ticket to USF for $500. If I were just a random baseball fan, I know what I'd pick.

Obviously USF's field box seats are way out of whack with what some of the best current programs are charging for baseball season tickets. But I did find some schools where these $500 box seats are comparable... as long as you ignore some obvious facts.

Hang on, though, there's more baseball in town. Let's not forget the Rays over in St. Petersburg. I wonder, how far would $500 take me at Tropicana Field this season?

I could get the Rays' Weekend Plan, which includes all 39 Friday, Saturday, and Sunday games, and sit in the Upper Reserved or TBT Party Deck sections for $504.50.

I could also get any of the Friday, Saturday, or Sunday plans (22 games apiece), sit in the Outfield, Upper Box, or Upper Reserved sections, and have money left over.

And that's for a team that won the toughest division in the majors two of the last three seasons and went to a World Series in 2008... not a college team that hasn't been to an NCAA tournament in almost a decade. So in closing, I can't wait until the first televised USF baseball game, when all the seats in view of the camera are empty because someone priced all the fans out of them.