Share All sharing options for: Thursday Night Shows That Were Much Worse Than Both "Whitney" And USF Football Games

I remember seeing this tweet from Brett McMurphy while I was getting caught up on Thursday night: 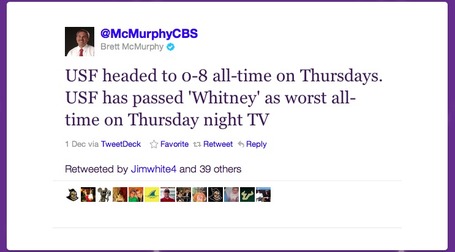 And I thought, "Oh come on Brett, do some research, man. There have been WAY worse shows on Thursday nights than 'Whitney.' " But I was driving (remember kids, do as I say, not as I do) and it would have taken some research to come up with a better worse show, so I left it alone.

Now that we have lots and lots of time to kill, though, here's a list of shows that were definitely worse than "Whitney" that aired on Thursday nights in prime time:

Hope you all enjoyed that retweet! Because everyone sure enjoyed this game!

Ha ha, you blocked this out of your mind, didn't you? Well, it aired on Thursday nights for exactly two weeks this past spring. We all knew it was going to suck, and lo and behold it sucked even harder than anyone could have even imagined.

The semi-autobiographical sitcom stars Paul Reiser as a former television star who hasn't worked on a television series in several years. While he has enjoyed spending quality time with his family during this break, he feels he needs something more. Deciding to shake up his life a bit, Reiser enlists his friends to help him find the next "big thing" to occupy his time.

Remember that show, the one Jerry Seinfeld made up, that was so spectacularly unfunny and uninteresting that you couldn't believe his name was on it? Yeah, that one. When you have a show that is so lame that not even Ricky Gervais can make it funny, then you've really done something horrible.

The premise of the show involves real-life couples who have been having an ongoing argument. In season one, a video clip was shown to a three-member celebrity panel depicting both sides of a dispute. The celebrities made humorous observations, deliberated the merits and voted on who should win the debate. Though the Marriage Ref (Papa) took their votes into consideration, he was free to make his own decision about who was right.

Who wouldn't want to see a vehicle for Joey Tribbiani? Well, pretty much everyone, as it turned out.

Matt LeBlanc portrays Joey Tribbiani, a struggling actor and food lover who becomes famous for his role on Days of our Lives as Dr. Drake Ramoray. Joey is a womanizer with many girlfriends throughout the series, in keeping with his character on Friends. The series roughly picks up where Friends left off, with Joey at the beginning of the show making a move from New York to LA to proceed with his acting career. He is constantly talking about food or eating sandwiches or pizza.

Leave it to Fox to take a show like Survivor and make it about 1000 times more lurid and pointless.

Temptation Island was an American reality television program broadcast on Fox in which several couples agreed to live with a group of singles of the opposite sex, in order to test the strength of their relationships.

This series answered the question, "How terrible does a show have to be for its star to want to get out of their contract to appear in said show after two months?"

New York News was the story of the fictional New York Reporter, a struggling tabloid in the nation's largest, most competitive newspaper market, New York City....

(Mary Tyler) Moore was reportedly very unhappy with how her character was written, as a tough, unsympathetic, and unglamourous woman who peered out at her subordinates through thick "Coke-bottle" glasses. She was reputedly in negotiations to get out of her contract to do the program when this was made unnecessary by CBS's cancellation of it due to low Nielsen ratings two months after its premiere.

God knows what NBC was thinking putting this in the middle of their Thursday night comedy lineup. This was at the time when Fox had "Martin" on Thursday nights, except that show was... well, it wasn't this:

The premise of the show stars (Roger) Kabler as Bobby Soul, a white man who gets hired on a black radio station after being initially mistaken as a black man...

The show was heavily criticized for relying on traditional black stereotypes for its humor. TV Guide said that: "What makes a show built on white jokes any better than a show built on black jokes?"

Oh, but everyone loved Happy Days! How can you put one of its spinoffs on this list? Does this sound like a show anyone would want to watch?

The series follows the exploits of Joanie and Chachi as they moved to Chicago and tried to make it on their own with a rock band and a music career. It mixed the traditional elements of a sitcom with musical performances on each show by Baio and Moran. In fact, the beginning credit sequence of the show had them singing to each other. Their backup band consists of a spaced-out drummer named Bingo and Chachi's blase cousins Mario and Annette.

There have been some pretty God-awful shows on this list, but I'm pretty sure this is going to be the worst of them all. See what you think of this show:

Timothy Blair is a Hollywood talent agent. He falls in love with Julie Renfield, a British actress who is visiting the United States to do a movie. After that movie is finished, she returns to England. To assist his brother Gene complete a photography assignment, Timothy dresses as a hippie and poses for a photo shoot. The photos are sent to a modeling agent in England who assumes that they are of a woman. He offers "her" a job.

Knowing that this would be the only chance to go to Great Britain and be with Julie, Tim accepts and dubs himself "Timmie". Tim has two weeks of vacation to spend as much time with Julie as he can, but when as he is about to leave with his brother, Gene loses £11,000 gambling. Unless he pays him back, Tim has to continue being Timmie for a while longer.

You can't even count the ways that this show is insulting and offensive! Somehow it made it four months before being canceled. It should have gotten The Paul Reiser Show treatment.