It is the official opinion of this blog that recruiting and MSNBC’s To Catch a Predator are somewhat interchangeable. I think less about the fine professionals like Tom Lemming and Andy Staples during this annual ritual and more about Chris Hansen. "Oh, hey guy clicking refresh on his Internet browser at work all day waiting to see where young men you've never met decide to go to college..." 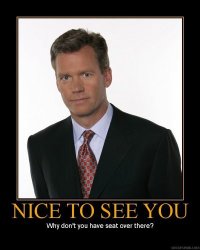 Fixating on the potential decisions of 17 and 18-year-olds that are wrestling with what is already one of society's most difficult decisions is at best awkward. But instead of bringing wine coolers and Natty Light, recruitniks carry Rivals rankings and ESPNU150 lists like they are the gold standard of determining success, even though Boise State and TCU have been doing pretty well with rosters that have less star power than Celebrity Rehab.

You have to have talent to win at the highest levels of college football, that is indisputable. And there is a correlation between rankings and on-field success in the BCS conferences. But the type of talent that fits your system might not translate to YouTube clips and freakish bench press numbers. Of course I’d want Jadeveon Clowney to attend USF this fall. But if I’m following the rules as a booster of my institution and of the NCAA, since I have no prior relationship with Clowney I cannot affect his decision in any way, shape, or form. So if I’m really into recruiting, I’m either participating in the world’s largest high school gossip ring, or I’m cheating.

How to fix it all, after the jump.

Even setting aside the creepy underage stalking part, it just gives me a headache. "He's going here, no he's going there, now this team is in it and he might have given a verbal indicator and we're going to parse every f---ing word he's said for the last 12 months because some scout thinks he could shore up our outside linebacker spot!"

I worked in college athletics long enough to know that coaches in all sports, for the most part, dread recruiting. It is the necessary evil that is also the lifeblood of your program. As a coach, your fate as an employee, teacher, leader, and professional is usually tied to the whims of teenagers, many times ones as stable as Charlie Sheen with a briefcase of blow. It's not a pleasant place to be, but it does come with the territory. But what I can’t understand is why fans and followers of teams so desperately want for information about the part of the job the people that actually do it hate the most.

There are legitimate crises that need to be addressed in collegiate recruiting, particularly in football. Schools like Ole Miss are making a mockery of the process. Nick Saban is doing Nick Saban things to game the system. And since there’s shady behavior happening, George O’Leary is of course involved. And when something like what Kiffykins and Orgeron did here can ever happen, the system is legitimately crippled and in desperate need of repair.

There are some people out there screaming rightly about the problems with the modern state of recruiting and roster management. Oversigning.com tries to bring attention to the immorality and inequities of the process, but when they do one of the best sites on the SBNation network breaks out their tinfoil hats and uses the issue of oversigning to start refighting the War of Northern Aggression. Then they recommend we just give every high school senior that signs an LOI a six-year completely guaranteed scholarship, and allow them to quit the football team whenever they want.

Promising a prospect a scholarship then rescinding it later because of your mismanagement is absolutely not ok. The principle of in loco parentis holds true at every accredited higher education institution in America. Oversigning betrays the athletic department’s legal and moral responsibility. It is that simple, and that’s why the B1G banned the practice 55 years ago.

So let’s fix it in a way that could actually get passed. Here is my Completely Infallible Plan to solve the majority of the issues involving recruiting, and make the process more fair for everyone involved.

For those of you that pay more attention to the sport on the field instead of the insanity off of it, here are the general numbers surrounding National Signing Day: Each FBS team has 85 scholarships for student-athletes (S/As), they cannot give more than 25 to prospects in one year, and 2011 will be the first year schools can only offer 28 letters of intent (LOIs) from February 2 until May 31. If you sign more than 25, or end up with a total of more than 85, you’re either cutting S/As, having them transfer, having prospects not qualify either by NCAA standards or the academic standards of the school, or having prospects not enroll until the following spring, and counting them towards the following year’s class.

1. Prospects cannot sign an LOI until they have paid an admissions deposit to the institution and have formally applied for admission. Students may begin applying whenever their institution begins accepting applications, including early admission. Once a student is admitted, he/she may sign an LOI at any time, including before National Signing Day, but may not sign before the first day of their senior year of high school.

2. Schools may offer an LOI to any student that has formally applied. Only 25 LOIs may be offered and accepted in one year.

4. A prospect that is issued an LOI, signs and returns it, and is subsequently denied admission for any reason (academic, performance-based, etc.) by the institution, shall be eligible to receive two calendar years of education at the school of their choice to be paid for by the school to who they returned their LOI. That prospect, if they become an s/a at another school, will not count against the scholarship limit for any team at any school they attend, and can compete immediately.

5. Once an institution has received a signed LOI from a prospect, the institution has 24 hours to post that signee on their website, and report it to the NCAA Eligibility Center. The Center shall update a Web site daily with new signees so any other potential prospects can see how many members of a class have already signed with any FBS school.

6. Once schools have signed a maximum class of 25 student-athletes, or the school publicly declares a formal end to their recruiting for the current year, schools may continue to sign prospects and have them count towards the following recruiting season totals immediately (often referred to as "greyshirts").

7. Up to 10 "greyshirts" may enroll immediately with a scholarship, and count towards the following year’s recruiting class. "Greyshirts" may not practice or play with the team, but can attend up to 4 hours a week of conditioning workouts with a strength coach, though no assistant coaches or student-athlete’s on the active roster may be present. "Greyshirts" may attend all outside team functions as well as travel to any bowl game. A "greyshirts" five-year clock will not start until they count towards the roster limit of their team (generally the Spring following their greyshirt semester).

8. Since schools will no longer have more than 85 scholarship student-athletes with athletic eligibility remaining, the incentive to "cut" current S/As that aren’t performing as expected is enhanced, and S/As may be pressured to take medical scholarships to help eliminate roster pressures. Therefore the appeals process for s/a’s that have their scholarship non-renewed must be enhanced and strengthened. S/As will first be given the standard internal appeal, and if that fails, an automatic external appeal to a board comprised equally of NCAA administrators, current intercollegiate athletics professionals, and Student Athlete Advisory Committee members (current S/As) from other institutions.

9. Any S/A that is non-renewed shall count against the school for one additional year after their non-renewal, and the school may not block the immediate transfer of that S/A to another institution. Conference rules against intra-conference transfers may still apply.

Under this Completely Infallible Plan, schools can still oversign and greyshirt, so I think I just got the SEC on board. But the prospect will know exactly what they’re getting into before they sign an LOI. And if a school offers an LOI, then doesn’t admit the prospect, the prospect will get two years of a free education anywhere they can be admitted. That prospect will also be extremely valuable to any other team because they won’t count against the scholarship limit, and they won’t cost a dime for two years. You can’t really beat scholarship talent at walk-on prices if you’re a football coach.

Also potential prospects will have incentive to make their decisions earlier, and get their paperwork done as quickly as possible. Once they’ve applied for admission to a school, they’ll find out real quick if the coaches are truly interested in them, or if they are being strung along. Because once they send in their deposit, there’s nothing holding the school back from sending that LOI the very next day. And if they are getting strung along, it’ll be much easier to put the pieces as to why together because they’ll be able to see how many LOIs a coach has available, and they can check with Rivals or whomever to see who else is still being recruited.

Coaches will also need to be pickier about releasing current players, because they will be a man short the following season. And if a player is released, a coach will have tremendous incentive to help that s/a find a new home, as they’ll only get the scholarship back for the following season if they do.

We’ll have more to say about this tomorrow as a snowed-in Voodoo and I will have some sort of Exclusive Team Coverage. We’re already working on our hat concealment techniques… and swagger. And yes, that video is part of the reason why this is National Somewhat Creepy Day.

But if Jadeveon Clowney is still looking for a home… I’m sure a school that’s produced Jason Pierre-Paul and George Selvie in the last two years underneath palm trees with gorgeous weather, women, and a brand new practice facility that might be able to find a place for him. I’m just saying.