On Chris Creamer's Sports Board, there has been a leak of a possible new uniform for USF football this season. There have been rumors about a tweaking the uniforms for 2011, but this screencap from the upcoming NCAA Football 12 game is the first picture that has been released.

Check it out after the jump. 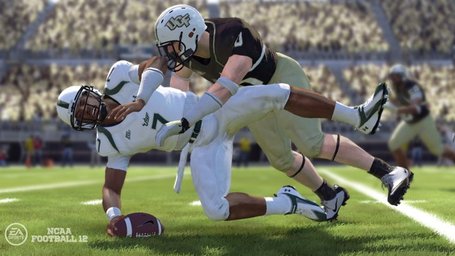 1. Like the relative simplicity of the set. Under Armour have always kept our uniforms pretty simple, and this is no exception.

2. The shoulder striping kind of looks like the USF logo wrapped around the collar. Nice touch if this was the case.

3. Can't really tell from the picture, but it looks like the pants are plain like the previous set.

4. Looks like the white helmets once again the primary helmet this season. We've said numerous times that the white helmet is a much better look compared to the gold version.

5. WHY IS B.J. DANIELS BEING SACKED BY A RANDOM UCF PLAYER!?! The UCF/Tiburon conspiracy knows no bounds.

All in all not much change, but I do like the minor upgrades if this is the new uniform for next year. Guess we will find out soon enough.

What are your thoughts? Let us know in the comments below.