The last time Shaun Noriega made a shot from the field before Saturday's game was way back on January 5 against Villanova. Since then, he's fallen completely out of the rotation and has mostly seen mop-up duty in the last few weeks:

But with USF desperate for offense and down 46-41 with less than three minutes left on Saturday, Stan Heath decided to roll the dice and give Noriega a shot.

Bringing a cold shooter in doesn't work every time (just ask Mike Dunleavy). But it was the perfect move in this game. Let's take a look at those two shots and how the Bulls set him up to save the day. 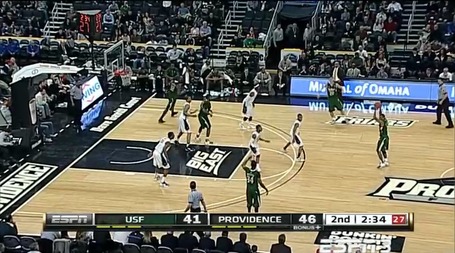 Noriega starts out by the coach's line and gives the ball to Anthony Collins about 30 feet from the rim. As he and Hugh Robertson pass it back and forth... 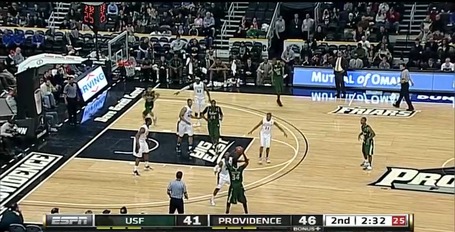 Noriega works around the back end of Providence's 2-3 zone and sets up behind the 3-point line, about perpendicular to the left elbow of the lane. 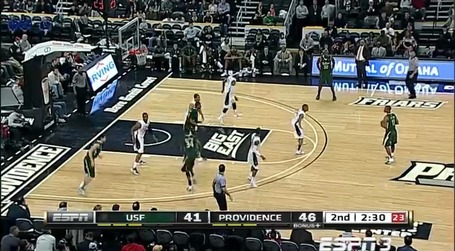 Robertson jumps into the lane to create some traffic and force the Friars' defense into the paint with him. This is Collins' cue to begin driving. 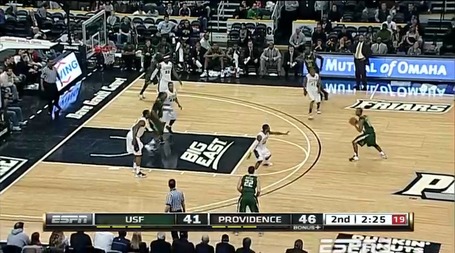 Gus Gilchrist comes out to the 3-point line on the opposite side of Noriega to wait for a kick-out. But his man also leaves to guard Collins as he gets into the paint. Vincent Council also follows Collins... 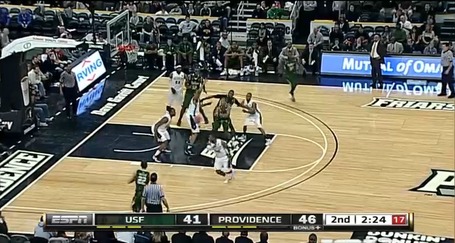 so when Collins dishes to Noriega, who has been sliding down the sideline along with him, Shaun has just enough time to get off a 3-pointer from the left corner. Swish. 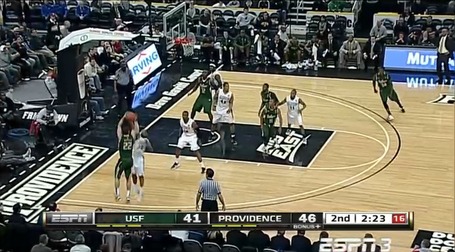 (Council does a great job of recovering and closing out, but it doesn't matter. Collins also does well to throw the pass so that Noriega continues moving to his left, giving Council a little bit further to go to defend it.)

USF called a timeout, and Noriega came out for defensive purposes. Providence was called for a questionable offensive foul on their next possession. This gave Heath a chance to put Noriega right back in the game. Unlike the first three-pointer, which came off a drive and kick by Collins, this play was specifically designed to get Noriega open for a three. 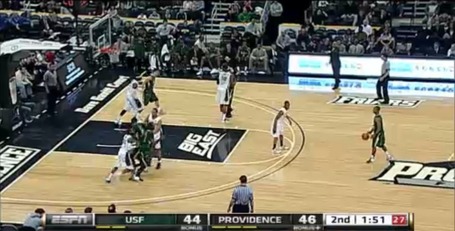 Again, Noriega is on the right side beyond the arc. Robertson flashes out on the left side to get the pass from Collins, while Toarlyn Fitzpatrick starts to extend out. 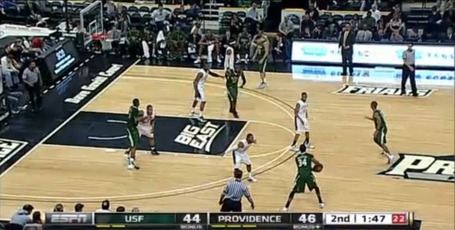 When Robertson begins to drive toward the middle, Noriega starts circling around the back of the defense again. 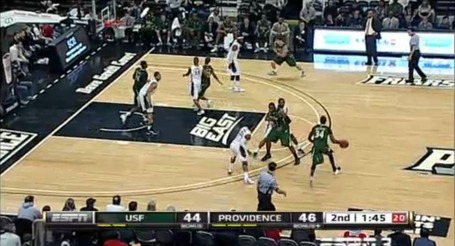 This time, the Friars are in man, but LaDontae Henton is late to follow him around the corner. Gilchrist had stepped out to set a screen for Noriega, but he doesn't really need it, so Gilchrist backs off and just brushes Henton, to make sure he doesn't get called for a cheap foul the way Kadeem Batts had just been called for on the other end of the court. 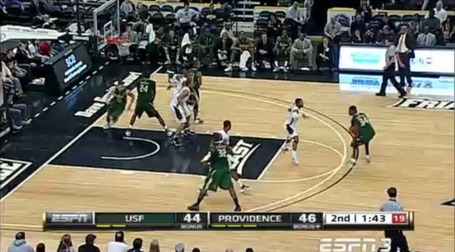 As Noriega comes around to the left wing, Robertson passes him the ball. Fitzpatrick shuffles down to set a pindown screen on Henton while Shaun pulls the trigger. Batts, who has been loosely guarding Fitzpatrick, isn't fast enough to challenge the shot, and Noriega hits another one. 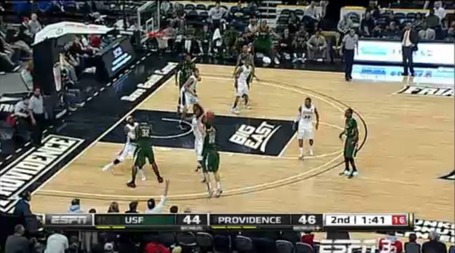 The best part of this play was seeing Noriega coming around the corner, and realizing they were setting him up for a go-ahead three, and telling yourself, "This would be so awesome if he made this one too." And then he did, and the bench went crazy, and Providence called a timeout, and the Bulls ended up winning, and it was the most satisfying win of the season so far.