Hopefully you read our FanShot last night about J.D. Alexander's disgrace of a budget, which called for USF to have its state-provided funding cut by up to 72% when all the reductions and funneling of money to Alexander's pet project at USF Polytechnic were added up. First, you need to read Mike's post at The Bull Rush and follow up with your state legislator to make sure they do the right thing and stand up to this pathetic bullying tactic. Times are still tough in Florida, but there's tightening the belt, and then there's being reckless and vindictive.

And then let's mock him!

Most of you speak Internet meme. In the comments, we'd like you to use your favorite meme to make whatever point you want to make about Alexander. Example: 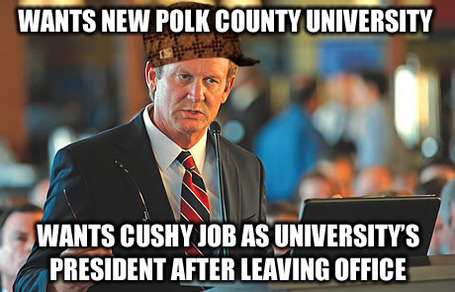 Use whatever meme you want. Get creative and mean, too. (Although you probably shouldn't be profane -- who knows where these might end up before this saga is over.) The best one, as decided by the staff, will receive a prize of some sort, like a Bulls Heaven gift card or something out of our prize closet.