Share All sharing options for: USF 56, Villanova 47 - #TheQuestFor20 Is Complete

I thought #TheQuestFor16 was kind of ridiculous way back in November. Then I thought there was NO WAY that they could finish #TheQuestFor20. Wrong again. The Bulls have doubled their win total from 2010-11. Amazing.

My favorite part of USF's run towards the NCAA Tournament, even better than the fact that YOU GUYS USF IS ON A RUN TOWARDS THE NCAA TOURNAMENT, is when the national college basketball press tunes into their games and they become repulsed by what they see. I wonder if the Bulls would get some more run if they won games 77-70 instead of 56-47. When you watch 20 straight games like this, you get used to it and start to appreciate the style of play. When you watch one game like this, you tend to recoil in horror. People give USF their due respect, but it's kind of grudging because the games are so inartistic. It's like Ben Howland's wet dream out there.

Especially when you have a stretch of like six minutes in the second half where USF and Villanova combined for a grand total of two points. I don't even know what to tell you about that. 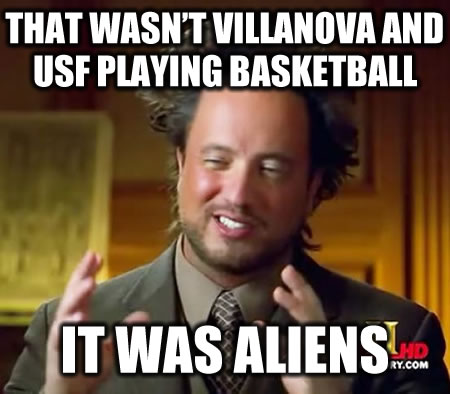 Oh. Well that explains everything.

Speaking of aliens, Mike Brey and Notre Dame are up tomorrow night. At this point USF is a pretty good bet to make the NCAA Tournament, but beating the Irish would remove all doubt.