Share All sharing options for: How USF 2012 Opponents Fared - Week 3

Every week we'll fill you in on how the other 11 opponents on USF's 2012 football schedule did. Where available, the links take you to the SB Nation site and their recap of the game.

Hey, did you hear the Big East went 3-0 against the ACC this week? Of course not -- no media outlet would ever report anything positive about this league. Anyway, on to this week's results:

CHATTANOOGA - W 35-0 over Glenville State. Jacob Huesman threw two touchdown passes in the first quarter as the Mocs blew out the Division II school. Astute USF fans will remember that Glenville State is where Rich Rodriguez developed his innovative spread offense, which his protegee Rod Smith later brought to USF.

NEVADA - W 45-34 over Northwestern State. Nevada held off Northwestern State in a game that featured 1,240 yards of total offense, 585 by the lower-division upstarts. USF had 572 yards against the Wolf Pack, but let's try not to read too much into that.

BALL STATE - W 41-39 at Indiana. Ball State stakes its claim as the third-best football school in Indiana, by beating the Hoosiers for the third straight year. They should schedule Purdue and take a shot at #2.

FLORIDA STATE - W 52-0 over Wake Forest. The Noles are back! No, really, we mean it this time! Really really really! All kidding aside, the big, bad Seminoles might really be back after thrashing a Wake Forest team that's given them trouble lately. FSU has a heartwarming story in little running back Chris Thompson, who ran for 197 yards against the Deacs one year after breaking his neck in last year's game. FSU gets its first real test, next week against #10 Clemson.

After the jump: how USF's conference opponents did.

WEST VIRGINIA - W 42-12 over James Madison. The Mountaineers, always a Big East title threat and key game on the Bulls' sched -- oh... sorry... I-- I forgot for a second. *sniffle*

TEMPLE was off. They travel to Penn State this week, which I'm sure won't be awkward at all.

LOUISVILLE - W 39-34 over North Carolina. The Cardinals ran out to a 36-7 lead, and led 39-14 in the fourth, but had to withstand a furious comeback from the Tar Heels. The Cards have looked like the class of the Big East so far, but acknowledged the need to work on finishing out games.

CONNECTICUT - W 24-17 over Maryland. Not much to say about this game except RANDY EDSALL NASCAR FACE: 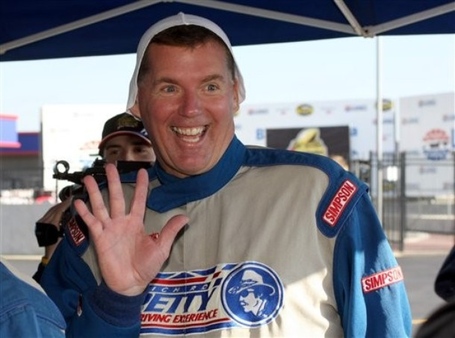 Ah, that never gets old.

MIAMI - W 38-10 over Bethune-Cookman. Bethune-Cookman actually led this game -- for 12 seconds. After a B-CC touchdown, Miami wonder freshman Duke Johnson returned the ensuing kickoff for a touchdown, and scored three more offensive touchdowns in the rout. Let's hope the Canes use Duke Johnson against USF like they did Storm Johnson: he ripped off a brilliant 71-yard touchdown run and was never heard from again.

CINCINNATI - W 23-7 over Delaware State. As with Syracuse and Nevada, Cincinnati struggled against their lower-division opponent a little more than they should have, but aren't panicking about it.

PITTSBURGH, W 35-17 over Virginia Tech. We all know what PIttsburgh did. And would anyone be surprised if they lost to Gardner-Webb this week?