To Storm Or Not To Storm? A Lesson in Victory Context

It's every college fan's dream to have the opportunity to storm the field or court after a huge win for their school. But when exactly is the right time to rush the field?

Share All sharing options for: To Storm Or Not To Storm? A Lesson in Victory Context

In 2007, USF upset then-ranked #5 West Virginia, following a head-turning win at Auburn and a full-on annihilation of North Carolina. That marked the second and last time USF fans leaped over the barrier walls onto the field to celebrate with their team. With good reason, too. That win over the Mountaineers told everyone the Bulls were a legitimate threat to the rest of the league and to anyone in the country who dared schedule them. Obviously things changed that year, and by December there wasn't much to cheer about at all. Since then, USF fans have been wise enough to refrain from storming the field or the basketball court (not that there's been much reason to), but fans just love stepping on that playing surface.

Unfortunately, some schools really lack discretion to know when it is appropriate to send your fans to the field or court after a win. Recently Utah fans were mocked across the Internet for storming the field three times in one game against BYU, but historically it's been BYU that has been by far the worst culprit of illegitimate field-rushing. Maybe because that's just the only kind of fun they're allowed to have in Provo. In 2006, BYU won its first bowl game in a decade, burying an average Oregon team. The 38-8 thrashing was apparently so compelling that Cougar fans decided that this was a good time to rush the field.

I get it. You haven't won a bowl game in a while. But when you're ranked #19 in the country, your opponent better have been pretty damn good for your fans to run onto the field. Oregon was 7-5 at the time. Maybe it would have been OK to rush the field if BYU had come back from, say, a 31-0 deficit in the fourth quarter. Instead, a far superior BYU team blew out a crappy Oregon team, and still fans decided to jump on the field. And it wasn't even their own home field.

It doesn't stop there. Last year, BYU played their annual rivalry game with Utah State. Apparently beating a 1-3 WAC team for the 16th time in 17 years, by three points, is enough to make those fans go nuts:

The last touchdown was exciting, but extending your dominance over a far weaker opponent in a "rivalry" that's about as one-sided as Hammer vs. Nail is not worth rushing the field. Really, your team should be scared that the Aggies even got that close to winning.

But did it stop there? Of course not! Technically this next one happened before that football game, but still this proves that BYU's habit of rushing the playing surface is a multi-sport problem. Here, Jimmer Fredette just finished off a 46-point night as #9 BYU beat down #4 San Diego State.

OK, you just beat the #4 team in the country. But if you're also in the top 10, you pretty much forfeit all reason to storm. You're supposed to go into these games thinking you've got a serious chance at winning. When a top 10 team beats another top 10 team on their home floor, it's a big win, but that's hardly considered an upset.

I'm not here just to make fun of BYU, though. Last basketball season seemed to be the year of the storm. The one that stands out most, though, is when unranked UCF beat also-unranked Memphis for the first time. The win wasn't all that impressive, though the end of the game was pretty exciting, as PF Keith Clanton finished off a three-point play with half a second left to win it.

Obviously a win over the team that always wins your conference is a big deal, but when your record is better than theirs and neither of you is ranked, maybe tone it down a notch or five.

I'm not trying to be a downer on your wins, everyone. Obviously the victory is what matters. And I'm not anti-storming, either (See the aforementioned Utah State team, rushing the field in 2010 after beating BYU for the first time since 1993. Or Rutgers against USF in 2007, as much as it sucks to watch. Washington got it right last night after beating Stanford, though Stanford may be overrated anyway). Still, there should be an etiquette and logic about rushing the field. I don't consider myself an expert by any means, but I've seen too many highlight clips with fans that go way over the top to celebrate a basically meaningless win.

So as a public service, here is a handy flowchart to use when the decision must be made to storm or not to storm: 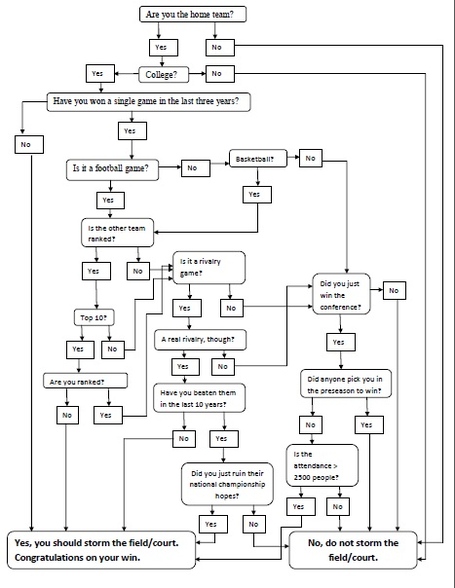 Which brings us to tomorrow's game. We can't call FSU a rival, and we can accept that. But a top 5 team doesn't roll around into Tampa very often. Clearly, things aren't quite going the way we've expected them to so far, but the season can still be salvaged, and pulling off a shocker against FSU would be quite a way to do it. And if USF wins this game, well, you've got the green light, everyone.

I realize that this is incredibly wishful thinking, and fans around here aren't nearly as optimistic as me, but my philosophy is that you can't go into a game already deflated. So get into that stadium and be as loud as you can, fans, and hopefully I'll see you and the other 12,500 students and all our rowdy friends dancing down in the end zones.

After all, it's happened before, right?