Thud: An Attempt To Make Sense of the Memphis Game

What the hell was that, and is there any more of it coming?

Share All sharing options for: Thud: An Attempt To Make Sense of the Memphis Game

USF's performance against Memphis reminded me of this viral video of a little girl walking on ice for the first time:

She looks at it tentatively, stumbles, but deftly regains her balance. Then when you think she's got it down, she just leans forward and slowly falls flat on her face. (The thud sound is what really sells it.)

The Houston game, which USF damn near won, made us all think this team finally had it together. The offense was moving the ball, and the defense played with ferocity and enthusiasm. We were certain these newly revitalized Bulls would beat the Memphis Tigers, a team with a similar all defense/no offense profile, minus a wunderkind freshman quarterback and home field advantage.

But the problems we saw early in the season manifested themselves again. My immediate reaction was that it was just like the FAU game, a game we also expected to win. But now that I look at it more closely, the differences seem more superficial, especially on offense.

The first obvious comparison is the failure to punch in a goal-line opportunity early in the game. We dissected what went wrong in the FAU game, but what went wrong here? 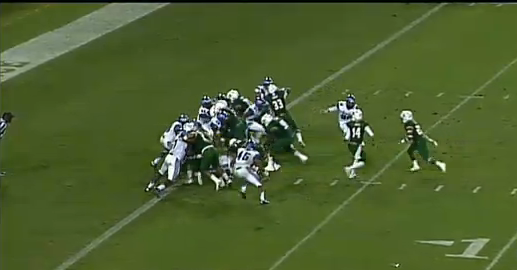 How did this play not end in a touchdown? The offensive line is getting good push. The fake is well executed; you can see Memphis players spying Mike White and Marcus Shaw, even though neither of them has the ball. #96 Lawrence Martin, all 6-3 and 316 pounds of him, has the ball and a head of steam. I've gone all Zapruder film on the highlight clip, and it looks like he just drops the ball, for no discernible reason. He got the handoff OK, he just dropped it.

The sad thing is, this is a good play call. The offensive line doesn't have to hold their blocks for long, the ball carrier is bigger than most of Memphis' defensive linemen, and everybody loves the FAT GUY TOUCHDOWN. But Martin just dropped the damn ball for some reason. On his first carry. Can we really assess blame on this play, or is this just the kind of thing that happens when the universe hates you?

Speaking of which: what happened to Marvin Kloss' first field goal attempt? It looked good, and it certainly had the distance, but took a sharp left turn at the last moment. Even the announcers thought it was good. According to @JoeyKnight, Kloss said the misses "a lot had to do with the snap on those holds." Which is an odd way of phrasing it. But when you're a kicker from Collier High, you just can't blame the holder. LACES OUT MATTIAS.

On the other side of the field, Memphis had great luck with the kicking game. On their first field goal, their holder Tom Hornsey corralled an awful snap. He had to reach up and to the right of his face to catch the snap, then get it spotted. A split-second or a couple inches more, and that's another field goal fiasco, maybe even a momentum-changing return touchdown like USF got against Cincinnati.

Jake Elliott also hit a whopping 56-yard field goal just before halftime. Coach Willie Taggart declined a holding penalty that would have made it about 3rd-and-21 near midfield, opting instead to leave Memphis in 4th-and-11 from USF's 38. It's easy to fault the decision because it ultimately gave Memphis 3 points, but making a freshman kicker hit from that distance is an understandable move. Give Elliott credit for making a clutch kick, and Hornsey for a clutch play earlier.

Just from those two missed USF field goals, and two excellent plays from Memphis on field goals, and the Martin fumble, that's a 19-point swing - more than enough to decide a game between two low-scoring teams. It's tempting to chalk this loss up to bad bounces of the football, but I'm seeing other bad habits from earlier in the season manifest themselves anew.

After the Miami game, we talked about a play where Mark Joyce seemed more interested in ringing Duke Johnson's bell than tackling him short of the first-down line. While I can't think of any concrete examples off the top of my head, I could sense that mentality, the same kind of body language and frustrated gestures, creeping back into view. After Memphis converted a key 3rd-and-4 during their touchdown drive, you could see Aaron Lynch throw his hands in frustration. There was a lot of that.

The team seems frustrated. They're trying so hard to "make plays" that they're not making plays. One memorable example: Chris Dunkley fields a kickoff eight yards deep in the end zone, starts to kneel for a touchback as he should, then changes his mind and tries to bring the kick out. He got to about the 12 yard line, putting USF in yet another difficult field position.

Speaking of which, why is this still happening? Part of the reason USF has struggled with field position all season is because our kick returners constantly try to bring kickoffs from deep in the end zone. I understand the desire to make a big play, especially when your head coach is screaming "I'm looking for playmakers" at every opportunity. But you have to be smarter (and/or better coached) about when to try. Sometimes the best play is to simply start at the 25. Hell, that would have significantly improved USF's lot in the Memphis game. (Average starting position in the second half, other than the onside kick recovery, was about the 15.)

Speaking of that onside kick, that was a nifty little play, wasn't it? I wish we'd saved it for a time where it could have helped us win a game. Here's the clip, though it doesn't do justice to the fakery that took place before the kick. Two different players faked the kick, and then Ruben Gonzalez took the kick. It's tough to execute novelty onside kick plays because someone invariably goes offside, but that didn't happen here. They executed a complex trick play perfectly.

Which leads me to another difference between the Memphis and FAU games; after the late pick-six that ended the game, USF marched down the field and stuck the ball in the damn end zone. Yes, it was against an indifferent defense in a decided game, but that's still more resilience than we've seen so far this season. Mike White threw a nice deep ball that Andre Davis went and got.

Which doesn't seem like much, but maybe ending the game on a positive note is just what this team needs. This USF team seems to play much better when things are going well, than in coming from behind. Not just because our offense isn't built to overcome huge deficits, but because the team's mentality seems much better after it's had a little success. When USF has had things go their way, they've played fairly well: the two wins, and the Houston game after Mike White got cooking. Even USF's first drive of the Miami game looked pretty good. And the season-opening touchdown run by Marcus Shaw. But a few things go wrong, and it just snowballs on us.

I think we'll see a better performance against SMU. On a macro level, this team isn't throwing in the towel. They want to win, they're sick of losing, but the little things haven't been going right. Coach T's bus is sputtering, but at least it's moving. That's more than we thought possible in September.