Herget scrambled early but settled in nicely, retiring 12 of his last 15 batters before being lifted for Lawrence Pardo with two out in the eighth after conceding only one run. Of his 118 pitches 75 were for strikes, and he seemed to settle in as the game progressed. "I wasn't having my stuff, putting too much pressure on myself & I sort of calmed myself down and made some pitches," Herget said after the game. "It's great that the coaches are going to have trust in me." *

After barely getting to Scarlet Knights starter Rob Smorol the first time through the order, USF touched up the Rutgers ace for one run in the 4th and three more in the 5th, two via RBI singles from centerfielder James Ramsay & first baseman Jimmy Falla after Smorol was lifted with two outs for Rob Corsi. Ramsay added another RBI single in the 8th for insurance, and shared the offensive spotlight with second baseman Nik Alfonso who was a perfect 3-for-3 with two runs scored in the 9-hole.

Nick Gonzalez (3-4, 3.40 ERA) goes tomorrow for USF vs. eighth-seeded UConn at 8pm (allegedly... remember this is the Rain Delay Invitational). He'll most likely face Anthony Marzi (4-6, 4.02 ERA) who is the Huskies' #2 starter. Connecticut opened the brackets in this event pretty wide with their 3-2 defeat of #1 seed Louisville. It wasn't the only surprise on the day, as #7 Notre Dame beat #2 Seton Hall to blow wide open both pools. Both Louisville & Seton Hall will have to climb the steep losers brackets to advance to the Championship Game on Sunday, needing to win four in a row just to play for the title.

* - We have credentials for this tournament, and can actually get usable quotes from players after a game!! What a concept!! Hey USF, notice this please.

We'll be here tomorrow as well, and so will the Tiki Bar. Some sights from off the field in Clearwater below. 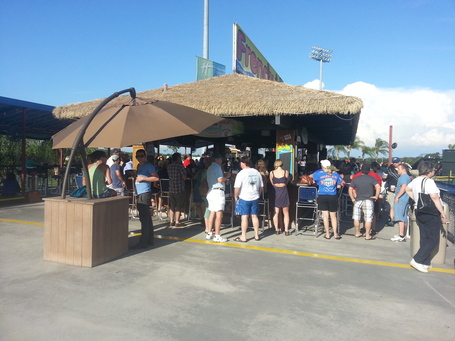 The tiki bar, Frenchy's, in left field. It's just the best. 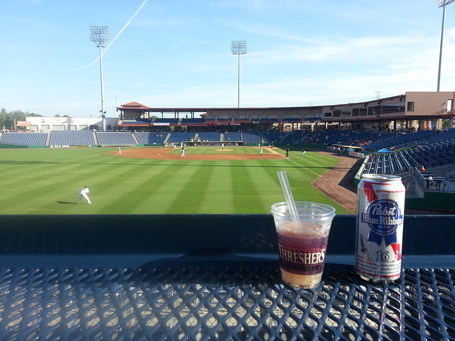 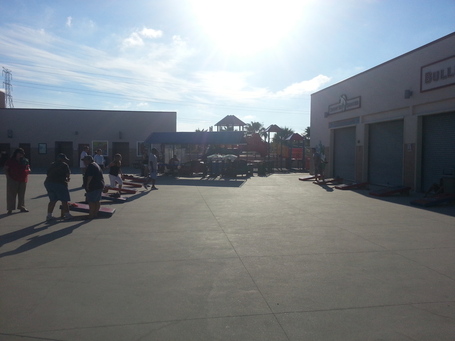 Some cornhole on the patio. 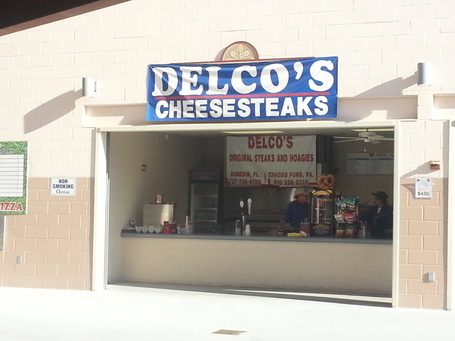 The Delco's cheese steak concession. It's so authentic you'll want to boo Andy Reid with every bite.