Why Tampa Is Awesome: Taco Bus

Share All sharing options for: Why Tampa Is Awesome: Taco Bus

Note: As a follow up to our Spirited Defense of Tampa post which did the full-viral thing and got some follow up in the Tampa Tribune, retweeted out by Mayor Buckhorn, was shared on Facebook & Twitter by thousands and thousands, and caused my email box and cell phone to absolutely explode for a few days, we've decided to launch a new series about why we love Tampa. To start, we begin with the biggest omission from the original piece. I'm still mad at myself for not mentioning this in the first place.

When writing what I originally loved about Tampa, I excluded Taco Bus for one reason: all cities have food trucks now, and trying to say how much better our best one and most famous one is than some other places is really tough to explain in just a few words. The Amazingness That Is Taco Bus really needs a deeper dive, so I attempt to rectify my original blasphemy here.

The Bus has now expanded to four permanent locations (they still have the moving trucks as well), but any Tampanian will tell you the original and best is the one on Hillsborough Avenue just off I-275. It's also the only one open 24/7/365. Oh, you need amazing Mexican at 4am on a Tuesday? The Bus has got you. My God, and how they got you. 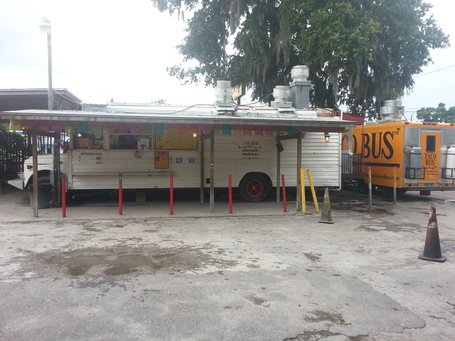 This place isn't about the pretty, folks. Taco Bus is in a lovely section of Tampa known as "The Hood," er... East Seminole Heights. Though it is well lit and feels safe, the surrounding neighborhood might not be the best place to wander late at night unless you want some crystal meth or a hooker with your burrito. I've wondered more than once "is that an engine backfiring or gunshots?" while inhaling the deliciousness before me. The Heights is one of those emerging neighborhoods that's getting slowly regentrified every day, so in 10 years we'll all look back and laugh at the Taco Bus drive-by shooting jokes. But for now it's part of the charm.

Taco Bus's motto is "Broken English, Perfectly Spoken." This is not a joke since this place is as authentic as can be, and that includes employing people with varying grasps on America's most common tongue. They WILL screw up your order unless you're clear, so if someone in your party speaks Spanish, let them order for you. Yesterday I got a nice lady that was super-fluent in both languages, but late at night that seems to be the exception. Though even if they mess it up, just eat what they give you anyway because it's still going to be incredible.

In case the weather is bad, Taco Bus does have attached indoor seating with plenty of room. But otherwise, sit outside under the covered seating and soak up the fiesta-like atmosphere: 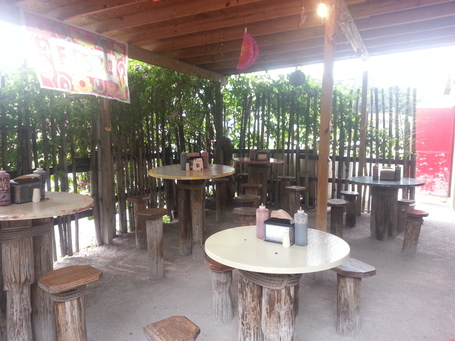 This was taken at 4pm on a Thursday. If this was 4am on a Friday, it would be absolutely packed here. The Bus at night is one of Tampa's great post-imbibing hangouts. It's by far the best 24-hour joint in the city, and the incredible food at great prices makes it a landmark. Oh, that food? Here ya go. 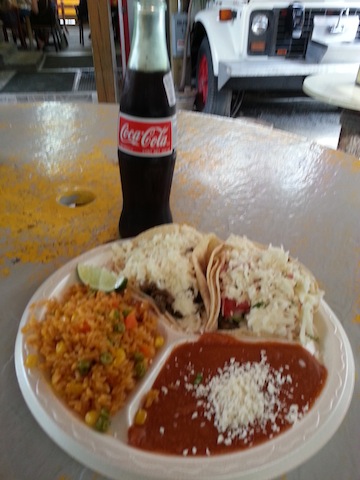 I'm normally a carne asada burrito guy, but that doesn't show up as well in a picture, so these are carne asada tacos with Mexican rice and refried beans. I don't even like refried beans, but Bus ones must contain the touch of the cherubim and seraphim since I scarf them down like I haven't eaten all week. Yes I got them with cheese, and I know real taco people consider cheese on a taco a crime... fine, cuff me, I love it. And look at all the gooey white delicious I got for merely 30 cents extra per taco. And feel free to ask for an extra lime wedge, as squeezing the fresh lime juice really brings out all the rest of the flavors magnificently. It's like the key that unlocks the tremendousness.

Also notice the Mexican Coke. You don't know about The Glory That Is A Mexican Coke? Read here.

Also notice that these tacos are so huge, they give you TWO shells! Aqui! 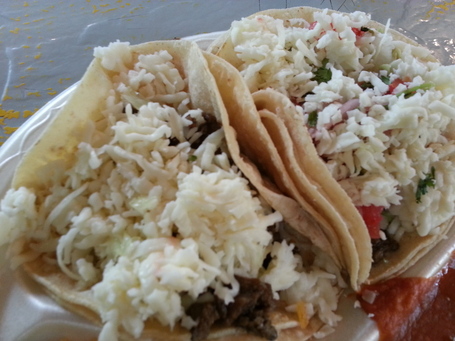 Their overfilling your burritos, tacos, quesadillas, tortas and tostatas to the point they almost (but don't quite) break has become a Tampa tradition. No matter what you get (try the barbacoa, or the pollo, or the shrimp... or one of their multitude of vegetarian options if that's your thing), it will blow your mind. Gourmet quality food that tastes like it was made in your Madre's kitchen at bargain prices available around the clock. Our beloved Taco Bus, this is why you are a shining light of our city.

Last thing: You must pick a side. 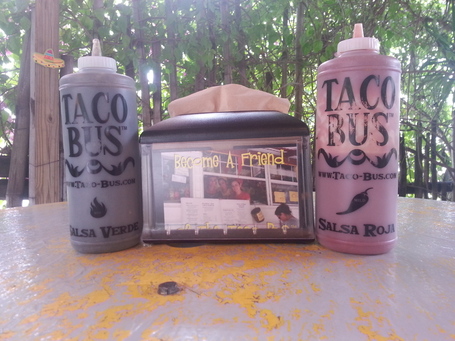 Are you Team Verde, or Team Roja? Not putting one of these on your entree is the only way you can lose here. I'm Team Roja, but I have a great deal of respect for the other side. Think of this more as an Oxford-Cambridge level of debate rather than a USF-UCF level of hatred.