Why Tampa Is Awesome: Tampa Theatre

One of the most beautiful movie theaters in the world is right in downtown Tampa.

Share All sharing options for: Why Tampa Is Awesome: Tampa Theatre

We would have gotten around to covering the Tampa Theatre in this series eventually. I want to think that we would have, anyway. It's one of my favorite places in Tampa, and one I wish I had frequented a lot more before I moved away.

What really reminded us that we had to include it in the "Why Tampa Is Awesome" series was this article about some of the world's best movie theaters on The Credits, a Web site run by the Motion Picture Association of America. They only found a spot for two American theaters on the list... and one was the Tampa Theatre. It's an absolute treasure. 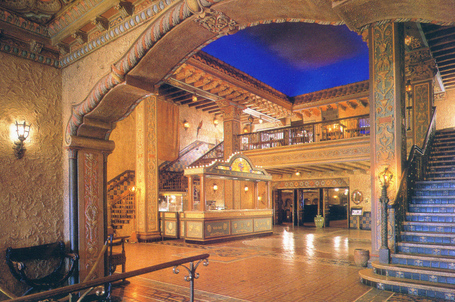 Opened in 1926, the Tampa Theatre was the height of opulence in its day. In 2013, it still is. As soon as you buy your ticket and walk inside, you're transported into a Mediterranean courtyard, with brightly-colored tile everywhere, elaborate columns, a terra cotta "roof", and a look up to a starry night sky. You can go inside to sit in one of the floor-level seats, but you should really climb the stairs and sit in the balcony to take in the incredible surroundings. It's also the best place to see a movie - the giant screen is practically at eye level. 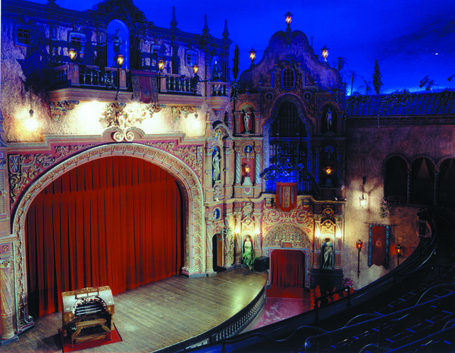 Get there early. While you admire the amazing sculptures, gargoyles, balconies, and another starry sky, all blended together win French, Spanish, and Italian styles, there's another treat in store for you. About 20 minutes before the show begins, the Mighty Wurlitzer organ rises up from underneath the stage floor, and a volunteer organist plays the same music that they would have played back in the days of silent films. (In fact, the first movie the Tampa Theatre ever showed was a silent film.)

In a very forward-thinking move, the city rallied to preserve the Tampa Theatre in the 1970s, when downtowns across America were shriveling up and the multiplex began taking over as the dominant moviegoing experience. The Tampa Theatre Foundation now runs the facility, and the Theatre is on the National Register of Historic Places.

Even if the Tampa Theatre wasn't so beautiful, it would still have great value to me as Tampa's only arthouse movie venue. As someone who hurts himself rolling his eyes at the loud, clunky summer blockbusters, and who was possibly the only blogger on SB Nation who couldn't have cared less about "Fast & Furious 6", the Tampa Theatre is like an oasis. ("Frances Ha" starts there today. I saw it last weekend and enjoyed it, even if the theme of growing past your college years and into adulthood hit a little too close to home.) There are also screenings of classic movies on Sunday afternoons all summer long.

The Tampa Theatre is located at 711 N. Franklin St. in downtown Tampa. The Theatre generates the majority of its income from ticket sales, but it also needs the support of members, volunteers, and benefactors to keep it going. If you'd like to donate or assist the Theatre in any way, visit TampaTheatre.org and check the options in the Support menu.

There's a number of YouTube videos out there about the Tampa Theatre, including a few about the Theatre allegedly being haunted.