We knew some roster turnover was coming, but if this is it that's not bad

Whenever a new coach takes over there's going to be some roster turnover. Certain players will want to take the opportunity to head elsewhere, while others just might not like the new system.

With the signing of Dinero Mercurius of Faith Baptist in Brandon (and previously University in Orlando), the Bulls get a three-point guy that rumor has it can shoot from anywhere. He's a three-star recruit according to 247sports.com, but there's no film of him on Youtube anywhere except a warmup dunk and a blocked shot in this "mixtape" here.

We have no idea how good this kid is or isn't, but if he's a true marksman obviously that's what the Bulls need because yeah this is the final D1 three-point percentage chart from last year: 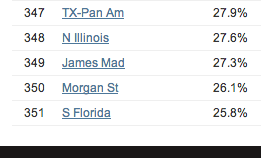 Dead last in America. And not just in D1, but possibly in ALL NCAA divisions. The lowest the NCAA has listed is D2's Georgian Court at 26.6 and D3's St. Joseph's Long Island at 25.9, but the NCAA doesn't even report the stat unless you make five per game. I point this out only to show how truly abysmal the Bulls were from long range. Since they were historically bad last year, just getting to somewhere between terrible and sub-mediocre would clearly mean more wins in 2014-15.

Between Mercurius and Troy Holston, it seems likely at least one of these freshman wings is going to get some burn right away. But that will also depend on how Orlando Antigua delegates the three new scholarships he has available.

Zach LeDay, Javonte Hawkins, and Musa Abdul-Aleem are all leaving USF. We're not sure where yet, but they all won't be here next year. Thanks to all of them for their time in green and gold, and we all hope they can land in a system that can help exploit their talents more than they were here in Tampa. Also a special shoutout to Abdul-Aleem who graduated in December and will always be a Bull for his degree. Here are the final stats on all three players:

To this point, all three were basically replacement-level players in AAC college basketball. This opens up three scholarships for the new coaching staff to use on players that might fit their system better, and they might not even use all three this season and wait for a full recruiting period before making offers. It's not that losing players is ever a good thing, but in this case it's probably as non-harmful as can be and might even be a positive in the long term.

If the defections stop here, it's certainly a blow USF can handle. But if other more experienced and talented players start moving too, then we could be looking at a long 2014-15 season.