Depth Chart Is Out! Ten Freshmen Crack The Two Deep

Share All sharing options for: Depth Chart Is Out! Ten Freshmen Crack The Two Deep

Our first impressions below. A total of 10 freshman (five true, five redshirt) cracked the two-deep on both sides of the ball.

It's listed as a 3-4 instead of the 4-3 we got in the previous iteration. Three down linemen (Eric Lee and Elkino Watson at DT, Todd Chandler at the nose), but four linebackers:

Joey Knight tweeted it earlier today, but Chris Dunkley will start at cornerback. He's also #1 on both kickoff and punt returns. Looks like we'll see a lot of the previously embattled senior this season.

Jimmy Bayes not listed. Is he redshirting at a position of depth for the Bulls this year?

Redshirt freshman Kennard Swanson gets the nod at fullback. He's the only freshman starter on offense, and one of two in total (Sanchez).

Darius Tice over Marlon Mack at halfback.... for now. How long does that last?

Sean Price technically over the (recovering from a not-so-serious knee injury) Mike McFarland at tight end, but expect to see both of them on the field at the same time.

Marvin Kloss and Mattias Ciabatti at kicker & punter because of course. Every Kloss kick will be important to get him back to Orlando as a finalist list for the Groza Award again in 2014.

These are just the first impressions, and we're about to go do a podcast where we can break this down in more detail. But fire away fans... what are your thoughts?

Opening Depth Chart 2014 in full is here. Screenshot of O & D is below: 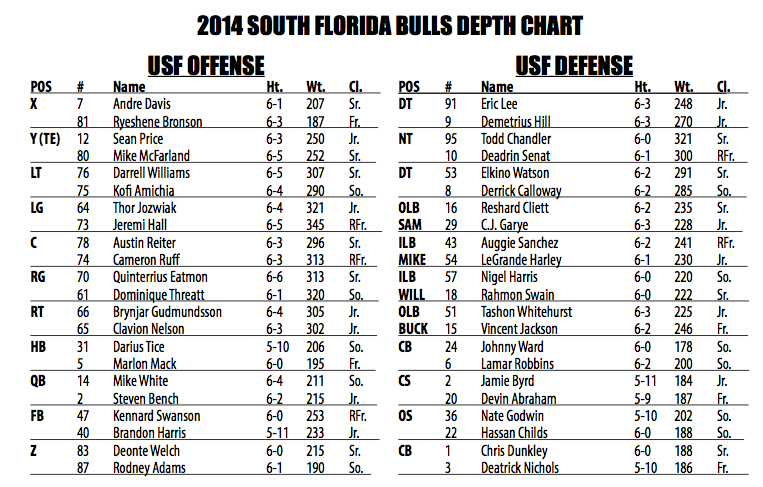