What: A football game between two rebuilding teams

Injuries: For the Bulls, Thor Jozwiak is out with a shoulder injury as well as turf toe. Andre Davis is day-to-day with a bruised sternum. Mike White is listed as "probable" on gold sheets nationwide. If we had to guess, we think we'll see #14 under center on the first play for the Bulls... which is pretty amazing since Coach T declared him out in his post game press conference last Saturday.

For the Wolfpack, only three linebackers are listed as out indefinitely: Coult Culler, Ty Linton, & M.J. Salahuddin.

Backing The Pack on N.C. State with Voodoo Five. 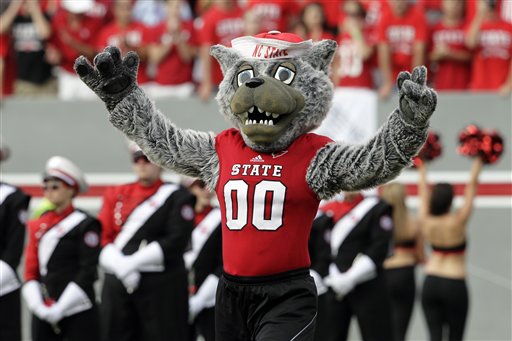 * For N.C. State, they'll need to stop Marlon Mack and the running game, but can they? The Wolfpack have allowed 345 yards after contact so far this season, which is second in the nation. It's a big factor in giving 471 yards a game, good for 103rd nationally, despite only playing Georgia Southern and Old Dominion.

* Mike White was 9-26 for 181 yards with an INT, and was just 1-1 for 12 yards before the wrist injury that sidelined him against Maryland on the first play. The Bulls offense looked inefficient against last week with Steven Bench, as USF was unable to create any points off of six turnovers (exempting a defensive scoop-and-score). With an offense moving the ball just 3.4 yards per play, the Bulls will need to be more efficient. Since N.C. State is allowing 6.2 yards per play, there might be an opportunity.

* USF's defense is only allowing 4.5 yards per play, and ranks 28th in the country at just 317 yards allowed per contest. That's pretty good, but they'll face the best offense they've seen in 2014 on Saturday. N.C. State is 28th in the nation in offensive yards per game, and their 6.6 yards per game average is strong. It should be a fair test for both sides.