USF Needs to Keep Mike White in the Pocket

A film study of Mike White's strengths and weaknesses as a passer, and what the Bulls can do to adjust.

Share All sharing options for: USF Needs to Keep Mike White in the Pocket

All in all, Willie Taggart and Paul Wulff called a pretty solid game against Wisconsin. Their offensive gameplan was similar to what they did against Maryland--they knew that if the Badgers knew they were running the ball, they weren't going to succeed (evidence: the Bulls' three runs-and-out after Melvin Gordon's first touchdown, where Marlon Mack was stuffed on third and short). So they mixed things up, and passed frequently on running downs and rolled Mike White out of the pocket quite a bit on passes. This works to two different purposes: it keeps Wisconsin guessing as to when the run is coming, and takes some of the pass rush off White.

This worked reasonably well against the Badgers, just like it worked reasonably well for Steven Bench against Maryland. Bench and White are drastically different quarterbacks, though-- White has a much stronger arm and is better at reading defenses, but Bench is more mobile and is better at throwing on the run. In fact, the disparity in White's success throwing in the pocket vs. out of the pocket is so large that at this point, rolling him out-- a key part of Taggart's offense--hasn't been worth it. Take a look at the splits from the Wisconsin game:

Drops are part of the game, of course, but those were two fairly important drops: the ball that bounced off Deonte Welch's chest and led to an interception, and Rodney Adams whiffing on a beautiful deep ball where he may or may not have been interfered with. So, if you like, White's numbers from the pocket with the drops factored in as catches would have been ~10/12 for 220 yards. Pretty great numbers!

Obviously these stats are going to be a little skewed-- it's hard to find a quarterback that isn't better at throwing in the pocket, and a lot of throws outside the pocket are a result of the QB fleeing defensive pressure. But that disparity is pretty ridiculous, and it's not a new thing for White. His incompletions outside the pocket aren't a result of escaping the rush and throwing the ball away, either: a lot of them come on simple rollouts where he doesn't set his feet properly and delivers a bad pass. Let's dive in further. 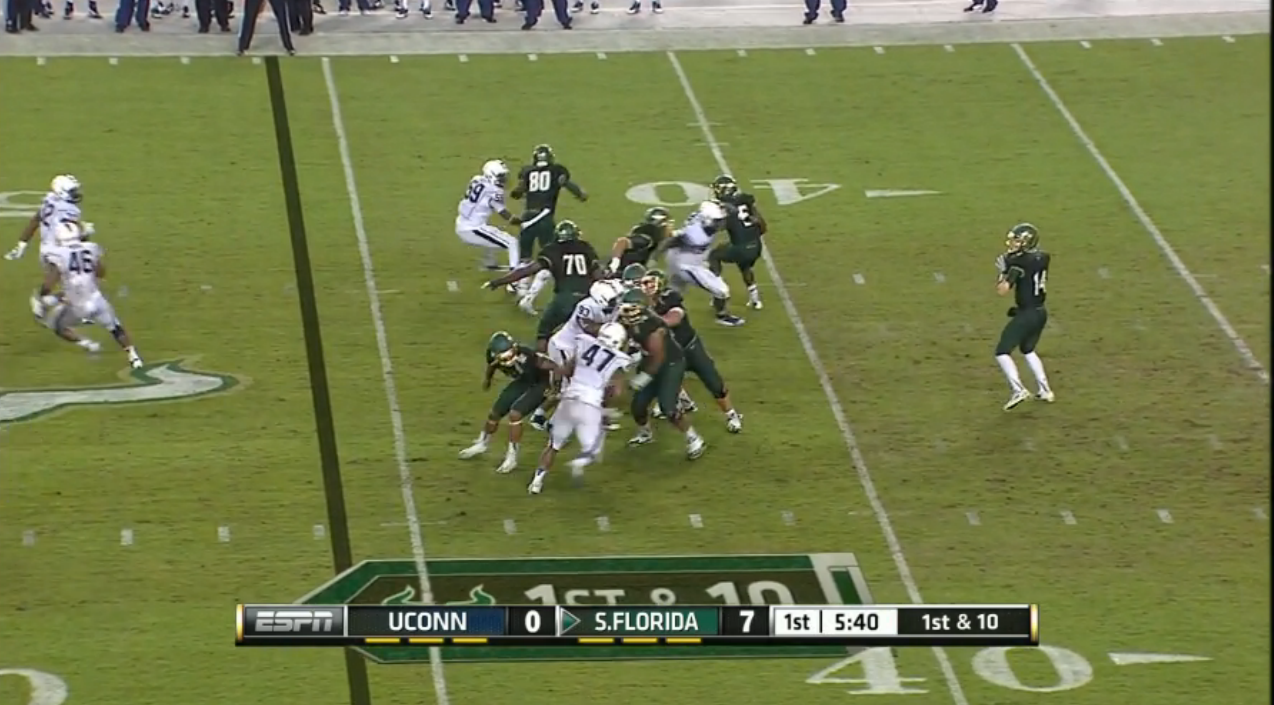 If there's one thing that can be said for Mike White, he has tremendous pocket presence. Here's a play from the Bulls' second drive against UConn, where White is waiting on Rodney Adams to work his way over to the left side of the field on a deep cross. The protection isn't ideal: UConn's rushing four guys against seven Bulls, but some confusion on the right side between Quinterrius Eatmon and Thor Jozwiak lets a Husky lineman into the backfield, and Marlon Mack fails to pick him up. If White stands his ground in the pocket and waits for the route to develop, he's going to get whacked. 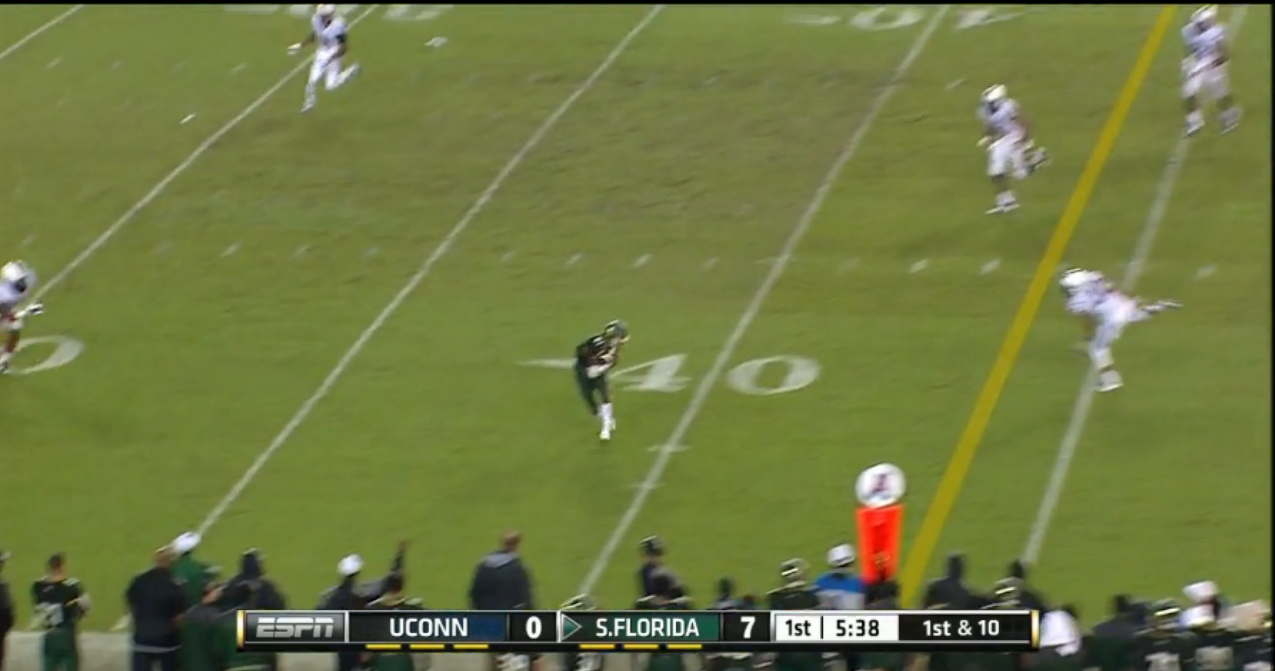 And he does! The camera doesn't pick it up, but White steps into his throw, absorbs the hit and delivers a great pass to Adams. Adams is wide open, but the throw isn't as easy as it looks-- White has to put enough touch on the ball to fit it over a leaping Andrew Adams, the UConn defender who was covering the route down low. A lesser quarterback might have shied away from the hit, but Mike delivers the ball between the numbers.

Here's another example of him working the pocket well against UConn. 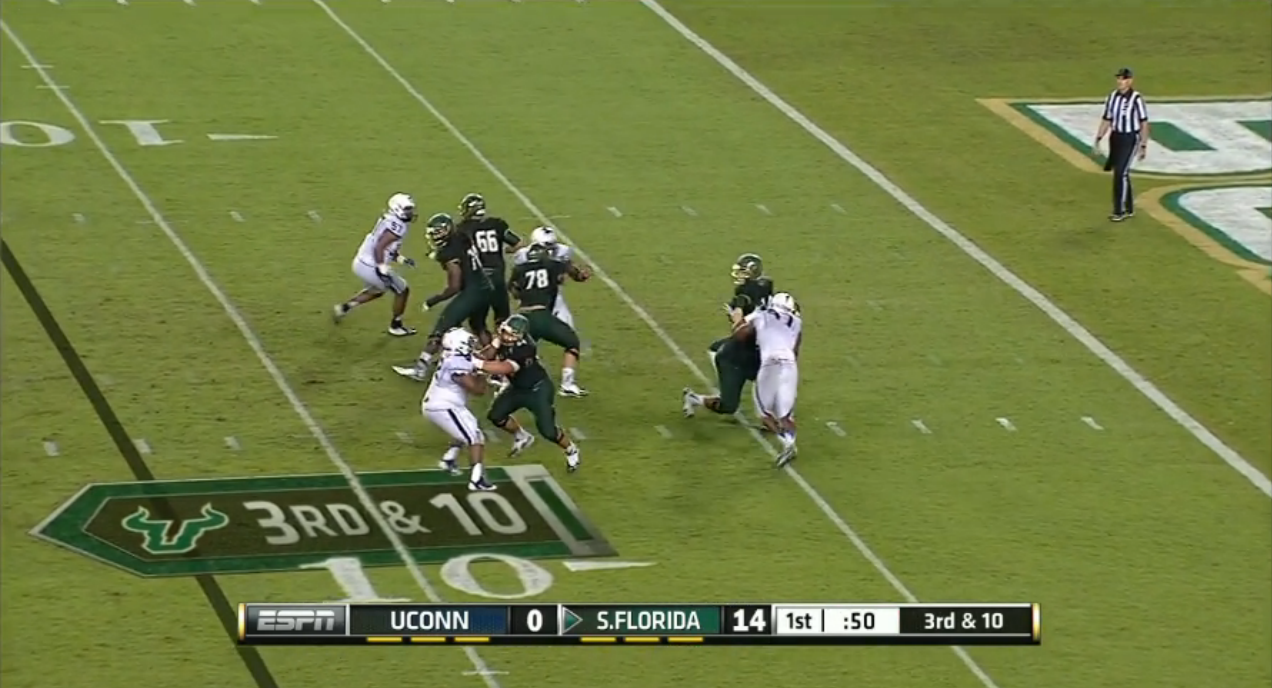 The protection is about to collapse (note: the offensive line did a really nice job in pass protection the past two weeks; I'm just picking on them here to focus on White), as Austin Reiter is beat and Darrell Williams is literally getting shoved into White's backside. This is third down deep in the Bulls' territory, so forcing a throw or taking a sack would not be good. 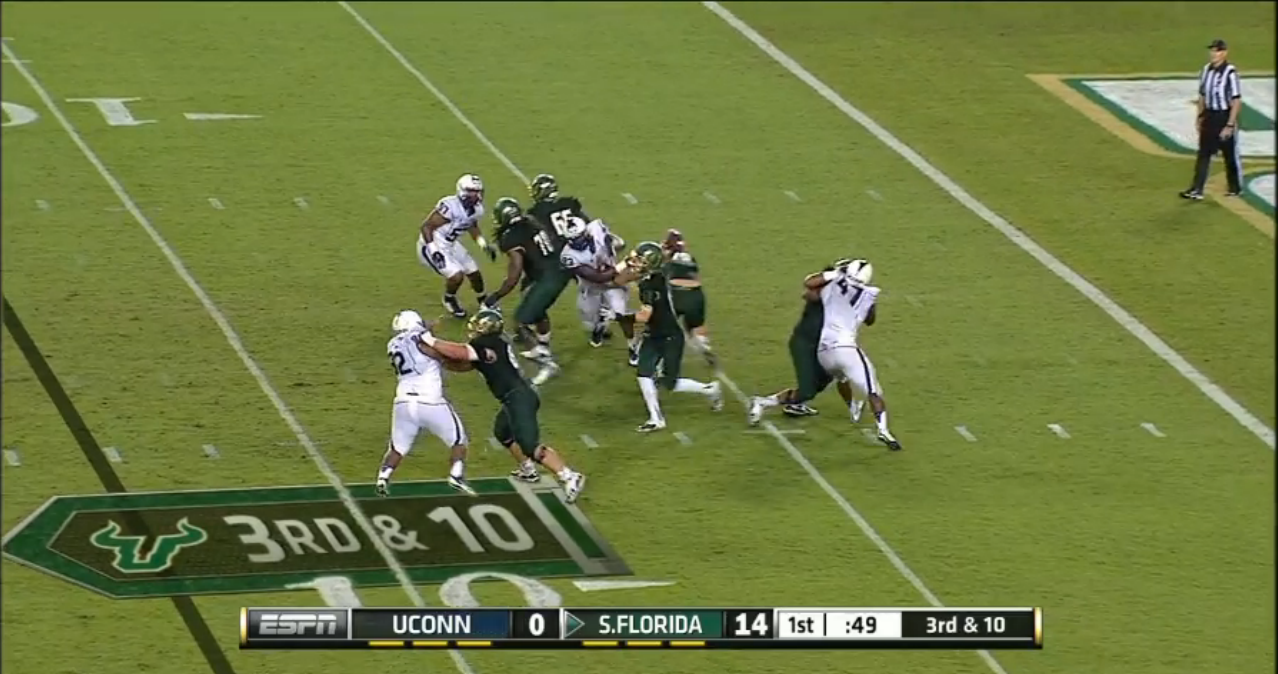 White makes a really nice play here-- he feels the ends collapsing on him and steps up in the pocket, giving himself some space to dump the ball off to Marlon Mack in the open field. This is a good, safe throw that demonstrates his pocket awareness. He avoids the sack and doesn't force the ball into any corners. 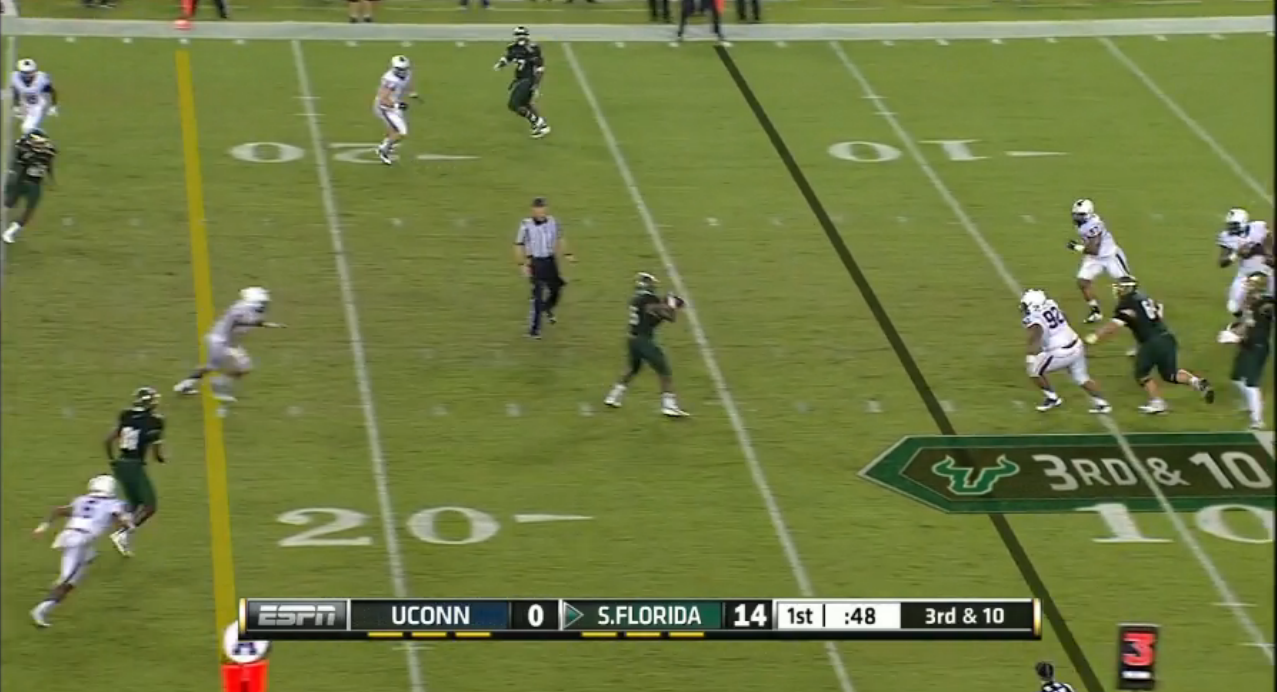 Voila! Mack catches the ball in space and has room to maneuver for a first down.
Let's take a look at one more of White's better throws in the pocket before we move on to him on the run. This one's against a much better defense. 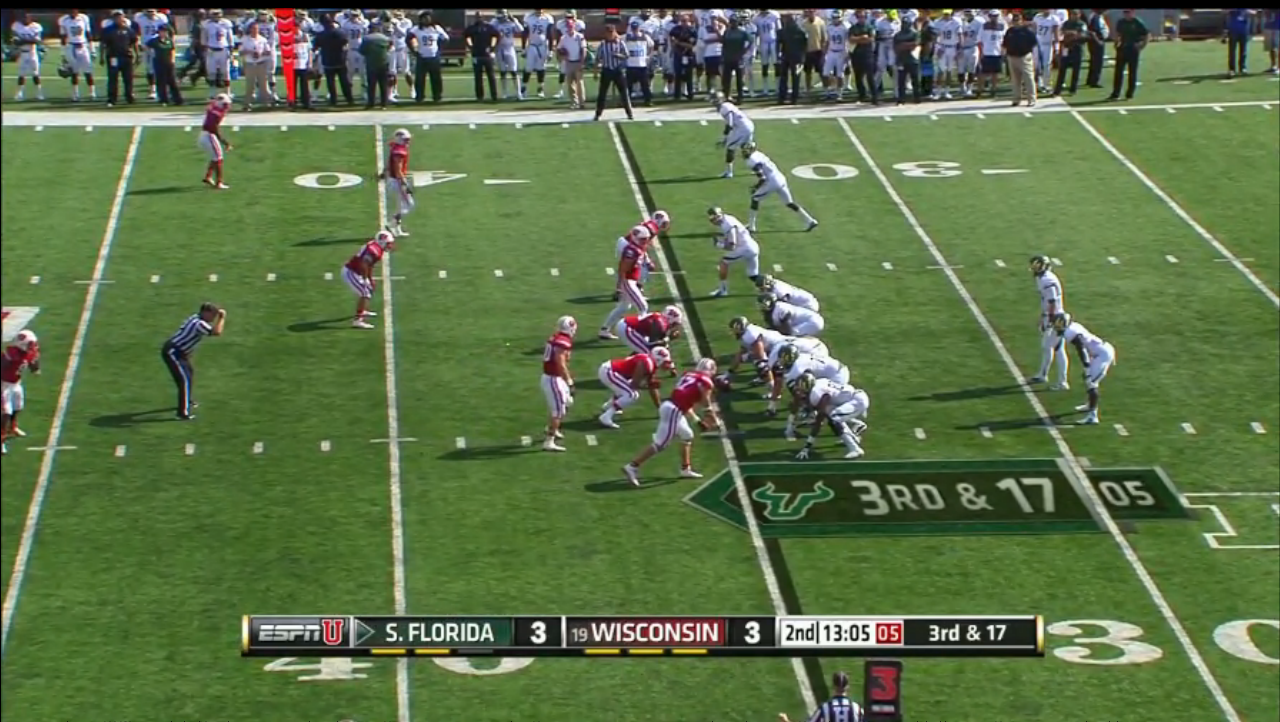 You may have recognized this play already, and if so, I'm sorry in advance. The Bulls are faced with 3rd and 17 and are lining up Rodney Adams, Deonte Welch and Alex Mut along the right side along with Mike McFarland on the line. They're going to try to pick up this first down. The Badgers, accordingly, have their ears pinned back and are showing pressure. 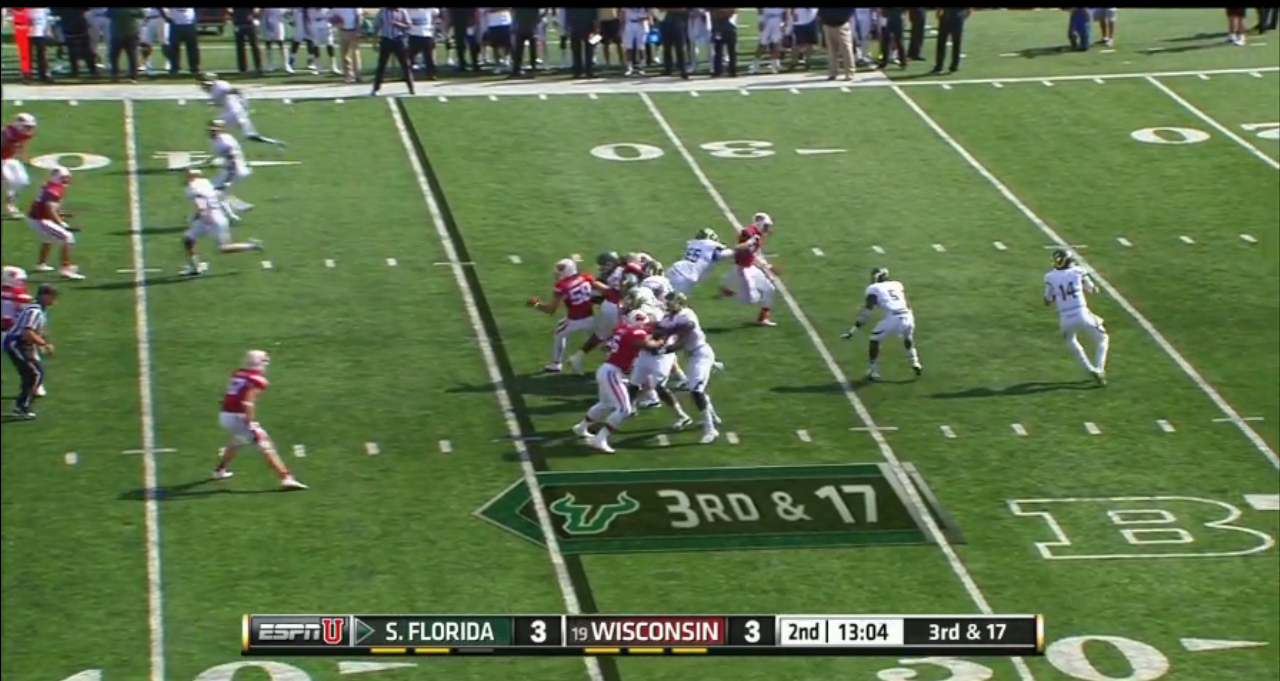 The protection is fine here. Brynjar Gudmunsson gets beaten badly on the right side, but Marlon Mack is there to pick up his defender. The three receivers on the right are all about to split off-- Mut is going to go deep to draw the safeties back as a decoy, Adams is going to curl short as a safety valve to try to draw the linebackers in, and Welch is going to settle in the resulting soft spot just beyond the first down line. This is White's primary read. 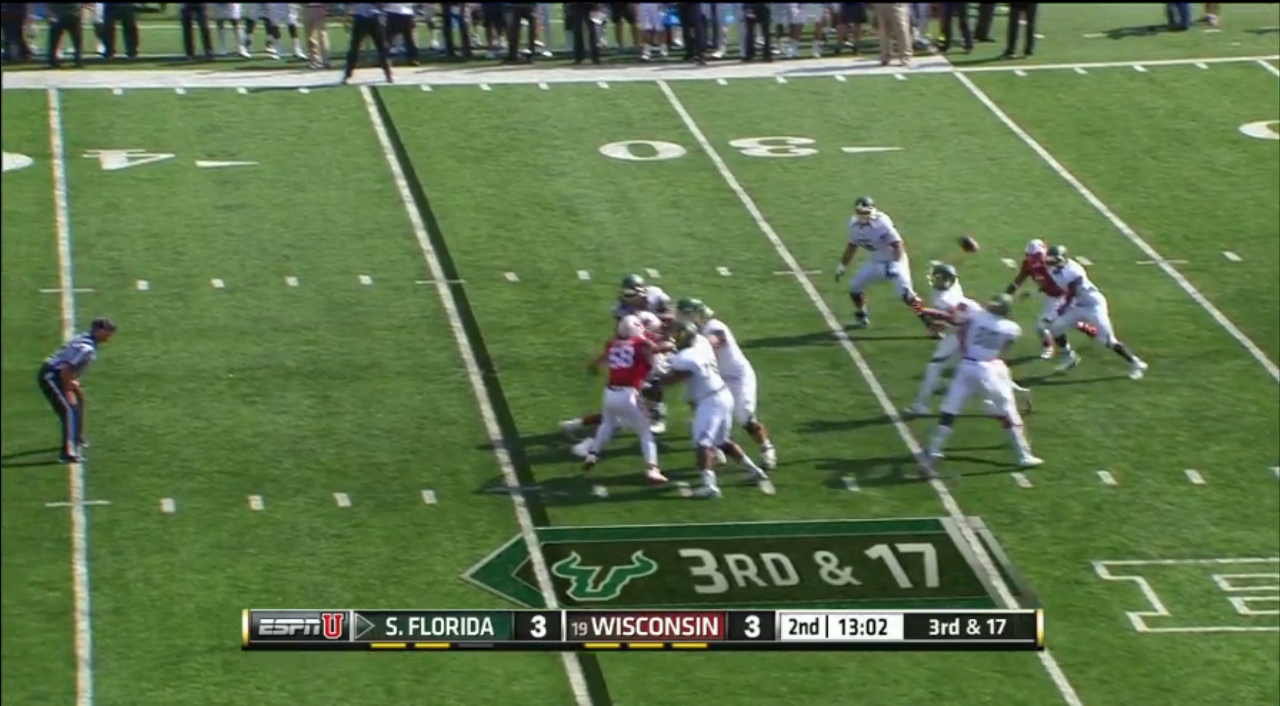 McFarland gets beat on the left side and puts his quarterback under a bit of duress, but White doesn't get spooked, keeps his feet set and delivers one of his best throws of the day. 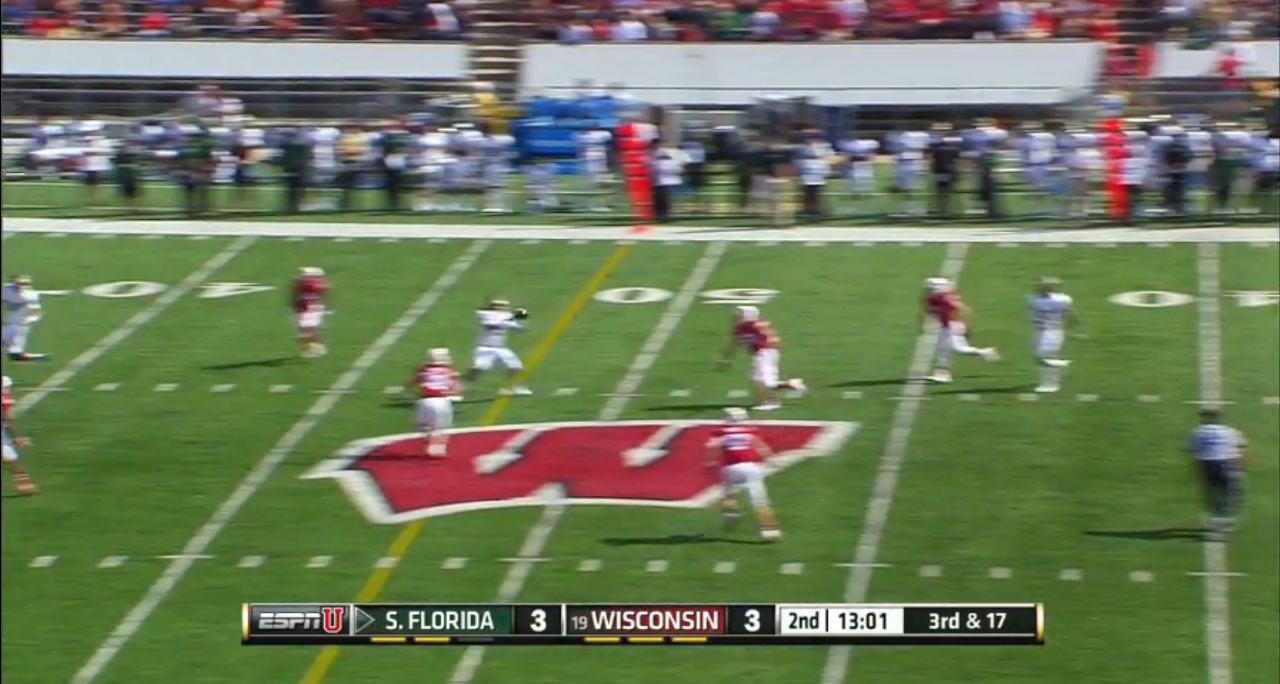 This is a perfect pass. It's got enough touch to clear the first line of defense, but it gets to Welch before the defense can and hits him square in the numbers. Alas, Welch can't bring it in and the result is a Wisconsin interception. But White did his job here.
Now let's see how he does when he's on the move. 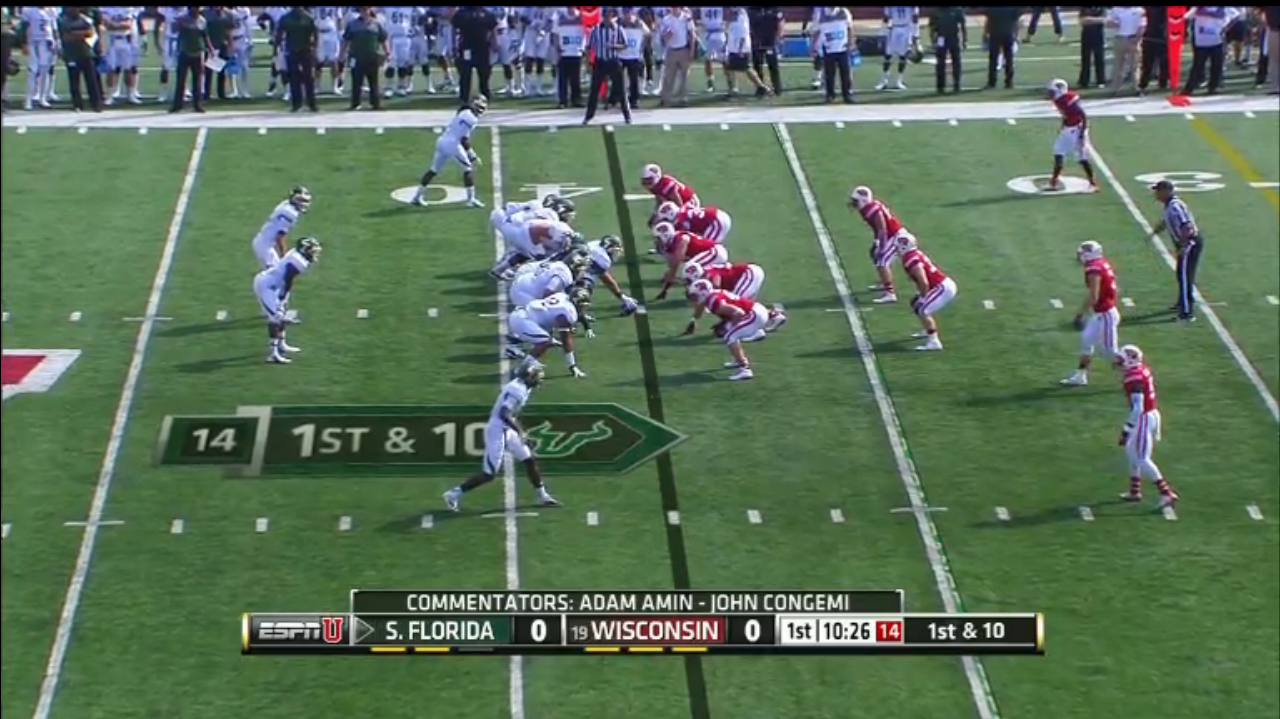 USF's got the ball in Wisconsin territory after a nice run by Marlon Mack. They're going to try keep the Badgers off balance with a pass on first and 10 here. Deonte Welch is wide left, with Ryeshene Bronson split out right and both McFarland and Sean Price on the line. 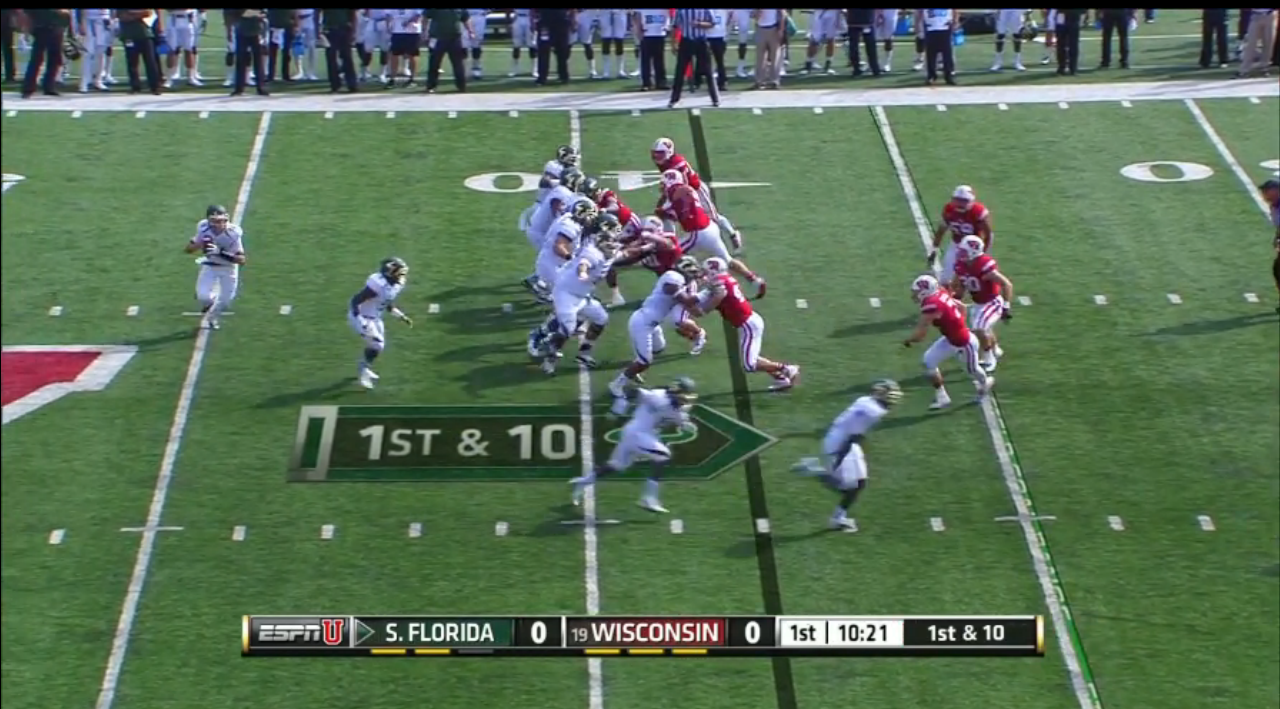 Very simple play here. Welch goes in motion to the right side pre-snap-- he's the receiver still behind the line of scrimmage, with Bronson ahead of him. Welch is going to camp out in the flat, while Bronson will be a few yards deeper beyond the first down line. White is rolling out to his right, essentially chopping the field in half and creating a very easy read for him between his short and deep receivers. 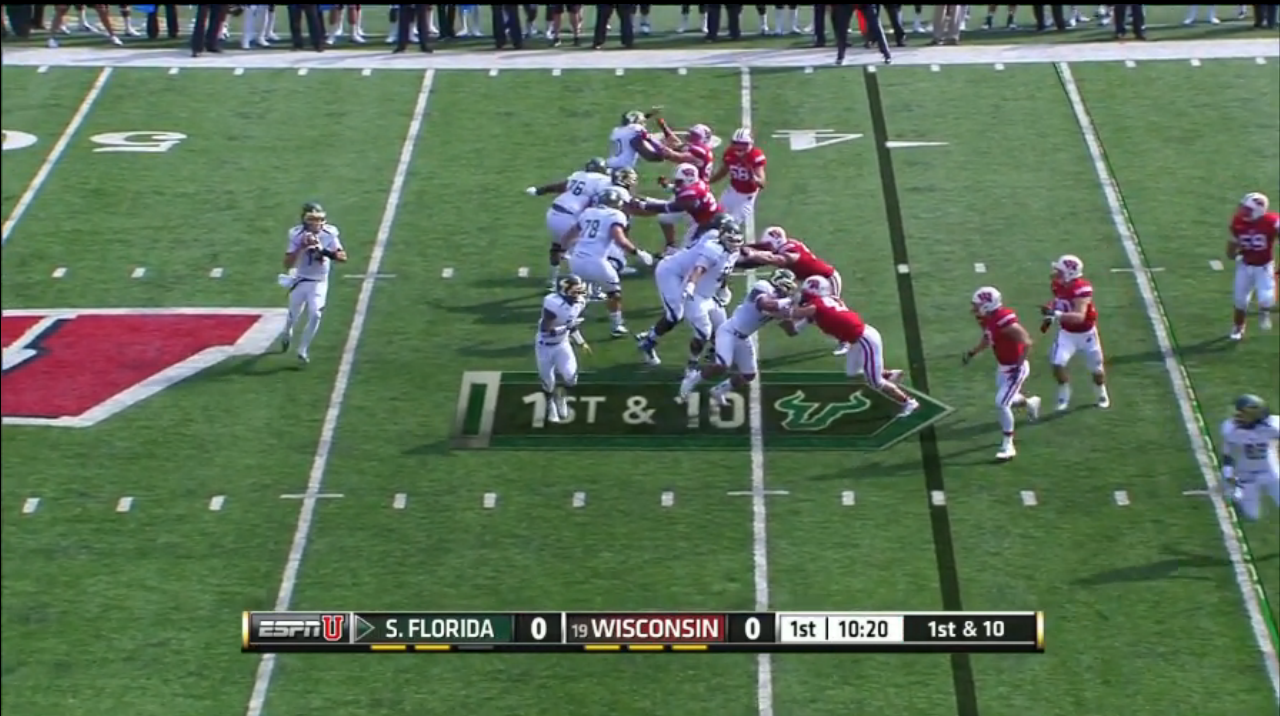 Look, Deonte is wide open! The line is doing a great job of picking up the Badgers' rush, too. All White has to do is set his feet and make an easy throw... 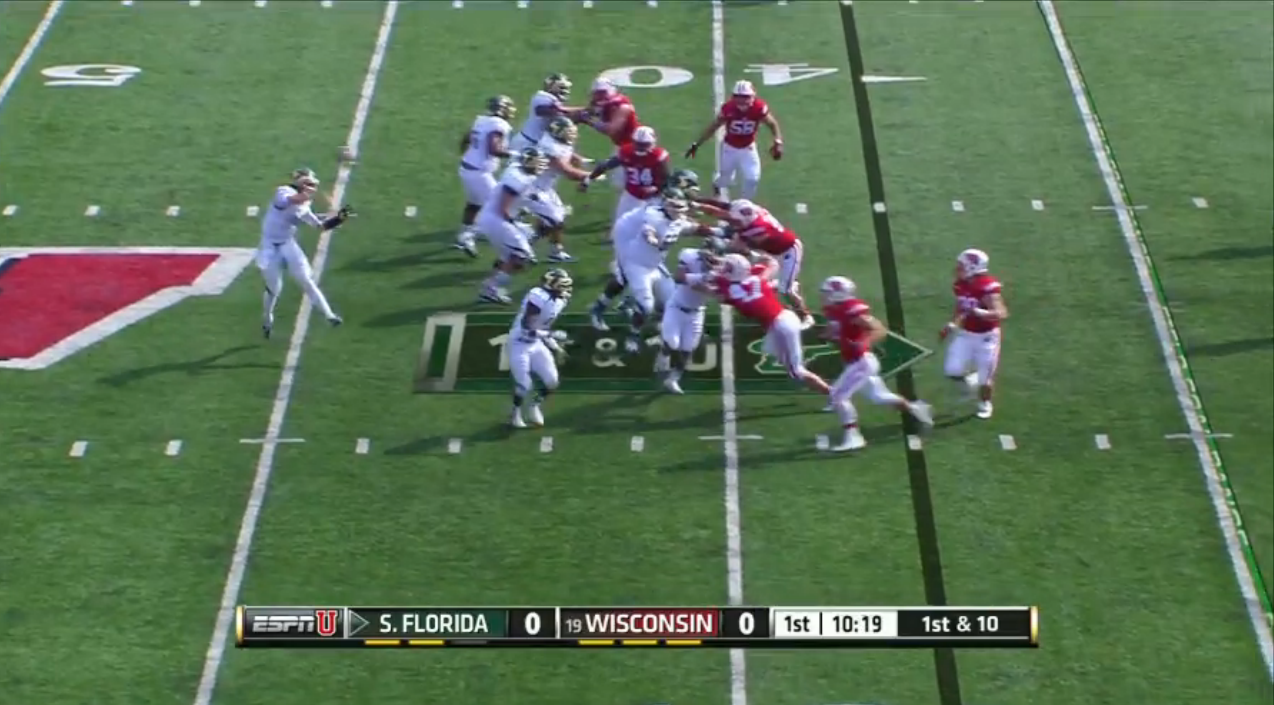 Mike, you look like a jumping bean. There's no pressure to be seen here, but White doesn't set his feet and rushes the throw. 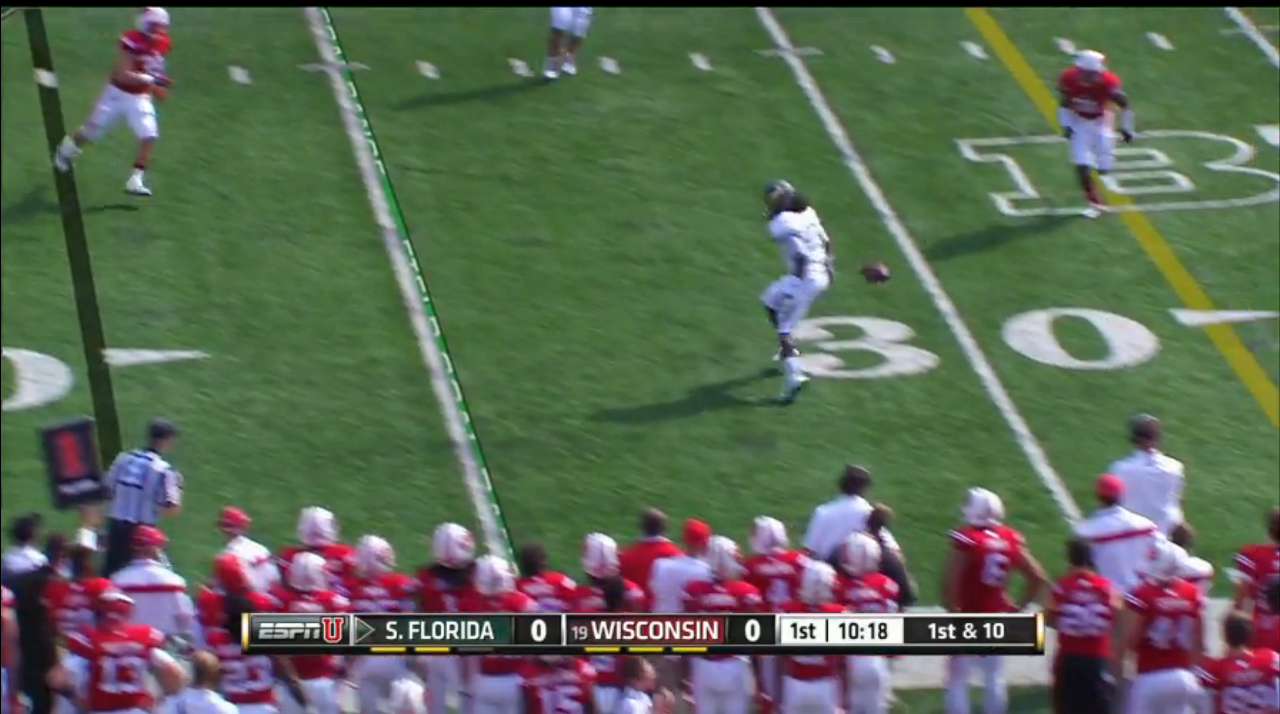 ... and the ball lands at Welch's feet. Here the announcer comments "you can't miss throws like that against Wisconsin," and he's right.
This is a problem for White. As good as he is in the pocket, he's struggling to get his bearings on simple rollouts. These rollouts are plays that Taggart and Wullf clearly want to call, too--not only do they chop the field in half and make for easier reads for their young quarterback, but they force the defense to respect the edge and not just blow up the pocket on every play.
So how do you solve this problem? Clearly this is something White needs to work on-- there's no reason why he can't learn to set his feet when outside the pocket and become a much more effective passer as a result. In the meantime, however, Taggart needs to tailor his play calls to his quarterback's skill set, and there are ways to do that without becoming predictable and calling straight drop-backs every play. Check out this example from the Wisconsin game. 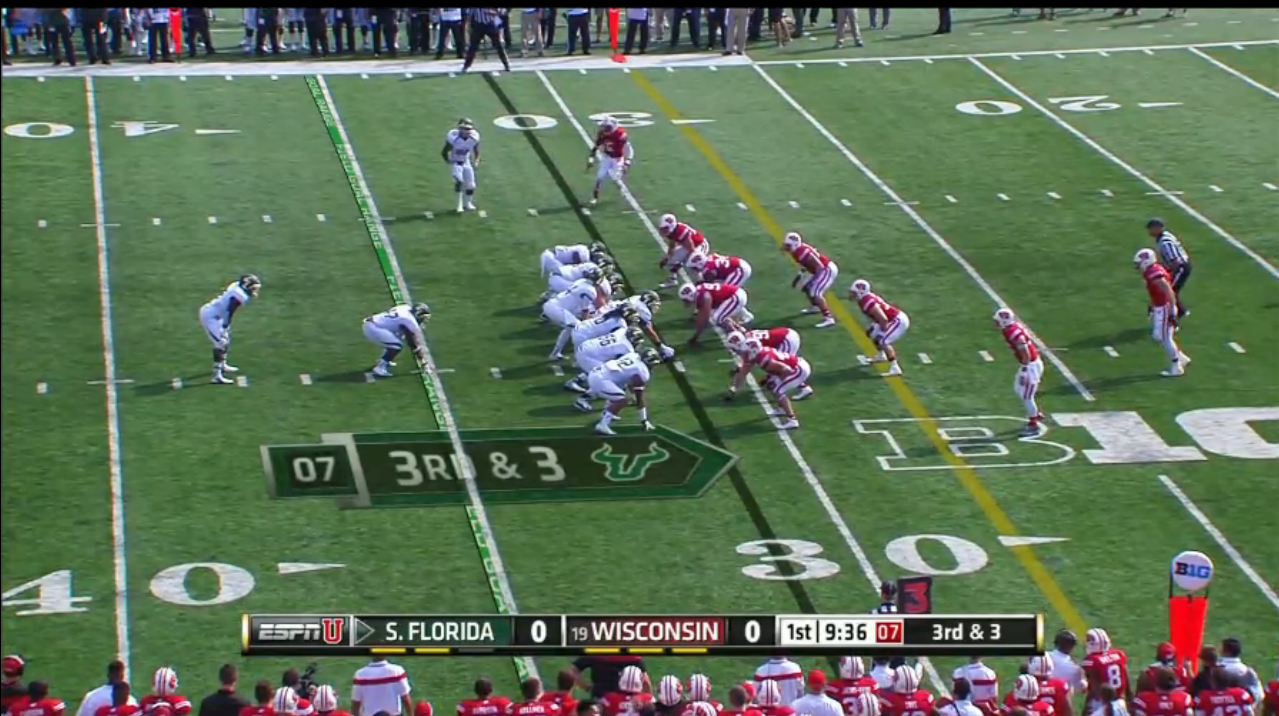 It's a crucial third and short on the edge of Marvin Kloss' range, and the Bulls are lined up in a running formation. Price and McFarland are on the line, Kennard Swanson is in the backfield, and the man out wide, Jordan Duval, is not exactly a noted receiving threat. The Badgers recognize this, and are sneaking up to the line to try to stop the run. 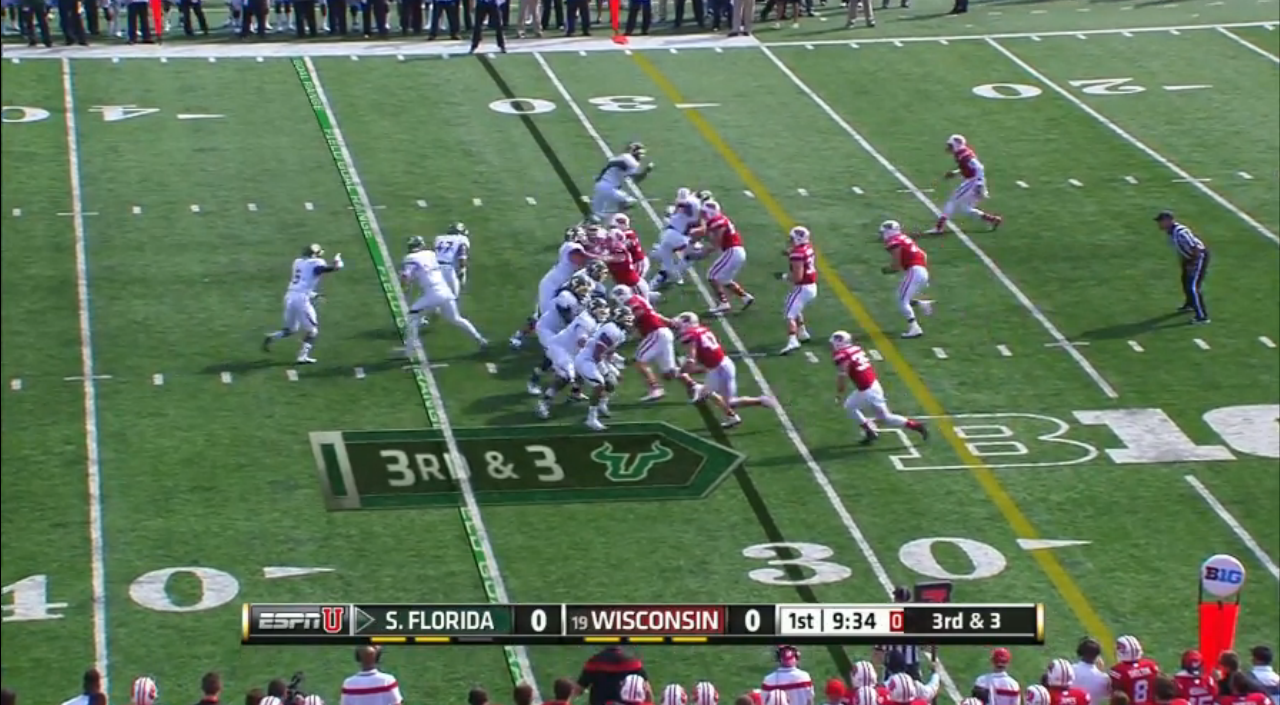 Surprise! It's a fake to Mack, although the Badgers haven't quite realized this yet. McFarland fakes a block and draws the defenders deep with Duval, while Kennard Swanson sneaks into the flat. The Bulls ran variations of this play several times on Saturday, and almost all of them were successful. 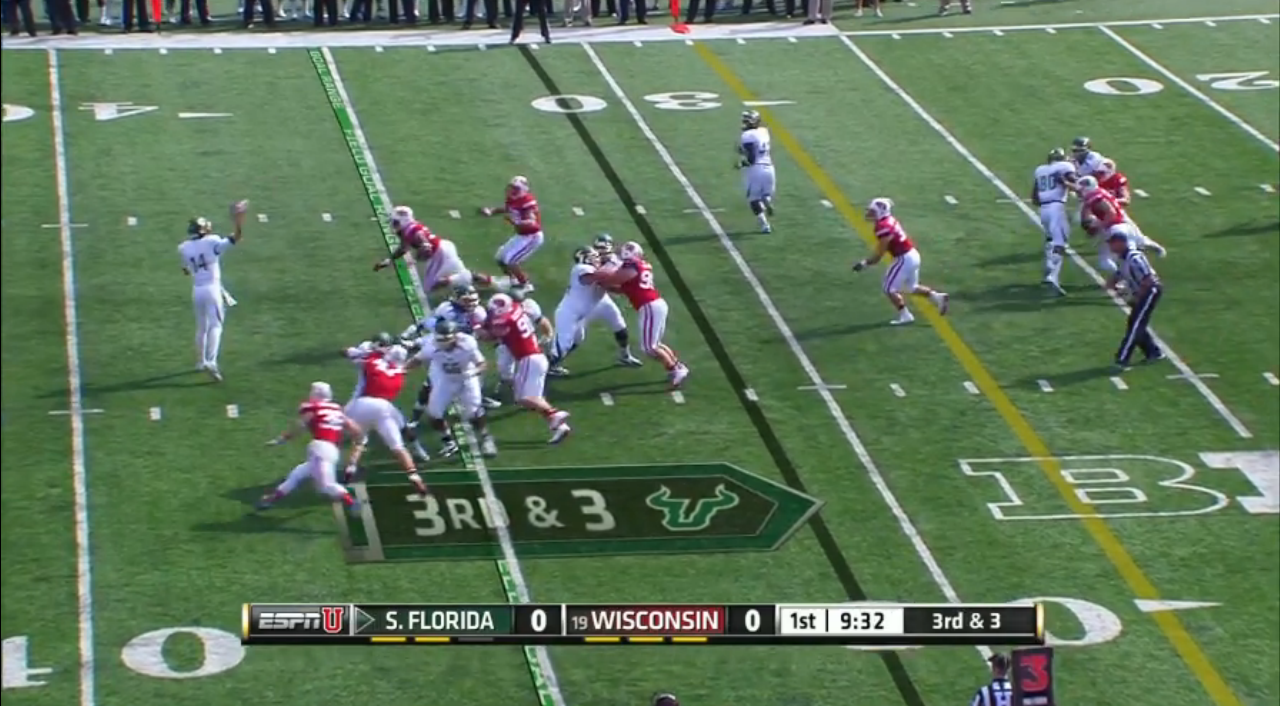 It worked! Swanson is wide open. A quarterback like B.J. Daniels might have rolled out left here as a run-pass option, but Mike White remains firmly planted in the pocket. Even with the Wisconsin pass rush bearing down on him, White stands his ground and delivers a perfect pass to his fullback. This is essentially a typical third-down rollout play without the rollout. 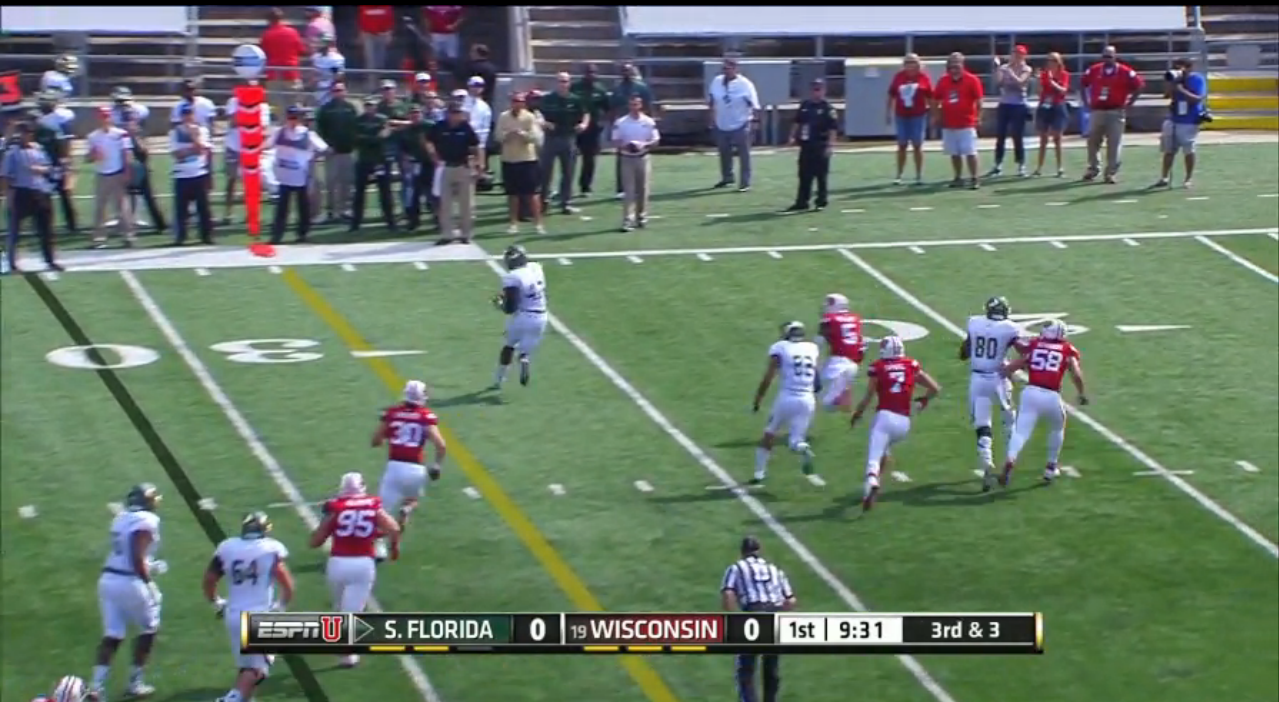 Swanson catches the ball in stride and rumbles upfield for a gain of 22.
These are the kind of plays we need to see more of until White becomes more comfortable throwing on the run. A screen serves the same purpose here-- something that allows a back or receiver to get into open field in the flat, creating an easy throw for the quarterback without even leaving the pocket.
This might be the kind of spot where Quinton Flowers could be useful, too. Taggart's decision not to play his freshman quarterback in the last couple games is a wise one-- a young QB's confidence is easily shattered, and following a one-completion, two-interception performance against NC State with a game in a near-monsoon or against the toughest defense on the schedule would not be a smart idea. But perhaps the more mobile Flowers can be used to stretch defenses on choice plays, getting out on the edge with an option in the flat, allowing him to build his confidence through easy throws that aren't quite as easy for Mike White.
Of course, if we're ever to see Willie Taggart's offense run to its full potential, Mike White has to learn to make these throws on the run. He's still young-- there's plenty of time for him to develop as a passer as long as they're drilling this in practice. In the meantime, the play calling must play to his strengths and take into account his deficiencies.