Can this redshirt freshman make the strides necessary to bounce back from a shoulder injury that sidelined the Madison, Alabama native for the 2014 season?

Share All sharing options for: Only Nick Holman Days Until USF Football

Stats in 2014: Redshirt season and missed most of the 2014 season after initially injuring his shoulder in fall camp. Holman underwent surgery to repair his torn labrum, initially injured at open practice last August.

Spot on Spring Depth Chart: Nick Holman is not listed on the 2015 spring depth chart, and with standouts like 6’0, 220-pound junior Nigel Harris and 6’2, 241-pound sophomore Auggie Sanchez it’s no surprise.

How He Came to USF: A three-star prospect from Madison, Ala., Holman tallied 104 tackles and three sacks as a senior at Bob Jones High, helping his team to a school record mark of 11-2. The Patriot team captain pulled the trigger to become a Bull fresh off an official visit to Raymond James Stadium for the 2013 matchup against the Miami Hurricanes. Holman was named first-team all-region and to the Huntsville Times Elite team on top of being named MVP linebacker at the VTO Alabama Rivals showcase. 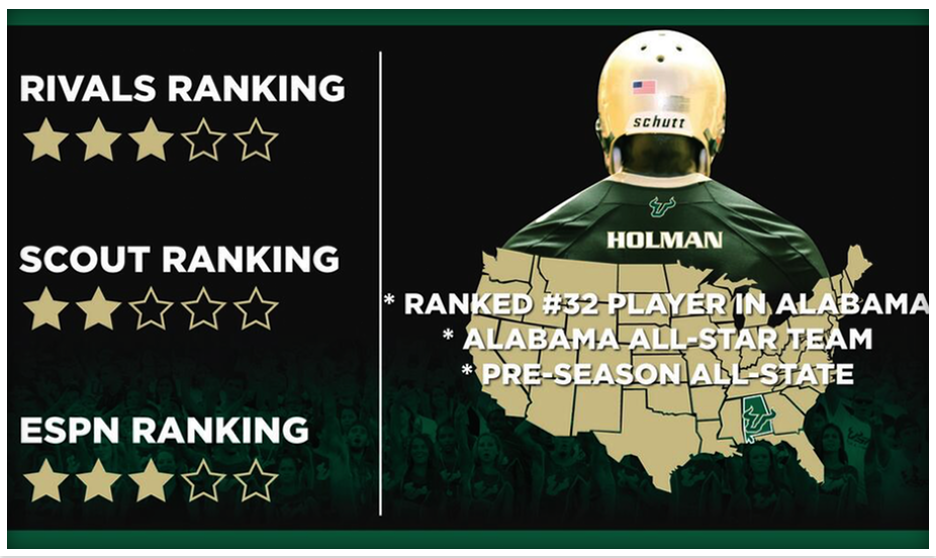 Projected Playing Time: Holman should see some action in 2015, but it will be challenging with standouts Nigel Harris, Auggie Sanchez and Tashon Whitehurst. Holman is still developing as a middle linebacker after playing defensive line his first two years of high school. Holman is a very intuitive linebacker with a great IQ, he should see the field in the 2015.

Stampeding Through the 2015 USF Football Roster