(Author's Note: We would have been happy to let this position paper wait for awhile. Or forever, for that matter. But I want to write something about USF's rivalries to help pass the time this summer, and that won't make any sense unless we explain our feelings on this topic. So here we go.)

On sports talk radio where I live, the hosts are usually rational people with well thought out opinions. (I know that's a novel concept to those of you stuck listening to blowhards, failed gamblers, axe-grinders, and screamers all day long in Tampa, but I promise that this is true.) Sometimes, though, a certain topic or issue bends them out of shape and they react emotionally to it on the air. They call that "getting drawn offside."

No group of fans is better at drawing USF fans offside than UCF fans. They are the Steve Beuerlein of fan bases. They have little-brother syndrome, but instead of pointing their inferiority complex towards, say, the Gators or Seminoles, they've decided to make USF the target of their unending hatred. It's a completely unhealthy, sometimes dangerous relationship, and I can't believe how many Bulls fans get sucked into it.

All this scorn might stem from the early days of our football program. Before there was football at USF, the two schools played each other in just about every sport, and we don't recall there being any real animosity. But once the Bulls started playing football, that all changed. UCF thought that they had set themselves up as the gatekeepers. They would be the team USF would have to go through before they could have any thought of challenging Florida, FSU, and Miami. Unfortunately for UCF, the Bulls went right around them. Paul Griffin, Lee Roy Selmon, and Jim Leavitt wisely avoided the temptation of playing them for almost a decade, for two reasons. One, they were aiming higher than UCF. And two, they knew losing to the Knights in their formative years would cement the pecking order in everyone's minds.

They waited until 2005 to start a series, and USF ended up winning all four games. Only two of the games were competitive, and one of those two was because Leavitt, Wally Burnham, and Greg Gregory lost their collective minds with a two-touchdown lead late in the 2008 game and let the Knights back in it. In combination with their other landmark wins against Louisville, Auburn, West Virginia, Florida State, and others, USF is now widely recognized as being somewhere near the level of the "Big Three" in the state.

Every time the Knights lost to USF on the football field, it seemed to multiply their hatred. Maybe the all-time low was in 2007, when the Bulls came into the game with a #5 ranking. George O'Leary pretended not to know which conference USF played in, then tried to claim there would be 30,000 UCF fans at the game in Tampa. (He was off by about 25,000 fans.) Knights fans "poked" Matt Grothe incessantly on his Facebook page. Some people made fun of Shauna Moffitt (former wife of linebacker Ben Moffitt) and her appearance on a UCF message board. Finally, in one of the truly boneheaded moves by an opposing team or media outlet in our history, former Orlando Sentinel columnist David Whitley decided to wander around the USF campus in some kind of hat with UCF car flags sticking out of it. He posed on the iron bull statue in the athletics complex while wearing the hat, wrote his usual snarky and snide column, then ran the whole thing in the Sentinel two days before the game. 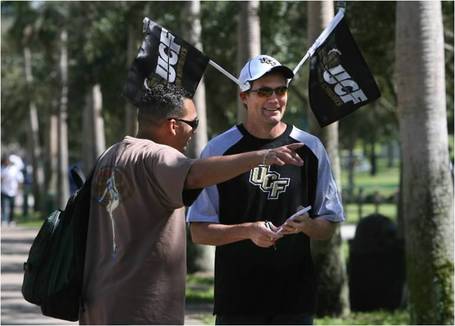 Needless to say this was all brought to the Bulls' attention in the locker room. The final score was 64-12, and it might not have even been that close. Late in the game, the Bulls threw deep and hit a 75-yard touchdown pass, then added a 28-yard touchdown pass on 4th and 14. Leavitt was obviously running up the score and taking extra delight in rubbing their noses in it, as if every unnecessary touchdown was responding to a specific jab that UCF had taken during the week. While it was fun to watch, it also proved that whatever grudge match exists between the two schools is more like a quicksand trap that both sides constantly sink into.

Here's the bottom line: This is a USF blog. We're going to talk about our school. If UCF does something right, we won't mention it. If they do something wrong, or if they have some stroke of bad luck or whatever, we won't mention that either. The only time we will bring up UCF is if our teams are playing each other, if we're both going after the same recruits, or as part of various Conference Realignment Rumors of the Week when they come out. We're going to do our thing, and they can do theirs.

We realize that at some point we may have to accept UCF as a conference mate. Whatever you think of the quality of their investments, you can't deny that they have put a huge emphasis on their athletic program over the last few years, and it's nearly impossible to find a BIG EAST expansion/replacement-team scenario that doesn't include them. Even if that does happen, though, we are not going to get caught up in the name-calling and mud-slinging that any discussion involving them seems to devolve into.