Half Hoops Drop The Akron Hammer On Zips

Share All sharing options for: Half Hoops Drop The Akron Hammer On Zips

Well that was... awesome. It's not often you get to bring the #1 team in America in any sport on your campus, and it's even more rare to beat them. And make no mistake, the Bulls were the better side on the pitch tonight. You can't watch that match and not believe that the Bulls are clearly one of the elite teams in collegiate soccer.  hey defended brilliantly, only really got beat once in the back (and not on the goal, that appeared to simply be a rare missed clearance), and showed some serious creative flair.

I was thinking Hasani Sinclair was going to be the offensive spark on this team, and he did earn a penalty kick in the 2nd half, but Bernardo Anor was the genius-at-large tonight. He scored on a clinical header to open the account, then went all Maradona in the 76th minute stealing a pass to gain possession, dribbling down the left side deep into the penalty area, and slotting away a far post strike to end it. When you make prodigal plays like that, you get forgiven for taking a lousy PK from the foul on Sinclair that was easily stopped. Two out of three ain't bad.

The Bulls missed a clearance two minutes after their second goal, and gave Akron's Darlington Nagbe a gift to cut the advantage in half. Nagbe also unlocked the Bulls fortress back line late in the first half as well, but his final touch went wide left from around the 6 yard box. It would be the best chance the Zips would get all evening.  Don't let the 11-1 differential in corner kicks and and the shots on goal spread of 11-5 fool you. USF beat  #1 Akron tonight, and not just on the scoreboard. Although the Zips made a frenetic push late, they were consistently turned aside by an excellent back line of Aubrey Perry, Marius Krathe, Andre Mittoo, and Javed Mohammed, as well as All-Interplanetary keeper Jeff Atinella, who's making an early push to play for Jurgen Klinsmann's 2014 World Cup roster. /youseewhatididthere??

More post match thoughts from a raucous USF Soccer Stadium, as well as some video and pics, after the jump:

The other thing that stands out on the evening is that there was a legitimate atmosphere throughout the stadium. The stands were nearly full, and the students behind the nets were in full throat. The vuvuzelas were blaring in the stands, and the "Ole" song was chanted over and over. The students banging on the signage on corner kicks or at other appropriate moments adds even more to a great match day experience for everyone but the opposing keeper.  It was a wonderful soccer atmosphere that would have any member of Sam's Army, the Screaming Eagles, or the Sons of Ben pining to get their education at USF. A huge thumbs up to the marketing and promotional staffs of the Bulls for getting Bulls Country excited about the match, and getting butts in seats. I've attended far too many USF soccer matches where Bob Uecker's "don't worry, nobody's listening anyway" line from Major League would have been appropriate. There were times I would be working in the press box, and would look out to see more people who I knew than who I didn't know. Those days, thankfully, appear to be in the past. Some really lousy video to give you a sense of the atmosphere below:

You could probably argue that the diehard Bulls in the student body are more excited about men's soccer than men's basketball. I certainly saw more students out there tonight than I've seen at some of DoJo's games over the past couple seasons. And the fact that a soccer-only facility, one that will rival any on a campus in the country, is opening in 2011 should have you giddy with anticipation. As fans of many clubs across the planet know, the dreaded moat known as the athletics track really hurts in terms of creating atmosphere for football. The new facility will have an intimacy bringing fans that much closer to the pitch, and berm seating around three-quarters of the touch lines.  Between the singing, the knowledgeable fans, the vuvuzelas, and the consistent quality of the program, I dare say there might not be a better place to watch soccer in America next year.

But we've got a nationally competitive club to deal with this season. With this win and performance, the ceiling is officially off the 2010 USF Bulls Men's Soccer Team. Let's ride, gentlemen. 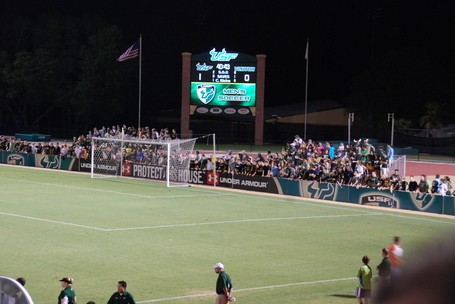 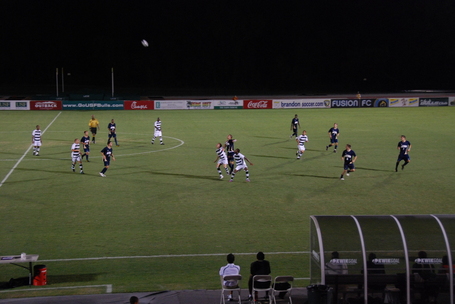 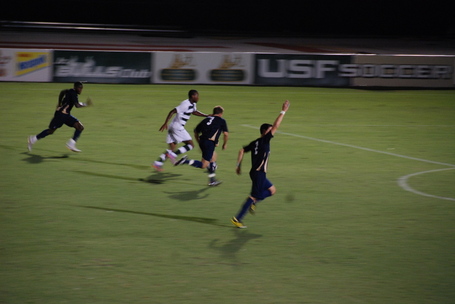 Sinclair getting behind the Zips line, forcing the foul that gave the Bulls a penalty kick 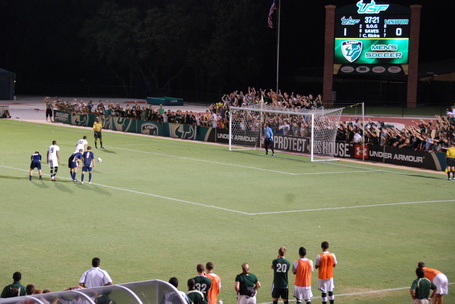 Anor lines up to take the PK 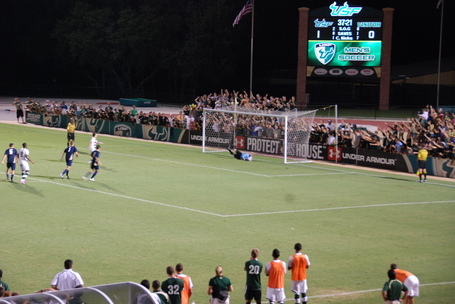 Oh, well... um, yeah.  It's ok because he scored two wonderful goals, but we didn't get any shots of those sadly. 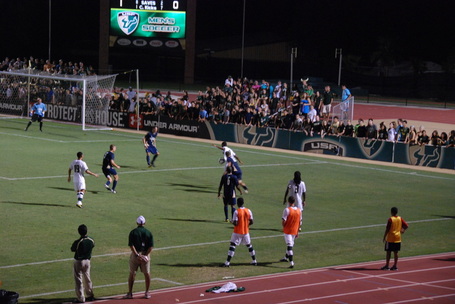 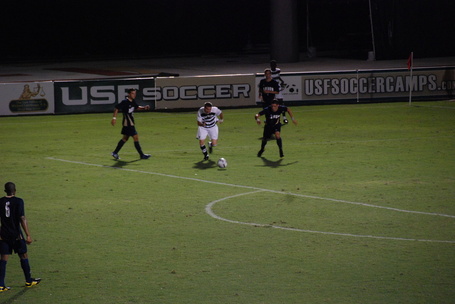